So what have I been up to post-Rolex? Quick recaps -- Sunday (of last week, not last Sunday, oops) on my drive back I stopped for lunch with my dad. Then after I made it all the way home, my mom came over to marathon Downton Abbey with us before she left on a trip. The Monday after Rolex was gross and cold and rainy, but I did sneak out to say hi to Ruby. Tuesday was beautiful, but it was also my aunt's funeral, so no horse time then. Wednesday was rainy and gross (and chilly!) again. Thursday it finally got nice, but DH didn't have time to drag the arena at home, so I went out to ACS and rode Ruby. Nothing earth shattering, mostly just walking, since she's been off so much lately. Friday was absolutely gorgeous and DH dragged the arena -- but I had a wicked migraine so I spent most of the evening in the fetal position on my couch with margaritas (because a migraine is no excuse to ignore Cinco de Mayo!). 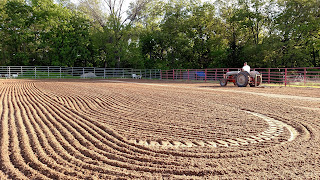 Saturday I finally felt sort of human again (after a solid 10 hours of sleep), so I planned a long day with the horses. I went out to the barn early to take Ruby on a trail ride with my favorite munchkin -- she is the kid of a college friend, and basically the only child I can tolerate for any length of time without wanting to strangle. She's an excellent little horsewoman and gets better all the time. She has a new-to-her horse that she's developing a partnership with, and I got the pleasure of taking them out together on their first real trail ride as a duo! My BM (her instructor) had taken the horse out and made sure he was comfortable on the trails, and earlier in the week they'd worked on the creek crossing, but it was her first solo venture out and we rode for ages! Her dad actually got concerned because I was supposed to text when we got done and we rode so long he thought something had happened, haha. Both horses were fantastic (although Ruby was fairly annoyed at first that it was a walk-only ride, especially since we'd been doing so much trotting and cantering for conditioning on the trails pre-Rolex). 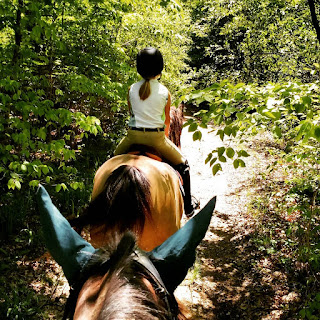 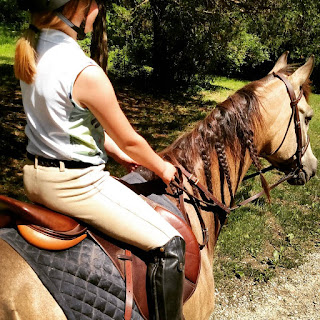 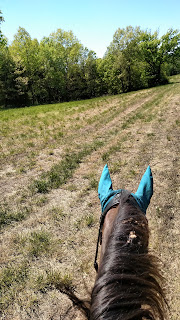 After our trail ride and chores, I gave Ruby a spa day -- she was pretty grungy, had a mohawk where her bridle path should be, and had started rubbing her tail... ick! We both ended up soaking wet and sudsy (I don't know how people bathe horses without also bathing themselves, that's a trick I've never learned). 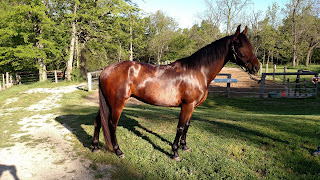 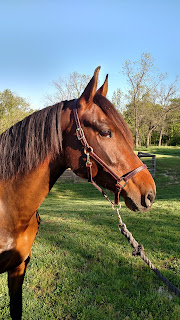 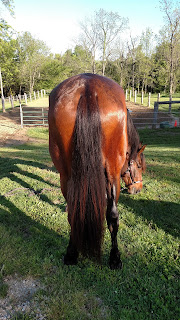 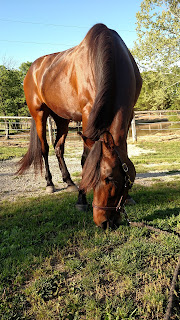 Then I headed home to sneak in a session with Cinna before I lost the light. I haven't worked her in the arena since we fenced the adjacent lot for the goats, and I wasn't sure how she'd react to having them a few feet away. Obviously no need to fret, after eyeballing them on her first walk around the arena, she settled right in to work like a champ. She was slightly more concerned when DH started welding around the corner of his shed (so she could hear and probably smell something, but not see it), but we only had one minor bolt at the canter and she got over it quickly. The goats were actually probably more freaked out than she was -- the first time I asked her to canter they all went tearing back over to their shed, and it took them a few minutes to venture back... haha. 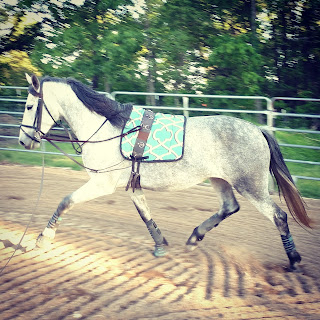 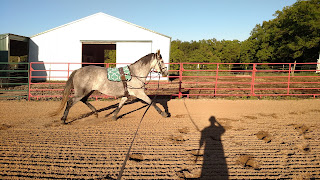 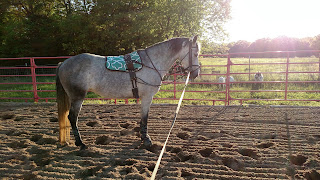 Sunday it was finally dry enough to mow, so after spending an hour on the mower, I attacked my tack shed. It's been lacking some organization for a while now, and after trying to squeeze my Rolex purchases into it, I started to get annoyed. So I tore everything off the walls and out of the trunks and reorganized! I also had to come to grips with the fact that I'm hoarder, and have wayyyyyy too much stuff. I threw away some old broken things, set aside some stuff to sell, and then culled my halter collection -- I had close to 40 halters... which is kind of overkill for 4 horses? So I kept my specialty halters (Spanish show halters, lunging cavesons, leather halters for traveling, grazing muzzles, etc), threw a few spares in the trailer for emergencies, and then made a pile to sell after picking out decent ones for daily use for the 3 at home (Ruby has her biothane one so I figure she should be set for a while).

I should have gone out to work Ruby also, but DH took the truck to do fence and I hate driving my car to the barn (and our second truck had a flat, which also meant I couldn't take the horse trailer anywhere all weekend, which royally sucked), so I used it as an excuse to veg on the couch with all the windows open all afternoon and catch up on my DVR (which was alarmingly close to full, haha). I rode the baby horse in the evening, but since I have lots of media, that can be a post for tomorrow! ;)
Posted by TrainwreckInTeal at 6:00 AM