Shockingly enough, after my whiny post about the weather last Friday, it warmed up to a tolerable temperature in the afternoon, so I actually worked both horses! No one was home but me, so I was limited to lunging Cinna, but we had a really good work session reinforcing all our verbal cues (sometimes she feels like “walk” is optional and just wants to zoom around). Once she got the zoomies over with, we had some really nice consistent steady trot, and some lovely trot-canter and canter-trot transitions. 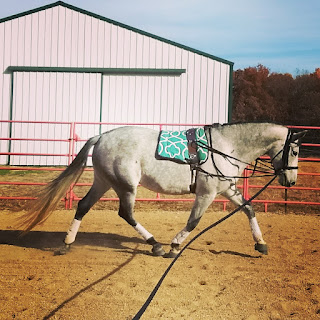 Apparently I forgot to video Friday, but this video from the previous Saturday is pretty indicative of what the trot looks like with some consistency right now.
Last week FB memories was reminding me about her first show last fall so it was fun to rewatch that video and compare to where she is now. At the time of that show we were barely in the double digit under saddle rides (the show was ride 13, haha) – now we’re… slightly higher than that? Her work has been totally irregular for her entire life, but she almost inevitably picks up just where we left off. After we got done working, she was still a little warm, so we hand walked down the driveway, and then down the road a bit.

I had grand plans to do a really lengthy no-stirrup ride on Ruby Friday afternoon, but my plans got slightly derailed when I got to the barn and discovered that someone had pulled a hit and run on a huge section of fence in front of the barn. Thankfully it wasn’t fence containing any horses, and the driver managed to (narrowly) miss hitting the trailers driving through a SECOND section of fence. But of course it made for a very exciting afternoon with the state Highway Patrol coming out. Miraculously enough, the person was caught, and BM’s fiancée already put the fence mostly back to rights, so the long term impact will be low. But it certainly rearranged my afternoon schedule a bit! I did manage to climb on Ruby shortly before sunset and we did ride, it just wasn’t quite as productive as I’d initially planned for.

Saturday the weather was beautiful (well, beautiful for November?) and I was determined to make the most of it. I got some outside things done at the house in the morning, then headed out to the barn early enough that I could ride before doing chores. Not only did we have a really excellent no-stirrup ride (I’m shocked at how much longer I can sit her trot even after only 4 rides, clearly I need to ride sans stirrups more often than just November?), but I also dragged out the bridge again and we worked on that again too. I’m not sure where the panicky/rushy/whatever issues with the bridge came from, but by the end of the ride Saturday she would step up and halt on the bridge without immediately flinging herself off the side, so that’s a win. 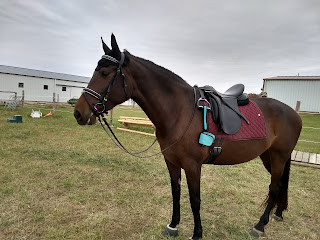 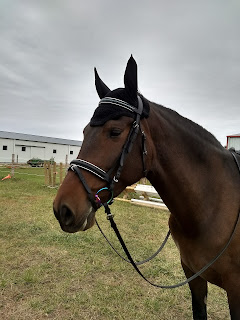 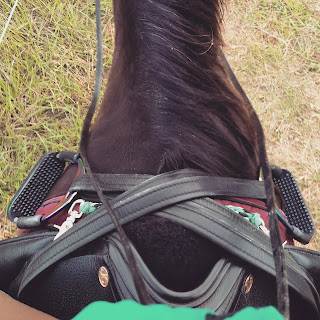 It was dark when I headed home, but I grabbed Cinna, flipped the lights on, and did another brief lunge (in just a lunge cavesson this time) and we worked more on verbal cues, including switching directions on the line, which I am not sure I had gotten around to teaching her. I had to stop mid-session and unclip her so I could climb the arena fence to break up a cat fight (is this really my life?) but when I came back she willingly went right back to work. We didn’t work long, and then at the end I let her play on the line a little. 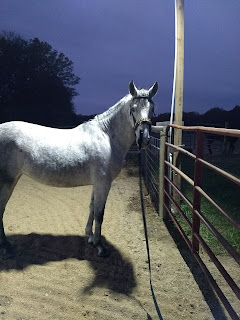 She kept burying her nose in the sand and just standing there. She pawed once or twice, so I thought she might want to roll, so I unclipped her and let her wander off the line for a minute, but then she just came back over to me and rubbed her sandy face all over my jacket (thanks mare).

Sunday my plan was to ride her and get some new photos, but it was kind of drizzly and grey most of the day, so I ended up binging Mindhunter on Netflix with DH and dachshunds all day, minus a brief grocery run to town. Ah well, it happens. 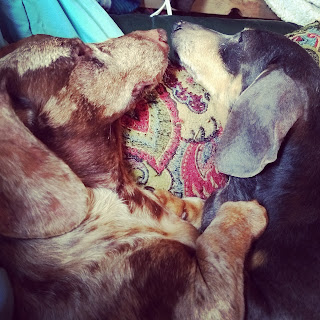 Last night I was scheduled tight on time with a GMO meeting in the evening (and a 1.5 hour round trip drive to/from the location), but I did manage to squeeze in a short ride on Cinna between work and leaving for the meeting. She tacked up in the quickly fading light, and then I flipped on the lights and headed to work. She was back to gnawing on the bit for about 60% of the ride, but it also wasn't the one I worked her in on Friday, so I guess I'll swap back to that one for riding. I have three or four bridles set up for her and normally just grab at random, but clearly I need to go back to what's working for her -- the HS baucher on my Otto bridle ;)

It wasn't a groundbreaking session in any way (mostly just highlighted both of our lack of fitness and all our inconsistencies under saddle), but it's nice to be working towards some semblance of a riding routine during the darkness of late fall/winter in the Midwest!