Trigger's hoof is continuing to heal at an absolutely glacial pace, haha. Logically I know how long it takes for hoof to grow out, but mentally I am still struggling with how slow it is, ugh. I was going back and forth all week about calling the vet to come look at it again, but I had a farrier appointment scheduled for yesterday so I figured I'd pick my farrier's brain about it a bit and then bring in the vets if necessary after. My biggest question was WHEN CAN I TURN THIS MF-ER OUT AGAIN WITH NO HOOF WRAP, because trying to keep a wrap dry in Missouri in March is... not possible. Particularly as we headed into five straight days of rain where they were calling for between 4-6" total for our area.

Random hoof photos from the last six weeks, because new Blogger won't insert them in the order I select anyway (HATE) and they all look sort of the same so it's not like I can organize them just by looking, lol. 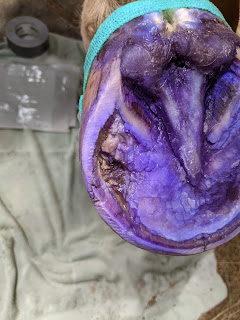 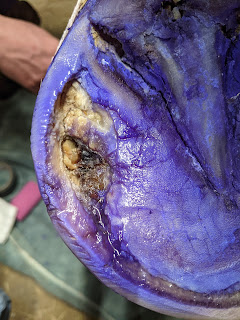 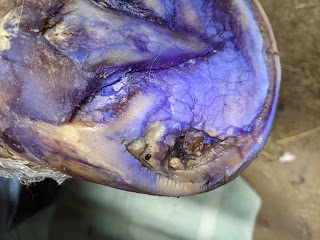 I did ask my farrier if he'd ever used Keratex hoof putty, since that was an option suggested to me by a friend as a way to seal up the hole and keep mud out of it that was way less labor intensive than the constant duct tape boots. He didn't seem impressed with the idea, but offered an alternative option if I wanted more worry-free turnout (although let's be real, I'm ALWAYS going to worry. It's what I do. Neurotic is my middle name).

Of course, while I was waiting for the farrier to show up, I had already made a duct tape boot, so I went ahead and threw it on him (because let's be real, I can't undo all my neurotic tendencies overnight lol), but instead of my normal 5-layer concoction, I just did the duct tape, a little vet wrap, and a little more duct tape protection at the toe. Baby steps. Once I cut that one off I'll try really hard to let him go out naked #progress
Trigger didn't show a single sign of discomfort during the trim, and then all the poking and prodding we did at his feet afterwards, and he cantered off sound as a dollar when I turned him out, so I think we can all agree that I need to calm down... haha. It was also interesting to note that of all the horses, that hoof had the single most growth of any of the feet. I should have taken a comparison photo of the trimmed off piece! So. Fingers crossed that we are in the last stage of this saga and that Trigger might even be able to resume the occasional trail ride this summer once that section grows back in :)