So I did manage to do some horsey stuff early last weekend before the hay-stravaganza took over my life. Friday I took Ruby on a lengthy trail ride with one of the other boarders, and since the swelling was pretty much gone, I let her trot and canter. Aside from a reluctance to maintain the left lead, she was really good! Still short striding a tiny bit on that LH, but WAY better than she was the week before. 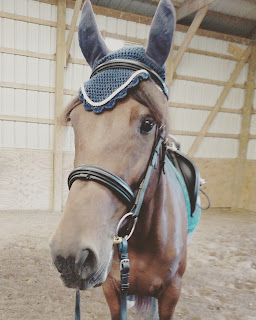 I also managed to get Cinna out briefly for a stroll through the woods (yay, trying to keep up with my written goals!). I got smart and started out with the two leads (regular and stud chain) this time and she was really good. A little more up in my personal space than I normally tolerate, but when she’s freaked out she wants reassurance. And the sheep/goats next door were in the adjacent pasture and they were concerning her greatly, so I’d rather have her a little too close to me than rearing/flailing/bolting/any of the other number of things she could have done.
Saturday I was really hoping to sneak in a ride on Cinna before DH headed off to work, but that didn’t happen, which made me a little grumpy. After barn chores I did manage to get Ruby lunged, and while she was still a little more reluctant than normal to maintain her left lead (which is typically her “good” one), everything else was great. Saturday night I had a fun night out with Hanna and another friend. We went to a local-ish Mexican place and I took full advantage of their jumbo margaritas being on special, while eating my body weight in chips and salsa. It’s been a while since I’ve gone out with friends and just had a good ol’ fashioned gab fest, and we had a great time! Of course, it also meant cleaning stalls at home at like 10 p.m. while still being slightly buzzed, but whatever, lol. 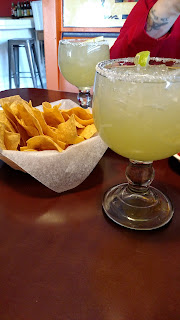 Sunday morning was hoping again to sneak in a ride on Cinna, while DH was home, but he got a call from the farmer we do a lot of hay with that he needed help, so we headed off to the farm. Normally I just hang out and wait for them to put some bales on the ground and then drive the truck or tractor pulling whatever they’re loading bales on, but there was so much to be done this weekend that I got drafted into helping get one of the fields raked. Once I got the hang of it, it was actually pretty fun! My Type A personality really enjoyed the long, neat rows of grass -- even though the raggedy edges where the hay was cut around ditches and wouldn’t rake well annoyed me, haha. I’m assuming I did a pretty decent job because the guys came over and just started baling it, they didn’t redo any of the lines I already did.
We spent all afternoon out in the fields, and just made it home in time to do chores. I was still pretty determined that I was going to make progress towards those goals from the other day, so before I turned her out for the night, I squeezed in a lunge session with Cinna. She did SUPER -- she’s really starting to get “whoa” down, and making serious progress towards more solid canter departs. And I saw moments of some nice, rhythmic, cadenced trotting that made my little heart go pitter patter <3 I know I sound like a broken record, but I’m so in love with her. She is everything I wanted -- momma’s looks with better gaits (like dad). Ideally I’d love it if she were a tiny bit less neurotic, but she’s kind of a carbon copy of her mom like that too, and mom got better as she got older, so I just have to wait it out.
Sunday was another long day in the hay field -- about twice as many hours as Saturday. It was more tiring, so nothing much to talk about there. After it was over we zipped by the barn to check Ruby’s leg (still looking great), then went home and crashed.
Yesterday was back to work for me, but a few more hours in the hay field after work -- but the reward? A nice big trailer full of beautiful hay for my guys! Hopefully this is the last load we’ll need for the year. We might pick up a few more bales here and there, but we put up about 500 square bales this year, and with what we had leftover when we started the summer, that should about do it! It’s such a comforting feeling knowing my horses will be set for the winter! 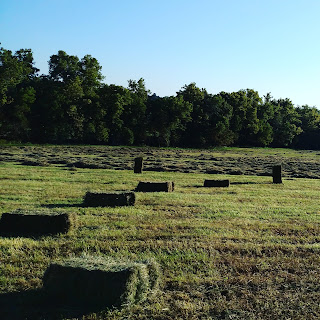 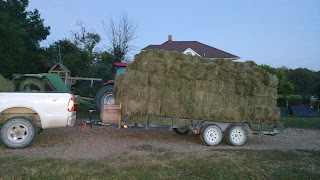 Posted by TrainwreckInTeal at 6:37 AM