On Thursdays We Wear Teal

Monday night, I had my normal appointment scheduled with my hairdresser for a cut, and he had a surprise waiting! 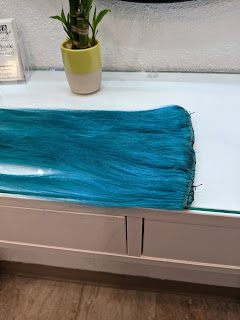 He's been cutting my hair for NINE years at this point (😳), and over the last few years we talked about teal highlights a few times. I always hesitated because I work in a relatively conservative office job, and while I'm not super customer-facing, I still worried about being viewed as unprofessional. Now that I WFH, I was far more willing to go for it, but my stylist had a better plan -- clip in teal extensions made from real hair. He was making another color for another client and had some leftover, so he made two for me!

It was definitely just what I needed to get me out of that "it's the 181st month of 2020" rut I feel like I've been in for the last few weeks. I don't wear my hair down too often (it's so much work, ugh), but now when I do, I can brighten it up with a splash of color!

Posted by TrainwreckInTeal at 4:30 AM 6 comments:

After a lot of requests, I attempted like fives times to make a video tour of the tack room last summer/fall -- however, I HAAAAATE listening to the sound of my own voice, so I kept trying to narrate them and then watching them and cringing. So I made this totally silent one that I hate less lol. Looking at the details of the vid it looks like I made it right before Trigger kicked off hoofgate (still giggling to myself okay), so that must be why it slipped my mind. Enjoy! If you have any questions, drop them in the comments. I have been posting the page with alllll of my links and a lot of my photos in one of the barn FB groups I'm in so those pages are getting a lot more traffic than I ever anticipated when I started this project last year!

See what I did there with the title? Gosh I crack myself up. Gotta find entertainment where you can, right?

Wow I was sort of on a roll through December and then things just sort of... screeched to a halt. Sorry about that! We're mired deeply in the mid-winter blues here.... where I'm riding when I can, wishing I could ride when I can't, and mostly ready for the days to start getting longer and the mud to dry. Based on how much rain we got yesterday, I don't anticipate that being any time soon. I'm also fighting some exhaustion and burnout compounded by some SAD -- not job-related specifically, because I do love my job, but just feeling stuck in this endless rut with the pandemic and not feeling like I can make plans. It's a super first world problem, I know. I recognize how lucky I am that I can WFH and that the vast majority of my life hasn't really been disrupted minus working here vs my office now, but I'm still struggling. Even without a pandemic, I tend to get this way in January/February most years now that the horses are at home year-round and the lack of an indoor makes me more vulnerable to the weather -- I was able to mostly head it off last year because I was on such a personal-development-high from giving those training sessions, but I know in 2018 and 2019 I dealt with the same things, and also like pre-2014 before I boarded one out to ride. I'll get over it, I'm just writing this to remind myself next January when I'm in this same slump that it will pass.

Trigger's hoof hole is still on the mend -- last week I called up the vets to schedule an appointment for yesterday to check the progress and see if we're ready to change up the wrapping situation or move him up to more turnout -- he got a couple of days between bouts of nasty weather earlier this month, which he LOVED, but then it snowed/got muddy again and then yesterday we got a rain dump. We're reaching a point where his (already shitty) feet are getting SO SOFT AND CRUMBLY from the perpetually damp environment, blerg.

It was sort of a good news/okay news type of visit. The good news is apparently I'm doing an above adequate job of keeping it clean (as in, it was a bit of a struggle to get the duct tape boot off haha). The vets weren't nearly as horrified by his crumbly feet as I was (or if they were, they hid it better?), and they okay'd the application of durasole when I do bandage changes to start trying to help the rest of the foot recover from the moist environment. They also signed off on having my farrier trim that hoof at my normal appointment this week (we skipped it last time, although we did get the other 3 trimmed). 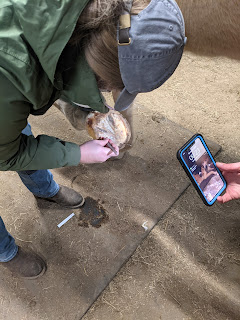 The okay news is that while it's healing, it's not happening as quick as they would like. Whether that's a combination of hoof growth just slowing down in the winter, the fact that he's older, the fact that his feet aren't really great to begin with? Who knows. Nothing wrong per se, they'd just like to see things moving a bit faster. So we discussed two options -- one is a hospital plate, which we have definitely talked about in the past (and my homework was to ask my farrier this week if he has experience applying one, and if not, get alternative farrier recommendations from them), and the other option was to trim back a little of the scar tissue, start applying a steroid ointment to that (in hopes of slowing the regrowth) and see if maybe the hoof will start filling in a little more. After probing the tissue and being able to see behind it a bit, the vets decided to trim it down and see if we could jump start some more filling in. The hospital plate may be in our future, but in the mean time, we're just staying the course.

Keeping it wrapped and him stalled 24/7 isn't anyone's favorite course of action, but the drawbacks to turnout in Missouri's wet mucky season with an open/unhealed hoof hole are just insurmountable right now, without spending $$$$$$$$$$ on some sort turnout with the grids to prevent mud (which is on my long-term to do list, but can't be done RIGHT NOW for a variety of reasons).

Instead, enjoy two little clips of him trotting/cantering around the field this weekend. I showed the vet, with my permanent caveat "well he wouldn't jog sound at Rolex, but..." and they were excited to see him looking so comfortable and moving out so well.

So for now, that's where we're at! I am actively trying to work myself out of this rut, and I did find a video tour I did of the tack room sometime last fall and then forgot to post, so look for that tomorrow! :)

Posted by TrainwreckInTeal at 3:30 AM 16 comments: