Can We Hack It?

OK so one of the half-finished drafts I’ve had sitting around for weeks relates to endurance. Specifically, after reading quite a few endurance ride recaps and following some bloggers who dabble (or specialize) in it, I’m getting really intrigued. I don’t think it’s a secret to anyone who has read more than two or three of my posts to know that I get pretty bored in the arena.

Don’t get me wrong, I absolutely see the value of arena work, and that’s where Cinna will be for the foreseeable future (as she is not trustworthy above a walk on the trail yet). And I’m still looking into restarting lessons again this summer, because correct dressage is the basis for SO MANY things, and I really do enjoy it. Also I guess there’s the whole president of my GMO for the next two years thing also? Yeahhhhh my timing is excellent.
But things are different with Ruby. I noticed last spring she seemed to be getting a little… for lack of a better word... stale, in the arena. I made a significant effort to mix things up by not only working in various arenas, but also doing dressage work on the trail and out in the fields, and that seemed to help for a while. 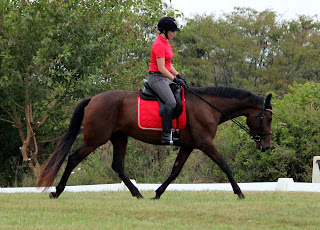 But by last fall, I think we were both fairly burned out again. Some of our favorite outings last year were exploring new trails with friends, particularly the hunter pace! One of my goals for 2017 was to do more cross training, including jumping, because Ruby really seemed to enjoy it. And I’m not about shoving a square peg in a round hole – if my horse doesn’t want to do dressage (or just dressage), we’ll find something else. And I get the impression from her lately that she’s ready to branch out.
She never gets tired on the trail – she will trot along, swingy and soft on the buckle, for as long as you’ll let her. She eats up miles with her ground-covering walk. She’s gotten more or less rock solid about passing just about anything weird you might see out and about – and while crossing unfamiliar water still needs work, it’s definitely in her wheelhouse.
So I started doing crazy things…. Like joining endurance Facebook groups so I could lurk and read. I explored the AERC website. I even went so far as to find some rides in my state, including one on my birthday weekend that offered a 10 mile intro ride. Then I bought a hackamore, so that I could let Ruby graze on the trail. And in my defense, I did already own a fugly nylon halter/bridle that I got in a tack lot at the auction, so I didn’t even need a new headstall for it or anything. (Also, I found pictures online of really cool customized paracord-covered hacks and showed them to my paracord goddess who told me she could deck mine out in teal/black)
But here’s where I probably jumped off into the deep end – I might have talked DH and my mom into going in together on my early birthday present….. a flex-tree Tex-Tan endurance saddle on consignment at my local tack shop super cheap because it needed a good cleaning and some TLC…. Oops? 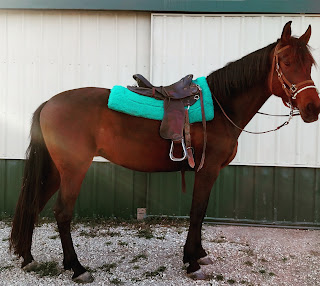 Anyone who knows me knows I really can’t do anything halfway – once I’m interested in something, I’m kind of an all or nothing person. And occasionally those phases pass – I bought a doma vaquero saddle for Topaz and briefly got super interested in traditional Spanish tack and attire… thankfully that (expensive) obsession flamed out quickly (although I do still have that saddle...).
Or driving – DH was interested in that, so I got him a driving horse, a harness, and cart… which we used all of, maybe two times? Yeah epic fail on us there. So this might just be a passing thing…. Or it might not. I don’t think I will ever have the time or access to space to really train for 50 or 100 mile rides (nor is my breed choice ideal, haha), but there’s really nothing stopping me from dipping my toe in some intro or LD rides. 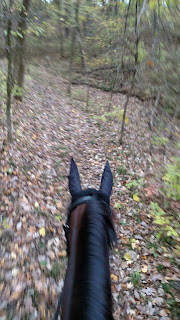 So let’s hear it from my endurance friends – can we hack it? Give me all your favorite resources for a total newbie! I’ve been reading up on vet checks, containment systems, conditioning, electrolyting, tack options, heart monitors, shoes vs boots, the works. I’m still in the completely and utterly overwhelmed stage right now, so what I’d love to do is find someone local with experience who would let me tag along and answer dumb questions for a while, and maybe find someone who could accompany me to an intro ride or two (or maybe an LD, if I get super brave). Anyone have any central Missouri endurance contacts? 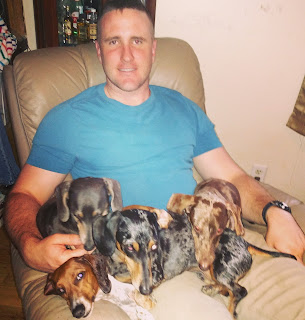 Also, thank you so much for all the kind comments on the last post. We got good news Saturday and Monday night in regards to test results, so we're definitely heading in the right direction! DH is still fairly down (medication side effects are the worst), but hopefully will bounce back in a few weeks.
Posted by TrainwreckInTeal at 6:00 AM