This show was nicely average in terms of experiences -- it could have gone a LOT better, but also could have gone a LOT worse. I woke up well before my alarm on Saturday morning and decided I might as well get going. I wasn't sure how Cinna was going to load, so I allotted plenty of time to get her on the trailer, drive the hour to the facility, explore and acclimate, tack and warm up, all before our 9:12 ride time for our first test. We've been working on loading unassisted for the last few weeks, and have gotten to the point where she follows me on with minimal hesitation. Saturday wasn't quite as quick (we were loading in the dark), but I stayed calm and she didn't melt down, and I waited her out -- she finally heaved a sigh and climbed on, and started munching hay. I didn't clock it, but my guess is less than 5 minutes. 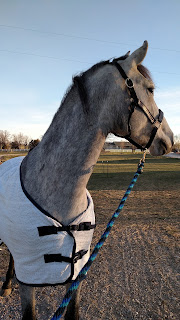 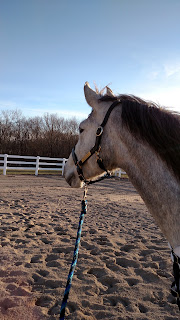 Of course, this actually put us ahead of schedule, so I swung by the gas station for snacks and we had a leisurely cruise up to the facility. We ended up being the first ones to arrive, so I kinda felt bad! I checked in with the facility owner, and made sure it was okay to unload and hand walk in the competition arena before things got busy. Cinna was very interested in checking everything out, but not unmanageable (I had a stud chain in my jacket pocket, just in case!). We looked at (and ate cookies off) the scary judge's stand, checked out our reflection in the mirrors (that might have been her favorite), and just generally investigated everything. She seemed alert but not concerned, so I felt pretty good about things. 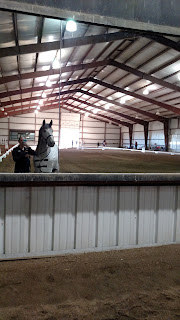 We headed back to the trailer and I tacked her up and got changed, then headed to the outdoor to warm up. During our handwalk, we had checked out the outdoor, but I guess I didn't introduce her well enough to all of the jumps stored on the sides, so between those and the jumps in the cross country field past the arena, she couldn't figure out where to put her eyes or what to spook at next. She was especially recalcitrant to ride past a jump painted to look like dominos outside the arena... every time we attempted to ride by, she got bug-eyed and went sideways. If my life were an Eventing Bingo card, we were 100% "that horse" in warmup... haha. Although for all her spooking/stopping/eyeballing everything, there were no bronc attempts and she wasn't rank at all -- just worried.
Our first test was disastrous (don't worry, the second wasn't much better!). It's been so long since I really had a baby baby in a new place, I forgot how much is terrifying. She was pretty good at WWU last fall, but mentally comparing the facilities reminds me that WWU is SUCH a good first show because there are minimal distractions. The facility from this weekend is lovely (my favorite place to show besides WWU), but there were lots of things outside the court to gawk at (open doors, people, chairs, poles, mirrors, a sawdust pile, dogs... who knows what else). The nicest thing I can say about our test is that we stayed in the arena, I stayed on, there were no rodeos, and we did an approximation of all the test requirements in close to the appropriate letters (which was my goal!)..... haha. Cinna was tense and bracey, and also not listening super well, all of which reflected in our (low) scores.
As I headed out to the outdoor to stay limber for our second test, one of the bystanders commented that I seemed so calm -- I laughed and told her it was a fun show! We were there for the experience, and that's what mattered to me. About the time my first test ended, my mom showed up to cheer us on and show crew -- having my mom there really helped (and not just for the photos!). I gave her a pocket full of treats and we went back to the outdoor to work by the domino jumps that were so scary -- as with any "scary" thing for Cinna, they got much less scary once she got to eat treats off them, and mom played "human wall" and treat dispenser every time she walked by them without corkscrewing her body sideways. When the arena emptied out, I actually had her canter both directions, just to see if we could and keep her brain in her head -- success! 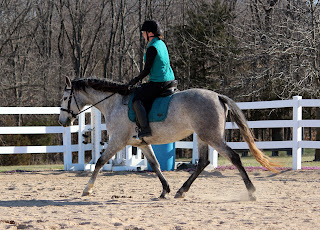 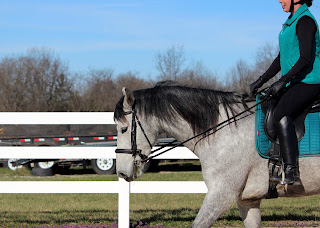 I felt better heading in for our second test, but we had the same issues with "scary" things outside the arena. Our free walk half diagonal was directly at something she was scared of (poles piled outside of the arena), so when we reached it, she stopped and started backing. I don't typically ride with spurs and I didn't have a whip, so I finally had to resort to Pony Club kicking to get her to move past it (you can imagine how well that scored, oops!). I just laughed at her shenanigans, and I was still giggling a little at our final salute. She walked out on a loose rein, and I praised her. 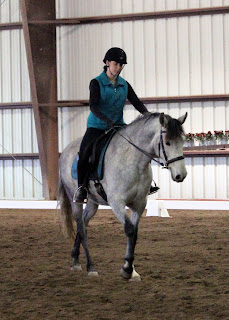 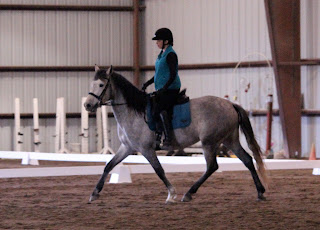 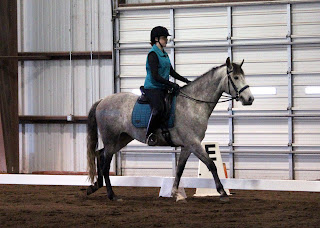 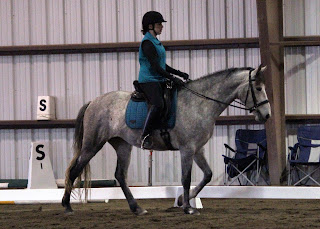 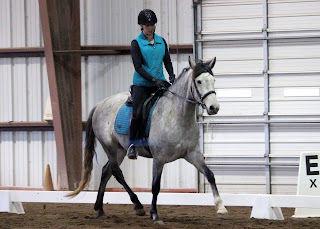 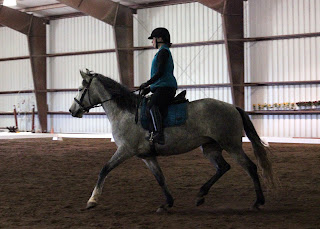 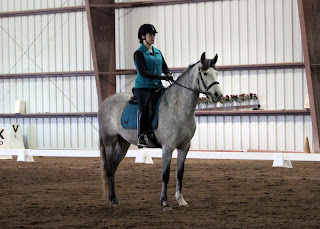 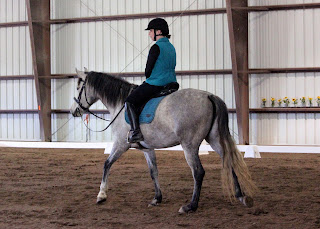 We went outside and talked over the test with my mom -- Cinna cocked a leg and watched all of the goings-on with interest. After chatting with some friends, we headed back to the trailer and I left her tied with a bag of hay. We were done by 10:30, but I wanted her to have some grown up show horse experience and hang out at the trailer -- something I pride myself on is horses who can be tied with a hay bag/water bucket and left for hours without issues (not necessarily unattended per se, but you don't have to babysit them). She exceeded all expectations there, as I wandered around the field chatting with lots of friends (keeping an eye on her from a distance). I trusted her enough by the end to run up to the show office and grab my score sheets and goody bag!
Finally it was time to load up and head home so I could go out and do chores at ACS (and ride Ruby, which will be an entry for another day!). Cinna was a little balky about getting back on the trailer, but I wasn't in a hurry so I leaned against the far wall and posted FB updates while she thought about it, and eventually she climbed back on. We had an uneventful haul home, and when I turned her back out with the boys she had a good roll and then headed for the hay bunk. 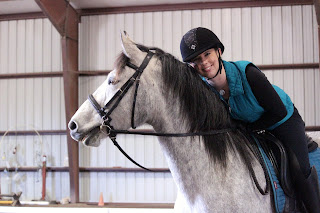 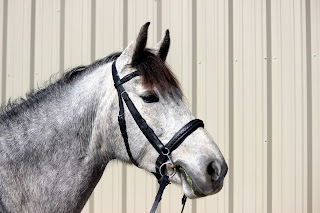 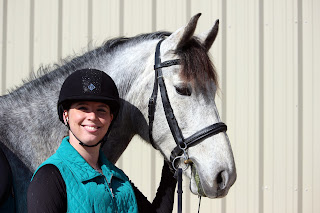 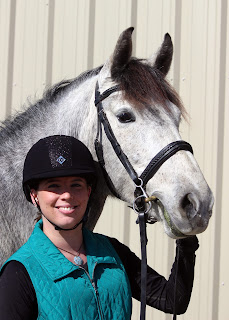 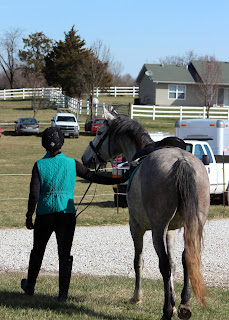 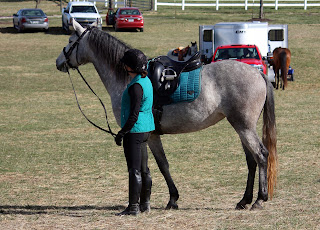 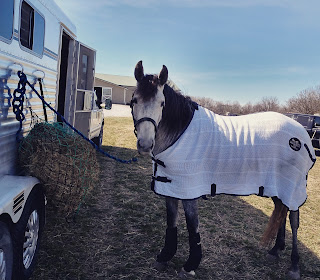 Ultimately I was super pleased with this excursion in terms of inexpensive exposure and a good schooling experience. Hopefully as the summer goes on and she is in more regular work, we can have some more consistency and trust at shows -- which I think were the big things lacking this weekend. Also, just for funsies -- a collection of wannabe lateral work when heading down centerline seemed too hard... lol. Enjoy! 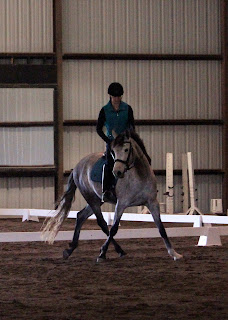 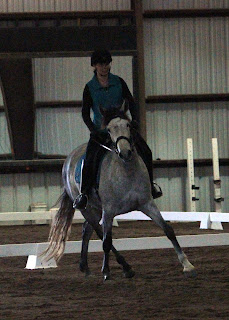 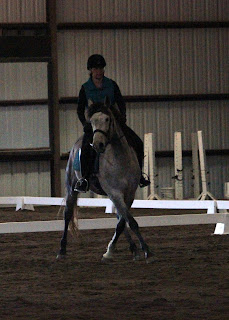