Last Sunday, I made plans with fellow blogger Kaity to hit the trails with Cinna and DH’s horse Trigger – initially he told me he would be busy with schoolwork all day (this was like the 5th Sunday in a row I had wanted to trail ride but he didn’t have time, so I finally got tired of waiting haha). He ended up finishing up right before Kaity arrived, so we quickly adjusted our plans and threw Jack in the trailer as well, then headed off to the Katy Trail (I’m just now appreciating the irony of taking Kaity to the Katy, lol)! I initially wanted to try out somewhere with less foot traffic like Rudolf Bennit, but I forgot it was hunting season. Boo. On the plus side, the Katy is flat and has great footing, which was good for the geriatric geldings (especially Jack, who doesn’t always know his own limits).
The horses all loaded up with a minimum of fuss, and we hit the road! I opted to ride in my western saddle for extra security, one of her normal dressage bridles, and then a rope halter with lead over the top just in case. I was wearing jeans and boots, but my sparkly helmet, so I’m pretty sure we were an entertaining sight to anyone who knows anything about equine disciplines – mix and match!

Kaity was a good sport about riding Jack, who is not always the most pleasant horse to ride. While he’s better on off-the-farm trail rides, he still does get amped up and want to trot a lot – she handled it with grace though, and kept his jigging to a minimum. It actually worked out really well to have him along, as his walk matched Cinna’s in terms of pace and he is her BFF, so he acted as a security blanket whenever she was scared (and the equine version of a bumper car whenever Cinna forgot how to steer). 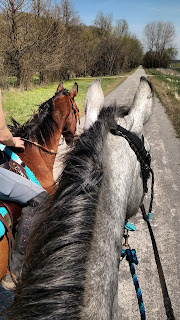 There were some really good moments, and moments of baby brain. She confidently walked out for a half mile or so with Jack at her side, but then promptly came screeching to a halt at the first wooden bridge crossing (in her defense, Jack wouldn’t cross it until Trigger did, and even Trigger fussed a little more than normal – even though they’ve both crossed that bridge at least 10 times in the past 2 years). She danced at the edge and I could feel her gearing up for a major meltdown. She got really light in the front end and I could tell she thought the appropriate reaction was to launch onto the bridge, so I tried to diplomatically shut that down. About the time I was seriously considering climbing off to hand walk her over, she finally took a tentative step onto the bridge, and I thought we were home free. She made it about 4 steps before the noise of her hooves on the planks unnerved her and she took off trotting as big as she could manage. This is where I probably didn’t help things, because I burst out laughing and that scared her even more until she could catch up to the boys and bury her nose in Jack’s butt for comfort. On the way back, she crossed it with much less fanfare, although she still was coiled tight waiting for the bridge trolls to attack or something, lol. Work on bridges in the future, noted. 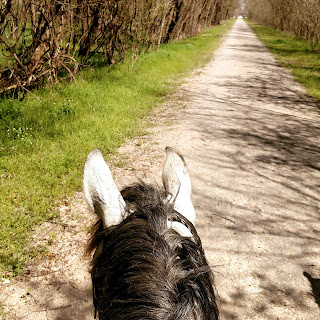 Aside from that, she was remarkably well behaved. We did quite a bit of walking on a loose rein, and she and Jack kept pace together really well (with Trigger usually lagging 10-50 feet behind, which is pretty typical for him haha). She gave the hairy eyeball to a group of pedestrians that walked past (in her defense, several of them were kids with large sticks and she couldn’t wrap her baby brain around that), but she wasn’t naughty. The only other baby moments were with the bicyclists – my experience with bicyclists on this trail has been hit or miss. Sometimes they’re polite and follow the POSTED rules of the trail (which is to yield to equestrians and announce their presence), and sometimes they’re road warriors who think it’s appropriate to just blow right by and cause issues. 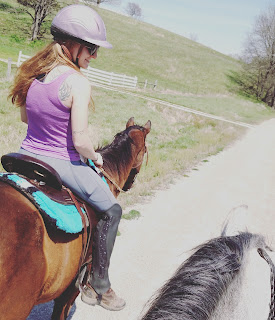 The first group we encountered was one of the former, thankfully. We saw them coming quite a ways off, and as they approached, I elected to dismount and walk her by them. They saw me get off, so they pulled over to the side of the trail and stopped and let us walk pass (bless them). Cinna had a brief stutter stop and didn’t want to walk by, but she did manage it with a little encouraging (and a treat or two). I thanked them and told them she was young and green. Since she seemed fairly okay with the first group, for the next set I decided to stay on and just see if she’d follow Jack. That didn’t work as well as I’d hoped, and she came perilously close to crashing into one of them as she bolted past (as I called apologies). So for the third and final group I dismounted again and hand-walked her past. I think some desensitizing at home with bikes will definitely be on our agenda this spring! 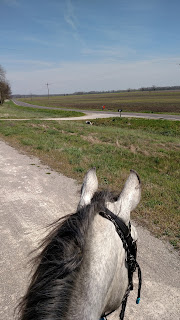 All in all, we did about 4 miles total, and I would say for 85% of that, she was a joy, so I’ll take those stats! Even when she was being less than pleasant, it was all just baby stuff that she’ll grow out of with time and more exposure. So I’ll call that first off the farm trail outing a win! I really want to take her to Indian Camp Creek so she can get exposed to water crossings (I’m sure that will be exciting) and then to Rudolf Bennit for more variety in the terrain and footing, so we’ll be out and about a lot this summer I hope!