Yay, finally things to write about and a few minutes to jot them down! Last Thursday evening I was so stir crazy after the incessant rain that I tacked Ruby up for a brief jaunt around the gravel loop at our barn – not a long ride by any means, but we at least got out and got to enjoy some warm weather and open space! She also gave a ride to a barn friend of mine, which made me think about how few people have ridden my horses. Cinna has never had anyone but me on her (which will probably continue to be the case for a bit). Ruby’s first two rides were with someone else, I had a barn friend up on her when she was just doing walk/trot, and she packed DH around once for a cool down session… but that’s really about it! It was fun to watch my friend ride her Thursday night, and see how responsive she was to someone else’s cues. 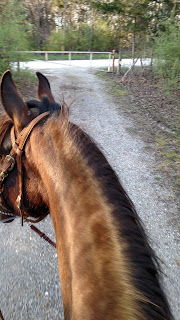 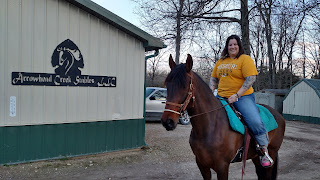 We also got the arena dragged Thursday night (even after 2 solid weeks of rain, color me impressed!), so it was ready to rock and roll over the weekend! 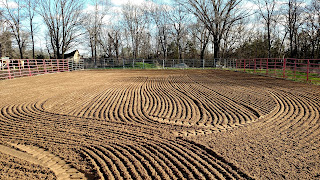 Friday, DH and I hit up a tack auction with some friends, but since I’m saving for Rolex, I resisted the impulse to purchase junk tack I didn’t need… haha. Although I did kick myself later for missing out on some inexpensive western girths, especially because I needed an extra one on Sunday! Cici came along, and was a good little auction dachshund until the kids behind us wanted to pet her – then she barked at them. Since that’s basically how I feel about kids, I didn’t really blame her. Chalk that one up to a case of dogs resembling their owners, haha. 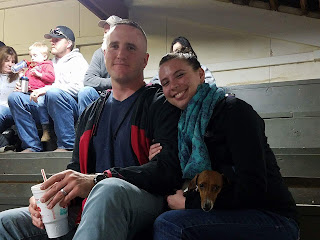 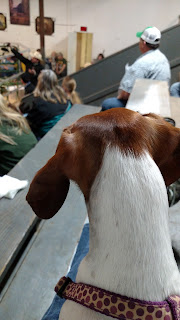 Saturday was super productive in the property management department, but less so in the riding department. We have 17 acres, and more than I like is lawn, which requires near-constant mowing. We have two riding lawnmowers, so at least we can get it done marginally faster than if we only had one, but still… that ate up a chunk of my morning. We also had some errands to run, and then I had chores at the barn in the evening (and I snuck in a short trail ride on Ruby!). After I got home I did manage to also lunge with Cinna before my mom came over to watch Downton Abbey (#addicted). As always, she was super, even with her inconsistent work schedule. 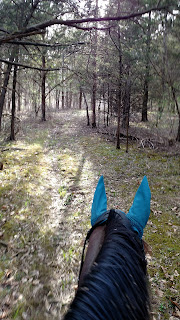 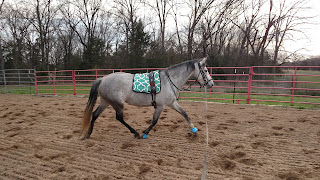 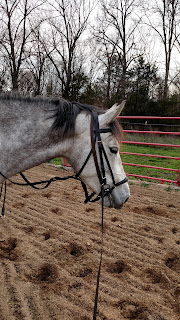 I was playing musical bridles again and I tried her in my drop with a single-jointed snaffle, and she seemed remarkably unconcerned. So I'm still unclear if her previous angry chomping is completely bit-related, or if it's baby-related -- or if it's some combination of the two. So I'll keep playing around! For now I think our go to will remain the NS baucher on Otto, which seems to be her favorite (and mine too, incidentally!) I have even more to write about for Sunday, but the entry got away from me length-wise, so look for that tomorrow! ;)
Posted by TrainwreckInTeal at 5:30 AM