Sunday’s ride was… interesting. Although Cinna didn’t seem to mind the goats being directly outside the arena fence when I lunged her on Saturday, there are plenty of things she doesn’t find scary until I’m actually sitting on her back, so I was prepared for shenanigans, just in case. I also wanted to revisit my hypothesis (from last fall, because that’s how together my life is at the moment, haha) that she found the running braid uncomfortable (leading to head-tossing/giraffeing), so I braided her before heading out to the arena. Side note: I haven’t regularly done running braids in AGES and apparently my fingers *and* brain forgot how they work, so it took me an embarrassingly long time and it was rather sloppy – although it didn’t come out while we worked, so yay for that? Next time I’ll make DH do it, he’s a much better braider.
I opted to toss her on the lunge line for a minute in either direction before I got on, and she got right to work, while the goats watched curiously from outside the fence. I did notice in the first few walk circles at the start, she did toss/flip her head repeatedly, which is not normal behavior for her on the line. After a few circles she seemed to forget about it, and carried on like normal. At the end of the ride, I probably would have said I thought the braids didn’t affect her minus the initial head tossing on the lunge, since we had a perfectly normal (for this stage of her training) and productive ride. However, the even better ride I had on Monday (that started off much worse but ended better) is making me revisit that conclusion. So this is going to be an ongoing experiment. And obviously right now it doesn’t matter since nothing we do requires braiding, but it’s still something I’m trying to think about for long-term plans. Anyway back to Sunday’s ride (Monday’s will have its own entry). 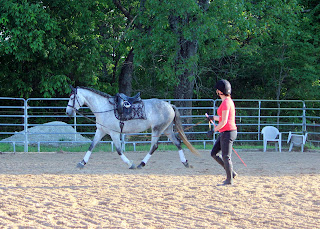 I really can’t recap the rides in too much detail because it’s so much of the basics. Walk/trot/canter/transitions/circles/diagonals/quarterlines/centerlines/changes of direction, ad nauseum. If I find them excruciatingly boring to write about, I imagine DH finds them even more boring to supervise/photograph, so you know who da real MVP is in this scenario. 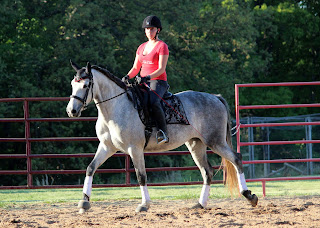 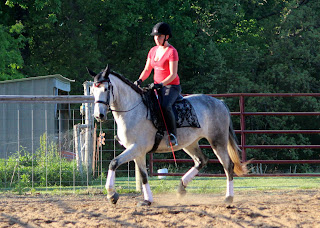 Cinna was definitely hyperaware of the goats and what they were doing at all times, but still doing her best to listen to and acquiesce to my requests. Things were going fine until about halfway through the ride, when the goats decided to play king of the hill on the pile of lime behind the arena. I was too focused on her to watch what was going on, but I could feel the change in her body and then I heard DH laughing, so I knew something was up. 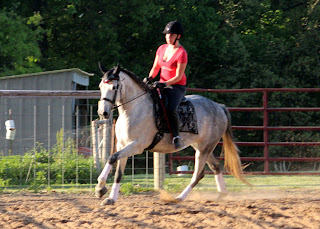 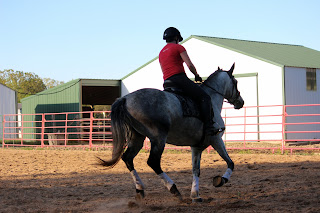 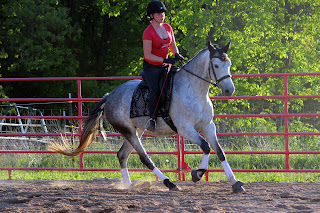 When I asked her to trot by that section of the arena, the goats got particularly vigorous in their tussle, and she bolted away. We regrouped and I was able to get her to trot calmly by them on the next pass, and then I opted to just shorten my working space in the arena and leave the last 20 feet (by the goats and their rock pile) alone. There’s a time and a place to escalate into a confrontation about working in every portion of the arena regardless of what’s going on outside of it, but I didn’t feel that Sunday was that time or place. 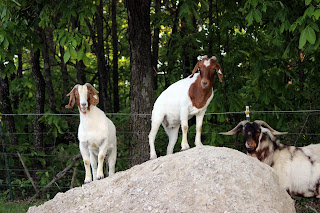 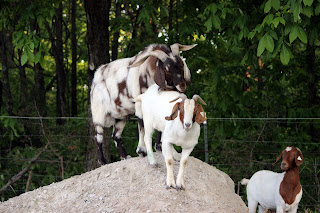 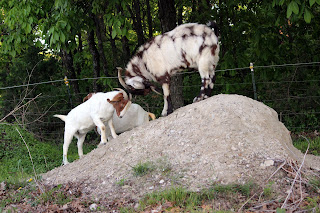 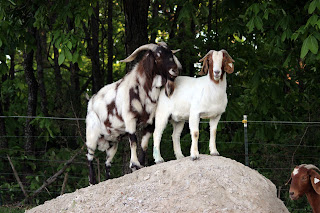 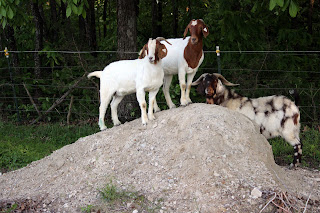 The rest of the ride was uneventful, so we called it quits on a good note, and I turned her back out to graze. Basically at this point what she needs is a whole lotta wet saddle pads and work on the basics, which is supremely boring, but hopefully DH's photos will break up the snooze-fest and you can enjoy my pretty Spanish mare! 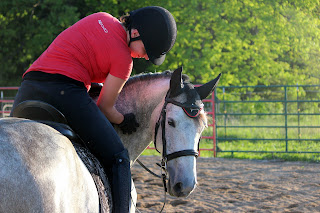 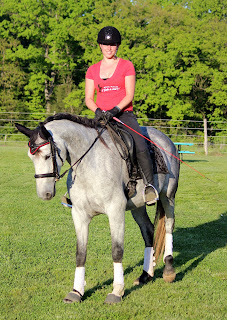