I've had my Rolex purchases post written for 2 days but haven't found the time to sort through photos and actually get it scheduled, so that's my biggest fail Friday!
My other fail was yesterday -- one of the goats (Blanca, or as DH calls her, white-face) has been battling some hoof rot exacerbated by the 6+ inches of rain Missouri got last week. While I was in Kentucky, DH called me to say he put her in the stall next to Cinna (I was not amused) so her hooves could dry out and stay dry. She's not particularly wild about this, and spends most of her time with her little nose and hooves stuck out the stall bars. 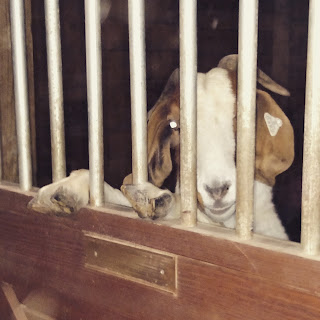 So yesterday it had finally stoped raining and was beautiful out. Blanca couldn't go back outside to her pen because it was muddy, but I figured I could stake her out in front of the barn to graze while I cleaned stalls. So I wrestled a dog collar onto her (yeah that went about as well as you're imagining) and tried to take her outside.
Note to self -- the goats are not broke to lead and do not appreciate being dragged outside. She ran around like a lunatic for a minute (goat lunging anyone?), and then dragged me back to her stall. Okay then. Guess she'll stay in there until it's drier! 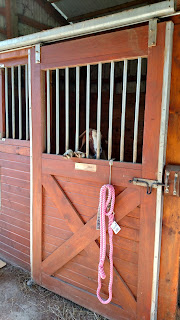 Posted by TrainwreckInTeal at 6:11 AM