Well I thought the week would be a total loss in terms of riding and working horses, but I've been surprisingly productive! Monday I dragged my happy ass out of bed early and dashed over to the barn to ride Ruby. She seemed less than thrilled about being pulled in from night turnout and saddled at 6 am, but perked up when we hit the trail. We enjoyed a leisurely trail ride through a dewy, misty morning (although lest it sound too idyllic and lovely, I took approximately 2348245 spiderwebs to the face). We trotted and cantered in some of our favorite places, and Ruby felt great. She could have kept going for hours -- I on the other hand, had to get back and go to work. 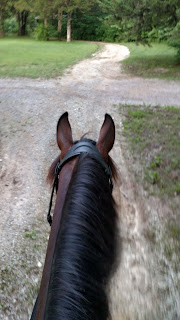 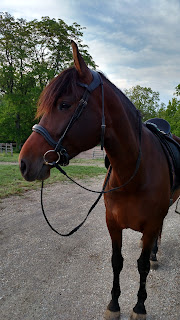 I was on a roll Monday, so after work I came home and lunged Cinna. DH was blading the driveway, and I'm super bad at photos/videos while lunging, so tragically no media. I worked her in the Lauffer reins and she was very good. She's getting so much more solid at maintaining a steady tempo. And her first upward transition when I asked her to trot, she went right from walking into the most beautiful lofty canter. Obviously that's not the gait I asked for, so we went back to the walk and tried again, but it's so exciting to see her start to figure out how to use all the pieces of her body, and start getting strong enough to do transitions like that on the lunge. She's a long way off from being able to manage them with a sack of potatoes (me) sitting on her, but it's a start!

Tuesday was rainy so I let myself be lazy (I try to pick at least one day of the week I can "sleep in" because it helps me keep rolling out of bed early the other 4 days). We did manage our light experiment that evening, but you've already seen that, so no need to recap it again, haha. Wednesday evening I ran out to the barn to free lunge Ruby. She was WILD. Like normally when I say Ruby was wild, I'm being kind of tongue-in-cheek, because her default mode is typically perfect. So normally "wild" for her is the occasional selective deafness when she doesn't want to stop cantering or something. Not so much Wednesday -- I really wish I could have video'd in the arena, but we were there at that awkward evening time where the light hits the arena just right so part of it is daylight bright and part is totally shadowed, and historically my phone can't even with that. But she was full on leaping through the air, kicking, flagging her tail, snorting (I seriously had to double check I hadn't grabbed the BO's half-Arab from turnout by mistake), doing sliding stops and rollbacks, and giving me tantalizing glimpses of the most insane floaty trot. She was a hot mess, and I basically spent the entire time giggling in the center of the arena as she cavorted around me. Whatever it was, she got it out of her system, and then meekly followed me around at the walk to cool out. She's such a goober -- I know my current schedule shortchanges her pretty badly because on the rare occasions I can make it to the barn, I'm always rushing, but even with my limited attention, she's still a rock star.
Thursday the weather was beautiful, so I left Cinna in after breakfast and turned the boys out. She's particularly herdbound, so this led to a lot of screaming back and forth while she tried to climb out of her stall. I ignored her, and got all my tack ready to work her. After she calmed down, I brought her out to work. I hope that doing this repeatedly over the summer will help resolve some of the herdbound issues, because she can't melt down every time I leave her in a stall alone in the barn. She's fine being left alone stalled at other places, but she needs to be fine when I do it at home too. 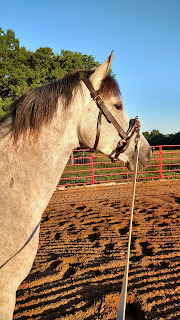 We mostly worked on walk-whoa, because the last few works she made it clear that she thought whoa was an optional request, and obviously it's not. Once we had a firmer grasp on that, I also worked on some trotting in hand while I run like a lunatic trying to keep up with her (like she will need for halter classes this summer, if I manage to get her out), and I also introduced the concept of changing directions on the line at my command. She seemed to pick it up pretty quickly, so we'll see if she retains it the next time I ask!
Thursday was National Wine Day, and since the weather was still beautiful when I got home from work, I dragged DH away from his paper on art history and we threw bridles on the geldings for a quick bareback trail ride. He spent the first 10 minutes complaining about how hard it was to balance without a saddle (as he sat on the horse whose back is like a SOFA, while I tried not to have the shark fin withers of my geriatric TB break my pelvis). I think maybe now DH has a greater appreciation for me being able to canter Ruby bareback and bridleless, haha ;) We looped the trail twice, and then rode out in the back pasture to check the pond. The 10 questions post earlier this week and it's question about swimming made me wonder if Jack would still go in water, so I handed off my phone (just in case) and sent him down the to edge. While I wouldn't make him go all the way in (the bottom of that pond is like glue), Jack happily splashed into the shallows and immediately dropped his face to do his patented dolphin water snort where he blows water everywhere. Clearly I need to take him somewhere with better footing for actual swimming this summer, he misses it!

This morning I had more plans for more productive work with Cinna, but Mother Nature had other ideas -- the only hour of the day I have at home to work horses was also the hour with an 85% chance of storms, thunder and lightning -- the rest of the day should be gorgeous. Ugh. So I am sitting inside writing this instead (listening to the soothing sound of rain on the roof), so at least the morning wasn't a total loss? My aunt and uncle fly in today, so I'll spend the next 5 days with them -- however my aunt is a horse person so I know riding will be on the agenda at some point! Maybe we'll make a trip back out to Indian Camp Creek or Rudolf Bennit!
Posted by TrainwreckInTeal at 6:00 AM