This past Monday was a state holiday courtesy of Missouri’s favorite hometown pres, Mr. Harry S Truman. No complaints from me, I will always take an extra day off. I planned a leisurely day of sleeping in and then working both horses. As is so frequently the case, DH had other ideas. He hustled me out of bed first thing in the morning to work on the goat fence. We used up the supplies we had, then made a run to town to get more (and also drop off the truck tire for either repair or replacement). After a grocery and lunch run, we headed home to finish up the fence, then back to town to drop the whole truck off (tire ended up being not fixable, so we replaced it and decided to replace the other rear tire at the same time, goodbye $$$). After we got back and put the finishing touches on the fence, DH sighed and said “Phew! Now we can relax for the rest of the day!” Uhhhh no, I still need to ride my horses, thanks.

He opted to stay home and catch up on some schoolwork, while I headed out to the barn to see Ruby. I was hot and tired and kind of grumpy by this point, and not really in the mood to school in the arena, so I decided a nice cool trail ride would suit my attitude better. Ruby was out in the grazing paddock enjoying the grass, and she apparently didn’t like my idea much – the horse who is never hard to catch decided to rile up her turnout buddy and they did laps around me for a while. Once she had that out of her system and resigned herself for being caught, I tossed her tack on and headed out for a trail ride. 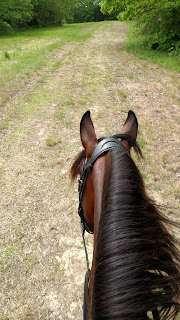 We dragged BM and one of the other horses at the barn along with, and had a really nice time. We did both loops of the main trail at a more or less sedate walk (Ruby being slightly more amenable than she was over the weekend to the walking). We did discover that the last round of storms deposited another tree at the creek crossing, so a slight detour was in order. After the ride, I hosed Ruby off and was hand grazing her in the shade under the tree. I was in the process of instagramming a cute pic I took of her grazing, when suddenly I felt a weird pressure on the lead – I looked up and she had dropped to the ground and was rolling! I was a little too slow to get pics of her completely on her back, but then she dropped back to the side, rubbed her face on the ground like a dog, and slowly clambered back to her feet. 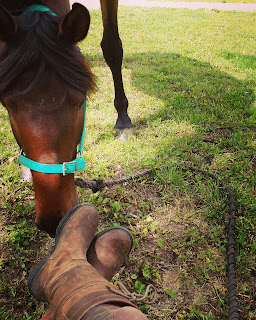 While basically all of my horses will roll in turnout after a bath (or in their stall, or wherever), that’s the first time I’ve ever had one roll in hand before! It caught me off guard for a second, then made me laugh. She was clearly enjoying herself very much! Thankfully that put me in a better mood, because I had to zip back home and then to town to pick up the truck before I could ride Cinna. And at least getting to cruise home on two-lane blacktop with the windows down and radio up feeling the turbo kick helped ease the pain of dropping several hundred dollars on tires. 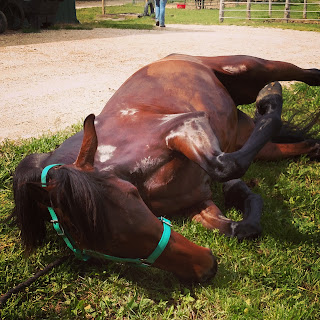 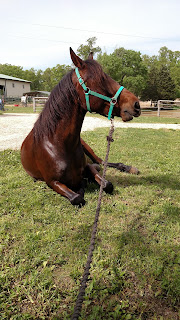 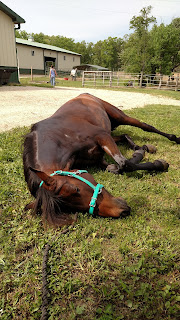 By the time I returned home from my THIRD trip to town in a single day, I was getting tired. Too tired to change or get matchy matchy with Cinna, so I just pulled her out and started tacking her up. From the second I snapped her into the cross ties, she was LIT. Dancing back and forth, calling to the boys, being a PITA to bridle, even leaving me several piles of manure to clean up later (which is fairly out of character for her).

Between my state of exhaustion and her attitude, I decided to skip braiding (also since I skipped matching things I figured the pictures would never make it onto the internet – I use the photos for training/evaluation purposes and 95% of them never see the light of day haha). I figured on her third straight day of work, we could forgo the lunging and I could climb right on – so I did. And then spent about 10 minutes regretting my life choices, as she decided she was disinclined to acquiesce to ANY of my requests, and spent the time giraffing, jigging, and generally making herself unpleasant. She didn’t seem to notice the goats (who were actively rubbing ON the arena fence while I rode by), but she was like a sugar-high toddler on the verge of a meltdown.

Although I don’t want her to think she can set the pace of every ride, for whatever reason, on Monday she just had so much energy it was bubbling out everywhere, and continuing to force the issue felt like a sure way to induce an explosion – and while I’ve sat through a few of her shenanigans, I know that if she ever really truly puts her mind to it, I would be eating sand. So to me, it’s smarter to avoid the confrontations by giving her a reasonable outlet – so after a few laps at her best attempt at a walk, I let her trot a lap, and when she still felt edgy, we went ahead and cantered. The first lap or two felt like Mach 10, but then she calmed down and gave me some super nice canter, and then when I asked for the trot, we had what felt like an effortless transition. The ride got better from there, as she continued to channel her energy into working, but let me influence the tempo and speed at each gait.

When she would get strong at the trot, a small half halt and changing the rhythm of my post was all it took to bring her back. Her canter felt infinitely more adjustable than it had been the day before, or even most of her previous rides. We rode test pieces from all 3 intro tests, and even picking up a canter at A (where the goats had resumed their king of the hill shenanigans) wasn’t a problem – I was prepared for it to turn into a “bolt away from the scary goats” but she didn’t even bat an eyelash. 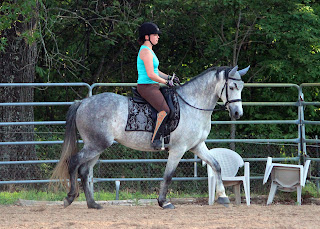 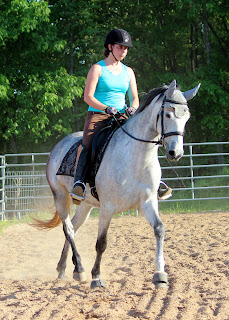 While our circles were not always as round as they should have been, in every other respect, she was great. Even when the billy goat stood on his hind legs on the rock pile (to reach a tree branch wayyyy above his head), she just waited for my reassurance and carried on. I think if I had thrown her on the lunge line for a minute first she might have been able to burn through some of that excess energy and we could have started the ride well. But at some point, I want to be able to reliably get on her without lunging her first, so it was good practice for me to work through it with her and let her know that I understood the energy and help her channel it towards something productive instead of fighting. 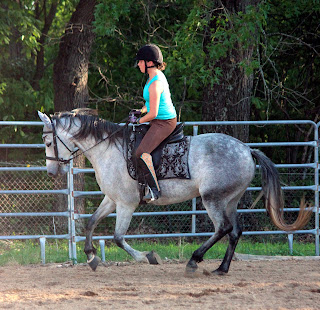 I also think having her mane loose instead of braided had something to do with the relaxation we were able to achieve WAY faster than on Sunday. DH took approximately the same amount of photos and we rode for about the same amount of time both days, and while I only had a handful I liked on Sunday, on Monday it seemed like it was every other photo. Obviously I know we still have SO FAR to go, but it was so encouraging to flip through the photos and like so many of them when the ride started as such a shit show -- we really made some lemonade from a ride that started out like straight lemons! 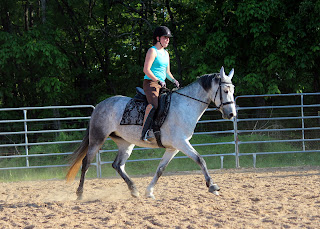 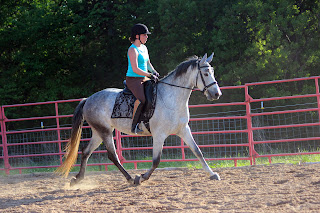 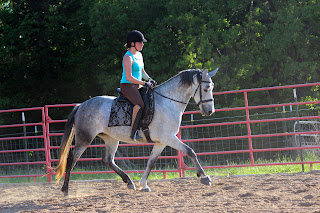 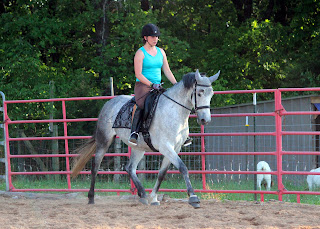 We called it quits after some really good work -- she's really coming along and I prefer at this point to keep our rides pretty short, because she does still have a very baby attention span. I don't believe in exhausting drilling when they're young, just putting in as many short (hopefully good) sessions as I can -- seems to be working with her so far! She got pretty sweaty between the heat/humidity and the extra cantering we started with, so I gave her a lengthy hosedown. She still hasn't had a real bath, but with rain in the forecast, I figured I was wasting my time. Now I need to find some small fun shows with rail classes (or intro dressage tests) to get her some more life experience! 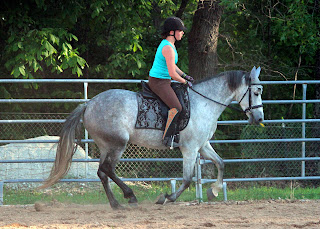 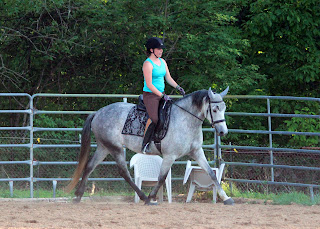 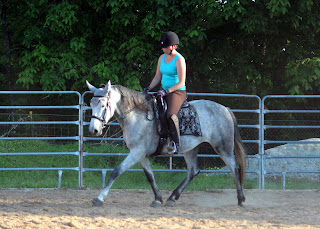