#sorrynotsorry but I have so much to say about my Rolex trip it's gonna have to be split into multiple posts. Karen already hit some of the best parts, but here is my breakdown of Wednesday and Thursday of last week.


Wednesday
My RK3DE adventure started Wednesday, as I worked a half day then made the 5.5 hour trek to Louisville, KY. My trip got off to an extremely rocky start when I was informed about the tragic and unexpected death of my aunt as I drove home from work (her funeral services are tonight actually) – my first few hours on the road were spent in a numb haze, as I navigated through storm after storm (including a particularly nasty hailstorm in Illinois that brought traffic to a standstill on the highway). By the time I hit blue skies and sun in Indiana, I was able to more or less pull myself together so I could focus on the trip – staying home being sad wouldn’t have brought my aunt back, and as she was always the life of the party, I figured she would prefer if I carried on as planned and had some drinks in her honor.
I rolled into Kentucky around 7 on the dot and met up with Karen and Aimee, who were incredibly understanding about my slightly off-kilter mood. Karen took us to a fantastic bar overlooking a river (where people could dock their boats and come in for a meal!) and we had amazing food and drinks. After dinner, we headed to the Liquor Barn for supplies (obviously the most important kind) and then to a grocery store for snacks. After mapping out our schedule and game plan, we all crashed to try to get some sleep.


Thursday
Thursday we were up bright and early and headed out – our first stop was Karen’s super amazing barn. There is something about the miles and miles of black fences and Kentucky bluegrass that just makes my heart pitter patter. I had my nose glued to the window for most of the drive. We got to say a brief hello to Hampton, Karen’s gorgeous “Indiana Warmblood” (that moniker makes me giggle every time), and I made mental notes about some of the really neat features I loved about the barn design – in particular, there were some neat shedrow-style stalls that had dutch doors and then the rest of the wall folded in half – so during the winter, you could close it to protect them from the elements, but in nice weather you could drop it so the stalls became super airy! Very cool! We pitched in to help Karen zip through chores (cleaning stalls and filling water buckets are universal no matter where you go!).
After the barn, we hit the road for Lexington. It was a bit of haul to drive back and forth every night, but I was SO appreciative of Karen opening her lovely home to me and Aimee and letting us take over her couch, guest bathroom, and also her cat Buckley (who chose to hang out with us most nights instead of sleeping with her, haha).
Thursday was our designated shopping day (although I ended up shopping EVERY day, oops?). Our first stop was the official Rolex tent like 20 feet inside the gate – I knew my wallet was going to be in trouble when I couldn’t resist starting my purchases there. I think purchases are going to have to be a whole separate post, but I will sheepishly admit that I literally bought so many things that at one point over the weekend (in the Annie’s booth no less), my credit card company texted me that they thought I was the victim of credit card fraud. Errrr, thanks for the vigilance Chase, but nah, I was just stress shopping like a maniac. 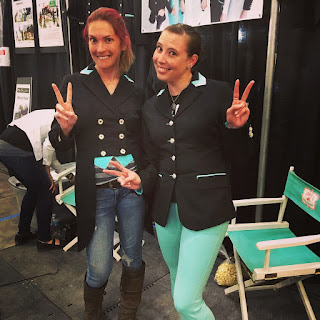 On the plus side, between what I saved up pre-Rolex and selling quite a few photos from my GMO show a few weeks ago, I actually ended up about breaking even – which is great, because otherwise I probably would have ended up in the doghouse with my DH

After hitting up most of the vendor booths and buying SO MANY THINGS, we trekked back to the parking lot to deposit our loot. We were conveniently parked near the campground, which made it easy to pop back over for the taco party hosted by Amy! The tacos were delicious, the drinks were strong, the bloggers were out in full force, and lots of fun was had by all! It was really cool to be able to put so many faces to names, while simultaneously feeling like I was hanging out with friends I’ve known for ages. After a few hours of fun, we hit the highway for the drive back to Louisville to crash for a few hours. 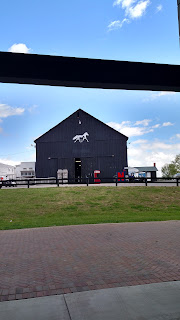 You'll have to tune in later this week to hear about the rest of my trip! ;)
Posted by TrainwreckInTeal at 5:00 AM