Let’s be real – I only have a nominal interest in eventing. I went to Rolex to hang out with bloggers, and to buy things. I was wildly successful at both of those goals, making insanely amazing memories and bringing home quite a bit of swag. I actually did really enjoy the dressage and cross country I got to watch, and sometime in the future, I'd really love to stay for the whole weekend and see stadium too! Fair warning, this post is long!

Thursday was supposed to be our designated shopping day. Of course, that didn’t stop me from shopping all three days I was there, but whatever. I’ll try to break down purchases by days, because I did take “swag pics” at the end of every day to try to help me remember things (this was also helpful when I was tallying up charges on my credit card going “where did I spent $13.73??”). So without further ado – the purchases….


Thursday
I made it 20 feet into the grounds before I hit the official Rolex merch tent. I bought a lanyard, which was actually a lifesaver in terms of keeping my tickets for the weekend organized, plus I like to keep lanyards from events (still have my AWC 2016 one hanging in my office!). I dithered over the hats for a while – some of the colors I liked had meh styles on the front, and then some of the styles I liked came in meh colors. I finally settled on this really neat brown one.
I sent a bunch of photos of custom leather halters to friends, but did not succumb and purchase any (although the black with sparkly teal padding was definitely tempting). I did hit up the Perri’s booth multiple times because I really love their padded halters but was hoping for more of a deal (2 halters for $140 just wasn’t that appealing -- what can I say, I’m cheap!). They had a teal padded one in their clearance bin for $50 with some neat brass button things, but I managed to resist both Thursday and Friday, and by Saturday it was gone. Yay self-control!
Aimee did some shopping in their booth Thursday, and literally as she was checking out, I threw a blingy whip onto her pile and gave her money for it. A girl can never have too many sparkly whips. Or whips in general it seems, because later that day we came across the Horze gel handled whips (that I’ve been eyeballing in my local tack store) at a price I couldn’t resist. I then spent the rest of the day whacking people with the whips as I tried to carry them around, so totally worth it.
While Aimee was stalking Eponia, I was doing my best to avoid it, after the nice man there made me try on some beautiful blue breeches that I LOOOOOVED but that also cost $150…. Pass. So every time she went there, I ducked into the Gersemi booth next door, and eventually did convince myself to buy a fun light grey show shirt, since I don’t really have a good show shirt -- clearance bins FTW!
The Horseloverz booth sounded promising, but really the racks were pretty heavily picked over by the time we ended up there, so mostly weird sizes or colors. I did grab a Noble Outfitters base layer shirt for $6, because I can never have too many of those! I was intrigued by the Buckwild breeches at their booth, but even after trying on some really fun ones, I just couldn’t pull the trigger at $100. However, the “Bitch please… I ride a mare” shirt was entirely too perfect, so one of those ended up in my shopping bag. 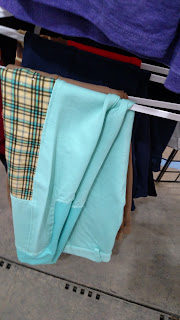 The next booth that got me was Mango Bay – I love the belt I currently have from them, but it’s too wide for the belt loops of most of my breeches. I snagged two of their clearance belts that were narrower, and also another shirt that I thought was a bit too perfect for me. (I also stole that Topline Leather hat from Aimee because it’s teal and I wanted it and that’s what friends are for, right?). 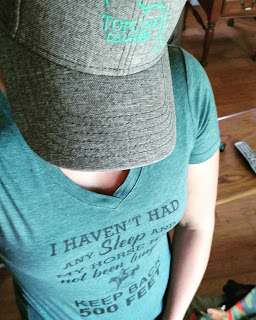 The only other Thursday purchase was an impulse purchase that probably won’t get any use until next fall, but #noregrets – it’s a gorgeous HKM quartersheet in varying shades of… why yes, you guessed it, teal and blue. That does mean that now I have too many quarter sheets and need to downsize, so if you’re in the market, holla! 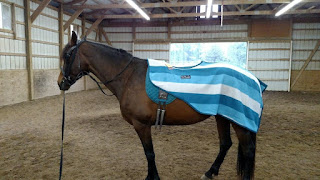 I did spend a SIGNIFICANT amount of time in the Annie’s booth dithering over breeches. I’ve been dying for a pair of the Annie’s blue breeches since I first saw them like 2 years ago, and have put them on multiple Christmas lists. I did get to try them on and figure out sizing, and she was running a buy 2 get 1 free sale…. But did I really need 3 new pairs of breeches? Nope. So I sadly walked away. But only after trying on one of their awesome coats, because I’ve been lusting after one of those forever too. At least I got photographed wearing everything?
Aside from the purchases, I got a ton of fun freebies, including but not limited to: a Land Rover stamped horseshoe and cookie, several different kind of dog joint supplements (which Cruce has been testing in lieu of his current cosequin supplement), a fun teal t-shirt, some sort of ointment for scratches, a horse shaped stress ball, and some chapsticks (mmmmm chapstick junkie here – the Triple Crown one is excellent!).


Friday
I was hoping to keep the shopping to a minimum Friday, but I did need to make it back to a boot sock vendor (Inkstables), because Thursday they promised me they would have dachshund socks arriving Friday, so naturally I had to go check. The dachshund socks had indeed arrived, so I grabbed a pair of those, a pair of their Rolex socks, and a 3rd pair with horseshoe socks for my mom (not all of my shopping was for me!).
We heard about the Stubben bit sale, so spent a bit of time in there. I did grab some bits (both for a friend, and one just for decoration because it was cheap AF), but it was my other wandering that got me in trouble. I picked up the most perfect braided leather grab strap ever that looks like it was MADE to go with Otto, and a pair of Lauffer reins (because I didn’t have any and I wanted some, that’s why). They also had really insanely comfy t-shirts on sale, but none my size. So I got one for DH. I thought I was done there, but then Teresa sent me back to get the other pair of Lauffer reins they had for sale for her --#tackhoproblems – see? I told you guys not everything I bought was for me!
We hit up the Plaid Horse booth to hang out with Betsy and grab some sweatshirts (legit THE MOST COMFY THING AND I NEED MORE), and I also grabbed a few more pairs of boot socks for both me and my mom (you can never have too many boot socks!). 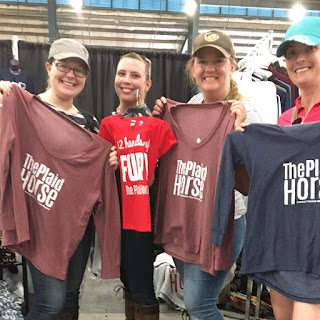 And here’s where I for real fell off the wagon – everyone had seen the photo of me in the Annie’s gear and was like “YAS GIRL DO IT” and I was like “but that’s a lot of money and I don’t really even show that much, am I going to wear that coat on my intro horse? That’s dumb” and they were like “do it anyway!”….. What can I say? It was a really fun sparkly coat. And I REALLY wanted the breeches. So the nice Annie’s lady and I sorted out a Rolex deal for the coat and the two pairs of breeches I wanted. This is the point at which my credit card was like uhhhh no girl, don’t, and messaged me concerned about fraud. After I confirmed I did in fact want to place an order there, everything was sunshine and roses, haha. 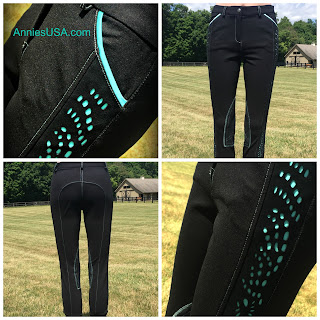 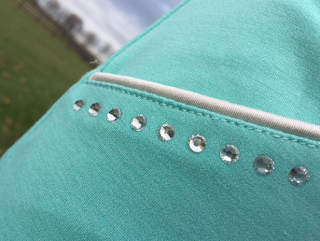 I was pretty sure I was done for the day until someone dragged me into the Mickler’s tent and there was a teal Ariat down vest marked way way way down and more life choices were made. I do love me some vests!
Freebies from Friday included my new favorite hat (besides the Topline), from Bliss of London – it’s teal, duh. Also lots of horse cookies, no pics of those though because that's boring.
So on Saturday, I tried to behave, I really did. I was really, really, really good for a while, but while we were dragging Jen around making her try on children’s purple breeches, Karen found some great quality bits being clearanced out. So a few of those came home with me. And then on our last swing through Perri’s clearance bins (looking for a fun halter for Jen), I found Aimee a grooming halter and then of course couldn’t resist grabbing one for myself at that price.
But then that was all she wrote. No more purchases. Promise. It helped that we spent most of the day wandering around the cross country course, far from the vendors.... lol. My only other freebies were some more hats and electrolytes, and several shots of Woodford Reserve (from test tubes, no less) – thanks Kentucky Equine Research! I left Teresa’s reins with Aimee to be shipped with another box of tack, I gave my mom her socks and hat and t-shirt, and DH has his hat and Stubben t-shirt…. So honestly, came home with less stuff than I thought!
I really enjoyed having the option to touch and try on so many brands at Rolex. Our local tack store is AWESOME but there were a ton of boutique brands at Rolex that I can normally only purchase online, and it’s much more reassuring to buy things once I know they’re going to fit/be good quality/whatever. So there you have it -- I think that should be the last of my Rolex recaps, so now we can get back to what's going on currently! (not much actually lol)
Posted by TrainwreckInTeal at 5:00 AM