The heat finally broke a little yesterday -- we had a pop up shower shortly before I left work (in fact when I walked out to my car it was raining while the sun was shining brightly. WTF Missouri?), but no rain at the house. I was still kind of recovering from a less-than-stellar week at work, so I opted to buckle down and get the majority of the chores done in the evening to free up my morning to work Cinna. In the middle of the night, I woke up to the sound of rain tapping on the tin roof. I briefly cursed myself for not working Cinna in the evening, but figured if it was only a light shower, the arena would probably still be okay. 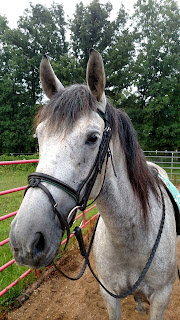 I ended up waking up well before my alarm, so I figured I might as well get the day started. When I walked outside, all three horses were sacked out in the field napping. I crawled through the fence and went to join them for a bit. Jack and Cinna both let me sit on them for snuggles. 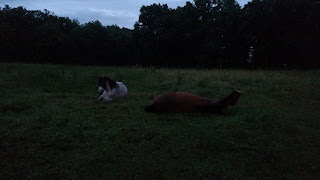 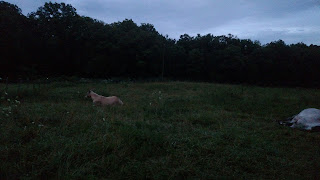 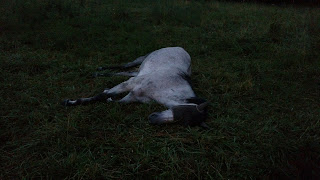 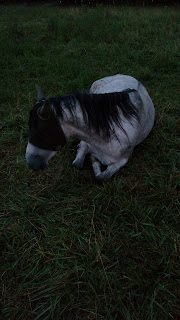 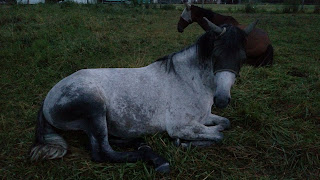 After getting all the other animals taken care of and the boys brought in for breakfast, I headed out to the arena with Cinna. She was a champ -- I kind of thought there might be histrionics about having to walk away from breakfast to come work, but she was unconcerned. She hasn't been worked much lately, so I let her get some ya-yas out on the lunge before I asked her to buckle down and focus. 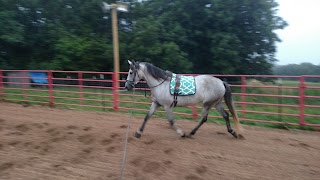 She really brought her A game this morning. I was a lot more lax about consistency when I taught Cinna to lunge initially (as opposed to Ruby or Topaz) and sometimes she cuts her circles and dodges in -- today I insisted she stay all the way out on the end of the line, and once she worked through that concept and figured out what I wanted, she rocked it. I think some of it is a confidence thing -- both Topaz and Ruby were much more confident in themselves and didn't need much reassurance, but Cinna needs a lot more "hand-holding" so to speak. Any time she's nervous about something, her default is to look to me for safety, and on the lunge line, sometimes that meant coming closer to me.
I didn't ask for much canter, because she's not fit, but we did quite a bit of trotting. I also focused on using the whole arena, walking up and down the center so she was constantly making circles in different areas. We also did a little bit of work on me running next to her while she trots -- quite often, she interprets that as a signal to take off cantering at top speed, but today she was more attentive and less panicked, and we made a few runs up and down the long sides. 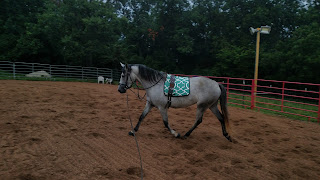 Even though it was cooler this morning, it was still quite humid and she worked up a bit of a sweat. I decided to make poor life choices and climb on her bareback to finish walking her out (poor life choices because there was no one home but me and if something happened, no one would find me for hours and hours). When I first climbed on, her head shot up like a giraffe and she started chomping on the bit. After a minute though, she settled back in and we just casually wandered around the arena. I've been ruminating on Megan's post about eliminating static, and I decided to really focus on my body and stopping myself from giving Cinna any unwanted aids. At one point I was focusing so hard on not doing anything that I unintentionally tensed up and stopped breathing, and Cinna immediately halted and was like "WTF are you doing up there?" I laughed, remembered to breathe, and she set off again. 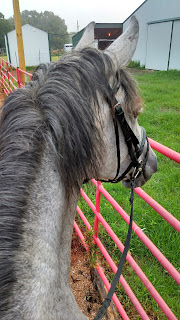 It was a really interesting exercise for me mentally, although clearly I'm not even a tenth of the rider Megan is. But it made me realize how many aids I give inadvertently because I lack the necessary body control to ride quietly. Always something to work on, right?
At any rate, it was a very productive morning, and after she cooled out, Cinna got to enjoy some clover before I put her up for the day. I tossed some tack in my car and am hoping to ride Ruby after work, so fingers crossed the weather and my schedule is more cooperative! This morning was just the quietness I needed to relax after a hectic week.

Email ThisBlogThis!Share to TwitterShare to FacebookShare to Pinterest
Labels: Cinna