2017 HHP was officially even more fun than last year, which is something I didn't think would be possible! When my alarm went off Sunday morning (actually my second of three alarms, since I slept through the first one), I was a bit grumpy. DH had dragged me out to a charity event the night before and I was running on about 4 hours of sleep. Plus it was STUPID COLD outside, ugh. But I dragged myself outside, got the horses fed, and waited for my PIC Hanna to arrive. She was right on time as the sun rose, we transferred her tack and her mare Lily to my trailer, stopped and grabbed Ruby (the convenience of having my horse a mile down the road cannot be overstated, lol) and off we went!
We didn't put much effort into costumes this year (similar to last year actually haha) and just both dressed in our "signature colors" -- teal for me, and purple for her. We did come up with an answer to the "what are you dressed as?" question though -- we were human crayons! Lame, I know. 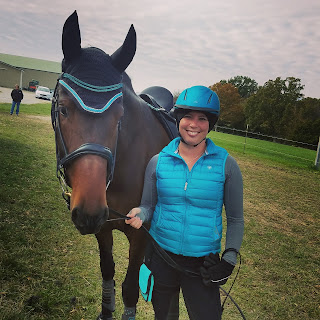 We got tacked up and headed over a few minutes before our start time, to warm up in the outdoor, where there were a handful of jumps. Whereas last year I remember commenting on how relaxed and chill Ruby was, this year she was LIT. I don't know if it's because we haven't trailered to a single event all year, only trail rides, or whether she was just reacting to the temperature changes and excitement in the air, but she was a FIRECRACKER.... haha. I let her burn some energy at the canter, and then decided to let her pop over the crossrail in the arena to see what she would do. When I turned her up centerline and trotted her at it, she locked onto it with laser focus and launched over it, eliciting giggles from some of the bystanders. I opted to skip the verticals with fill (#imaweenie) and we just cruised a bit until it was time to head out on the trail.

This year I did remember to start my trail tracking app, but of course I accidentally powered off my phone halfway through, and lost it. I restarted it for the second half, but didn't bother to save a copy. The footing on the trails was fabulous, and as always, the decorations were on point. We took almost every single jump option on the trail (we were in the Hilltopper division, so the jumps were optional), and Ruby was raring to go. She even decided a few log piles on the side of the trails were jumps, and occasionally tried to veer off the beaten path to jump them. 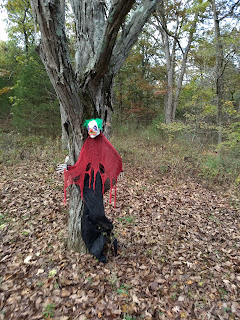 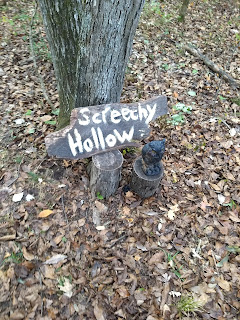 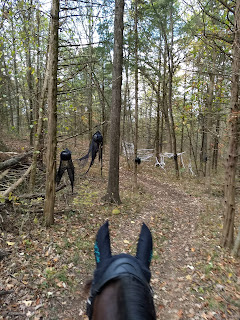 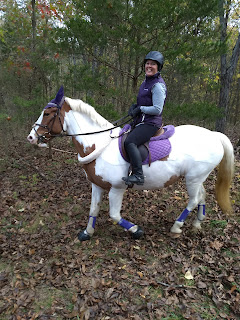 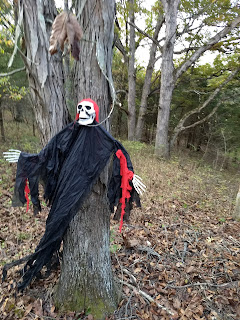 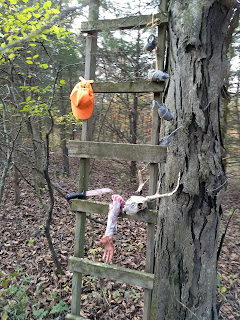 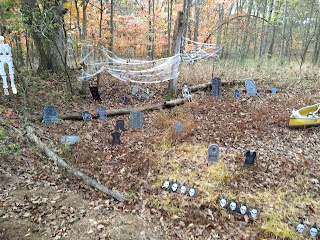 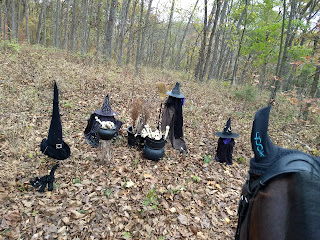 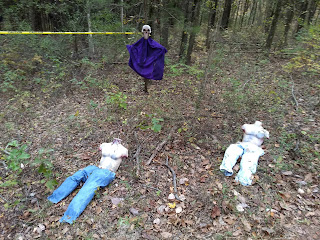 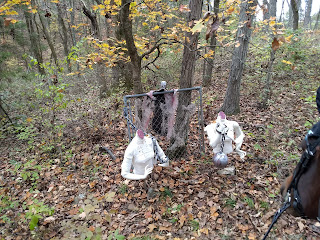 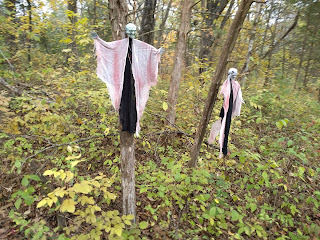 By far the best part was the 10 minutes in the cross country field -- I planned to take it easy, and start with a simple bridge crossing. Since my horse has crossed about 18 bagillion bridges out on the trails, I assumed this would be an easy, low-key start. But for whatever reason, this was clearly a horse-eating bridge, and she shot off the side of it (taking out the family of garden gnomes who guard it), necessitating a dismount to put them back... haha.
After that I aimed her at a few of the smaller (aka less terrifying for me) jumps -- she absolutely ate it up, and thankfully the photographers hanging around got some fun shots! Actually coming off one of the smaller jumps she locked onto a MUCH BIGGER jump and the bystanders again got a good laugh out of me frantically trying to redirect her off into the grass instead. I think she was a bit sad to leave and head back into the woods, but we still got some more fun logs to hop over there, so she was content.
I also love the big laps through the hay field at the end -- Hanna and I started at an easy trot, let the horses drift up into a nice canter, and then laughingly pushed them up into an all-out gallop for a short spurt (her mare is half draft, mine is Spanish, so no speed demons here lol). They had an absolute blast, and so did we! We brought them back down to a walk well before the end of our second lap, and had a leisurely stroll through the finish line back to the trailer. We ended up completing in about 1:18 and change, and the optimum time ended up being 1:19 and change, so we came in 2nd place! (thus earning literally the only piece of satin I have acquired all year).
We hung out and had lunch, enjoyed socializing, and cheered for everyone who won a prize (like last year, there were prizes for best costume, fastest time, slowest time, oldest pair, youngest pair, etc). The venue is one of my favorite and Lora and crew always put on EXCELLENT events, and this was no different! I love this kind of low-key, relaxed outing. Maybe next year I'll be brave enough to take Cinna? Although Ruby might be depressed if I take away the one chance a year she gets to jump things, haha.
And for your viewing pleasure -- Hanna was kind enough to video us out on the trail popping over a jump... haha. I wish we had more hunter paces to go to, I'm in love!