Brrrrr. Idk about where ya'll are, but it's COLD here. Which frustrates me, because I'm off work today and was really hoping today would be full of BARN TIME! Instead, it's full of dachshund snuggling Netflix time. Which is fulfilling in it's own way, just not what I wanted. Although apparently later it's supposed to hit a whopping 40 degrees, so I should be able to venture out then?
I haven't been around much this week for a variety of reasons. DH's work schedule is a hot mess again, so he only had last Sunday off -- which meant we had to fit in a LOT of chores in a single day. A day that got dark at like 5 pm because FUCK DST UGH. Including vaccinating the goats and trimming their feet. Of course, about 2 hours before we planned to do that, Sam decided to try to cut his leg off. Because apparently he is obsessed with basically trying to kill himself any way he can? You know what's less fun than doctoring wiggling horses? Doctoring a wiggling goat. But I did manage to get the bleeding stopped, and the wound is actually healing shockingly well -- although all the trust I built back up with him after the deworming saga is gone again. He wants nothing to do with me cause every time I touch him, I make something hurt. Life on a farm is never dull! 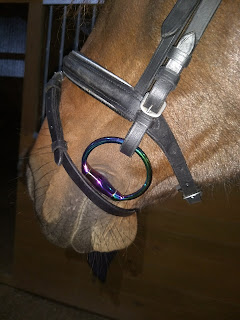 This week I've been picking up some extra chore shifts at the barn because the barn manager took several clients to a big stock horse show (where it sounds like they're bringing home their share of ribbons, YAY!). Of course, now that it's dark so early, I basically have time to get to the barn, bring horses in, and then drive home in the pitch dark. Wah. Last night I did manage to squeeze in a 20 minute bareback W/T/C ride on Ruby, and she was super good. Until we tried to walk across the trail bridge she's crossed 1232494351 times and then her brain leaked out her ears and EVERYTHING WAS SCARY. So we schooled the bridge in hand for a while and ate copious amounts of cookies until she could stand on it relaxed instead of leaping/spinning/rushing over it.

Cinna is a fat fuzzy feral winter pony already -- I did work her last week Friday (only lunging because DH was working overtime, boo) and the goal is to fit in some more work this week. Now that it gets dark so early, the lights will be instrumental on any day that it's not freezing/stupid windy.
At any rate... nothing terribly new or exciting here, just settling in for a long winter of dark days and cold temps :( my least favorite. Brrrrr.
Posted by TrainwreckInTeal at 8:12 AM