So one of the things I'd like to do better in 2018 is track my workouts with the horses and write about them. I half-heartedly started and stopped doing that a few times in 2017 (and of course I tried to semi-regularly chronicle them here), so I'm trying again. I bought a dedicated notebook for this purpose, but it won't be here for a minute, so I decided I can just use the blog for the handful of workouts I manage to squeeze in this month, between weather and traveling.
After I rode Ruby last week, temps dropped again, so my Thursday and Friday were quiet -- relatively speaking that is, because Friday one of the dachshunds gave us another health scare, although all seems to be fine now (knock on wood). 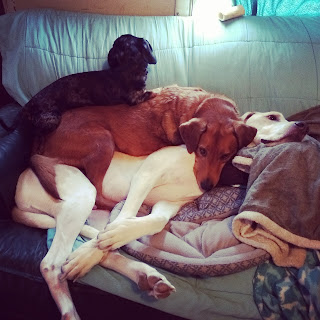 I initially had high hopes for Saturday, because early last week they were forecasting it to be over freezing. As the week went on, the forecasted temp got lower and lower.... Boo. Saturday morning I had some errands to run, so I was hoping by the time I got home it would have warmed up enough to ride. Tragically it only got to 25, but I tried to make it work anyway.
I opted to work Cinna, since I figured she needed it more. I caught her and headed over to the grooming area, which set off a chain reaction -- the geldings crowded the fence behind the grooming area, which is like the 10 square feet of turnout that puts them out of Ruby's sight in her turnout, so naturally she needed to start running the fence line and screaming. Because, horses. 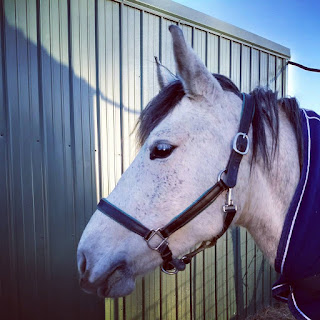 I finally realized the quickest way to make that stop would be to just start working Cinna, because then Ruby would be able to see her. I was on the fence about riding (the wind was pretty biting) so I tacked her up in the western saddle (with a dressage bridle, because #identitycrisis), grabbed a lunge line and my helmet (just in case), and headed into the arena.
Things started off relatively fine, and Cinna gave me some stellar, cadenced and quiet trotwork to the left (I distinctly remember thinking I should video it, but my fingers were still recovering). Then we changed directions and the wheels came off. She had several explosive buck-and-bolts, and got pretty agitated about something (imaginary) that she saw in the back pasture. I really wanted to prevent her from turning into a sweaty mess, so I reeled her in on the line a bit and we worked walk-whoa-change directions quite a bit. She's not as solid as Ruby on the whoa/switch yet, but she's definitely making progress! After watching some of her athletics on the line, I opted not to get on -- DH was working and wouldn't be home until well after dark, so it seemed smarter to just wait. Self preservation?
I wanted to accomplish a little more with the workout, so I stripped the tack and threw a cooler on her and we hand walked the trail. She gave the hairy eyeball to the neighbors goats and sheep, and then attempted a bolt when some jerk was hotrodding down our road and she could hear but not see him. But by the end of the walk she had majorly chilled out, and I opened the back gate so I can access the trail from the back pasture next time, instead of walking around by the road. I think if I reverse the direction next time we work it, she can get all her dumb out in the field/isolated trail section, and then be calm by the time we walk by the goats and the road. Maybe? 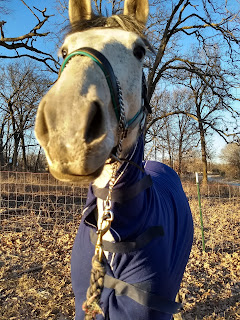 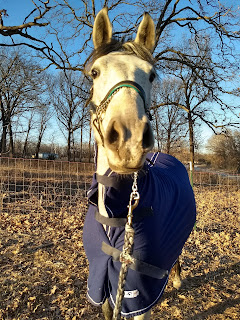 At any rate, even though it wasn't necessarily what I wanted, it was still a productive session, and I'm glad I layered up and made myself do it. Especially since Sunday was literally nothing but buckets and buckets of rain (we have standing water on probably 60% of our property). The good news is we needed the rain (although maybe not all of it at once?) and the forecasted temps this week look super nice (above freezing, hooray!). I'm hoping the arena dries out in a reasonable amount of time so maybe I can ride more this week, and cajole DH into some new media!
Posted by TrainwreckInTeal at 7:18 AM