I'm gonna interrupt the regularly scheduled (horse) programming for a brief personal announcement -- although since my personal and horse life are so intertwined and codependent that changes to one invariably affect the other. This is no exception. If you've been following along for a while, you may remember when I wrote about DH being promoted to captain, and then over the next few months I lamented how his changed work schedule was impacting my barn time as I tried to juggle things.

While we were in Hawaii, DH got a very unexpected but exciting phone call -- he was promoted to major. He had interviewed for the position before we flew to Seattle last month, but there were several other majors interested in transferring to his prison, so he just chalked it up to good practice interviewing and better luck next time. But apparently his dedication has not gone unnoticed, and he was selected.
I can't even begin to describe how proud I am, and what a big deal this is. To go from COI to major in less than nine years is unheard of, especially at his age. And particularly being promoted at the biggest institution in the state. He beat out experienced and well-qualified majors who wanted to transfer, so the amount of trust upper management has in DH's abilities and skill set is humbling. Of course it helps that he's been the acting major there since his previous boss transferred out 5 months ago -- a situation that caused no small amount of stress for us as he took on increased responsibilities and hours with no corresponding increase in pay. But all's well that ends well, right?
This week is his last week on his old captain's schedule (goodbye 4 am wake up calls four days a week, I will not miss you!), and he'll transition into a "normal person" work schedule. I'm not sure who is more excited for him to have weekends and holidays off, him or me. I'm already planning weekends at VHR, and he's scheming for more days on the river. 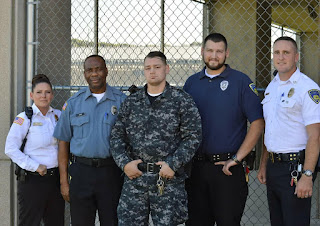 Adjusting to his new schedule won't be all sunshine and roses -- for the last nine years, he's always had a weekday off (useful for scheduling appointments and errands so he didn't have to burn PTO), and for most of that time, he's also worked four 10-hour days, leading to less commuting and more time at home for projects. He's already worried about how a 5-day work week will impact our tentative construction plans for this year, but since it's a permanent schedule change, we'll just have to go with the flow and figure things out day by day.

At any rate, there's your proud wife brag -- since he is way too humble to toot his own horn, I will do it for him! Super proud and happy for him.

Are you ready to hear about the beach ride? Cause that's what I have up next in my queue.... ;)

Posted by TrainwreckInTeal at 8:36 AM