Hey-o, after my whinging post yesterday, I actually managed a ride last night! Be proud, it was still cold AF and I'm sure I looked like a moron, but we got it DONE.
When I left work, it was randomly 27 degrees (wayyyyy higher than the forecasted temp for the day!) so I booked it home and prayed the temps wouldn't drop too fast. I layered up and headed out to the barn -- I opted to ride Ruby, since I figured the odds of dying were lower ;) she seemed annoyed when I stripped off her warm winter blankets, but settled quickly when I tacked her up and added a cozy quarter sheet. 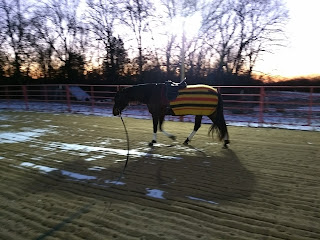 She warmed up fine on the lunge to the left, but when I asked her to switch to the right she was pretty sure she'd never actually lunged that direction and just COULD. NOT. On the plus side, there was some very impressive lateral work as she danced around the arena with her head pointed at me and her haunches out at the end of the arena. There was also some bucking and kicking out, which I was giggling too hard at to get adequate photos or video of, sorry....haha.
She did eventually settle down, so I hopped on. Shockingly, the top layer of my footing wasn't frozen, although I still limited 85% of the ride to walking. We worked some figures, and a little lateral work. Initially she was way too lit to work on halts, but she did eventually settle in and act like the Ruby I know and love. She also gave me some super fun and adjustable trotwork, particularly to the right! Because of the temps, we only did a few circles each direction at the trot, and I opted not to canter at all. Cinna half-heartedly pinned her ears at us over the fence a few times, but there was significantly less angry lunging into the panels, so I think that's improving as well!
Overall, I'm glad that I braved the weather to put in a small amount of work. Ruby seemed to enjoy it also, and I kept it light enough that she didn't break a sweat. Hopefully the weather continues on the upswing or I grow some balls and manage to keep on riding with lots of layers!
Posted by TrainwreckInTeal at 6:30 AM