Sunny Sundays are for Shenanigans

After an ungodly amount of sleep Saturday night, I felt more or less human Sunday morning. I (slowly) did chores, and all those miscellaneous little tasks that had been bothering me. We have an excellent farmsitter, but I'm super type A so I wanted to re-do some things my way, haha. After I had things back in a semblance of order, I went inside and showered while the horses enjoyed stuffing their faces in the hay feeder and sunbathing.
I had previously made arrangements with my former BM to come down and help her with a training horse on Sunday -- we've worked together enough that we have a solid system in place for me being her "hands on the ground" when she is doing initial backing, and introducing new concepts to young horses. Before I left, her latest training project had been sat on for the first time, and done some walk/trot on a lunge line. While I was gone, they solidified W/T off the lunge, so I popped down to the barn for the training horse's first canter under saddle. It was the best kind of training event -- a total non-event, as the sweet little mare picked up how to canter with no fuss, and on the correct leads even!
The hardest thing for me about having all the horses at home is the lack of the social aspect of a boarding barn -- by nature I'm a very social person, so being alone all the time riding and working my horses gets monotonous. Luckily, with the barn only a mile away, I can still hang out! I spent some time catching up with some of the boarders, and then stuck around to help take some sale photos of one of the horses in training, soaking up the gorgeous sunny day. Before I knew it, three hours had flown by (which was always my problem at the barn, time getting away from me, haha). I reluctantly said my goodbyes and headed back home to put some rides on my horses!
As I walked in the door to change into breeches, DH was heading out to the gym. That put a mild crimp in my plans, as I was hoping for some media, but I figured he would be back by my second ride. That meant Ruby was first up to work, since she is trustworthy to ride while no one was home. She was much less dirty than Saturday, so I whisked as much of the dust off as I could and saddled up. I tossed her out on the lunge first just in case there were going to be any dramatics, but I needn't have worried --  she was all business. I hopped on board and planned a simple ride focusing on steady rhythm and geometry. 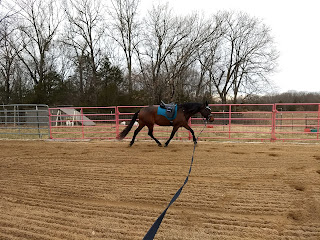 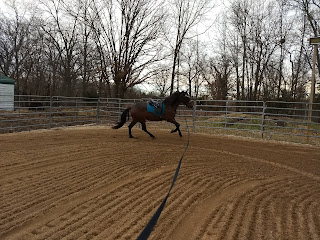 We had a brief hiccup in the beginning of the ride, as the goats decided to play king of the shed -- this is not my favorite game, because it's very noisy and distracting. Ruby has also only ridden by the goats a handful of times, so they're still a bit new and terrifying. We stopped to look at them for a minute, but then we went back to work. Aside from one brief spook into the canter, she settled right in to work. And after dealing with the goats, she didn't even bat an eyelash when two roosters decided to have a fight (complete with spurring each other and leaping through the air) 20 feet outside the arena gate. If there's one thing our farm is good for, it's desensitization to random shit... haha.
Something new that we worked on that she took to like a fish to water was figure 8's across the short side of the arena -- since my arena is a hair over 20m wide, the circles were about 10.5m(ish). The first few she was confused and struggled to find her balance, but once she sorted out what I wanted, she was a rock star. I need to be better about incorporating lots of figures into my rides, so it's not just "go around in circles on the rail". I'm really bad about not being inventive enough to make sure the horses are actually paying attention and taking direction from me! We also played with a trot lengthening up the long side each direction -- I asked for those early on in the ride, because I knew her lack of fitness would keep things short. She worked up a light sweat, so we walked out until she was dry, then I untacked and turned her loose. 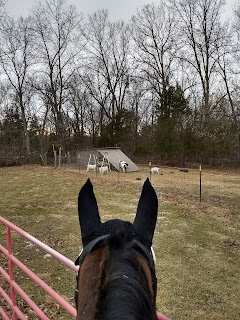 I grabbed Cinna next, and got her tacked up -- by this point, I was expecting DH to be home, and he wasn't. I tried calling, but he didn't answer. I was stumped -- I assumed he'd be home soon, but I didn't want to get on without letting someone know I was riding. I headed out and tossed her on the lunge to kill some time, and focus on working on the lunge at the walk, since that's still a weak point. By the time I was ready to get on, I still hadn't heard from him, so I messaged some friends his contact info and told them if I didn't check in in an hour, let him know. I took a deep breath, and climbed on!
The goats at that point decided it was a great time to play a tag team game of running and climbing on the arena fence, and Cinna was definitely on alert. I got her attention back, and we just worked on some easy figures and changes of gait. She was very, very active in the mouth, which is becoming a theme in this bit, so I swapped it out after the ride. I just focused on keeping my hands stable on her neck at the trot, and letting her sort out her head and neck while I focused on my position. She got a little snotty in the right lead canter and decided she couldn't bend (similar to last time, I think, where she almost ran us into the fence). So we cantered around for a few laps until she realized she could, in fact, bend, haha. She was pretty stiff for most of the ride, so I just focused on relaxing and keeping her steady, and constantly asking for some bend, and rewarding when she gave. It was a pleasant ride, although she worked up a bit of a sweat. DH still wasn't home so I cooled her out in the arena, and then turned her back out to roll and coat herself in dirt.
About that time it was time to get started on evening chores and dinner, so I had a low-key evening. I'm just glad I fit in workouts with both girls when the weather was nice -- while short, it was a start! Hoping to work fitness up to having some lessons in the not too distant future! :) Last night the girls had to trailer up to the barn for a quick farrier appointment, and the temps had dropped 20 degrees, so I gave myself the night off from riding. Hopefully today will be a little warmer, and Wednesday is supposed to be back in the 50s!
Posted by TrainwreckInTeal at 7:00 AM