I actually managed to get more done than I thought I would this weekend, which was a nice surprise! Saturday morning the girls had a farrier appointment. The weather finally warmed back up a bit, and they were LIT when I turned them out (to burn off some energy before the appointment). That helped a little, but getting off the trailer and then walking up the driveway to the barn, Cinna was still a raging horse kite. As in, passaged up the entire driveway. Shitty passage, but there was definitely hang time, haha.
Ruby got trimmed first, and was perfect, as per usual. The farrier commented on her great feet, although with the weather we're having, she was a little thrushy behind. Cinna strutted out of the stall and basically cat-walked up the aisle to the cross-ties -- the farrier laughed and asked me if she always moved like that. I wasn't sure if he meant it in a good or a bad way, but apparently he was impressed. I showed him some photos of her under saddle and we chatted about her propensity to be a huge mover when she was relaxed, the problem was just finding that relaxation. She was a bit of a shit for the first hoof, but I kind of expected some theatrics, so the addition of a chain reminded her of her manners and she let him trim the others without a fuss. He did find a small abscess in one of her frogs -- he showed me a nice little gusher of pus. She never took a lame step, not even on the lengthy gravel driveway, so clearly it wasn't bothering her too much. I did opt out of riding her later, just in case, and I'll keep an eye on it (since we're continuing to have gross weather). Then she hung out in a stall like a grown up horse while I cleaned stalls and did some chores.
In the afternoon I had some time to ride Ruby. I put her back in the Verbindend (I've been riding in a different bridle with just a generic eggbutt snaffle on it), and she was great. Didn't have the propensity to get root-y that I was noticing before, and super willing to stretch without curling. I was worried the ride would get off to a bad start when I was in the process of swinging my leg over, and Cinna and Jack both exploded like a horse tornado only a few feet off the arena fence, but Ruby just gave them a dirty look and let me get settled. Good mare. 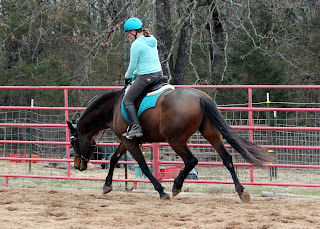 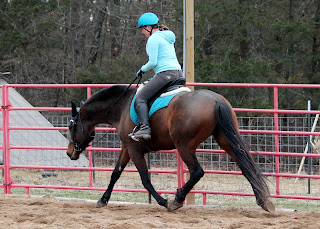 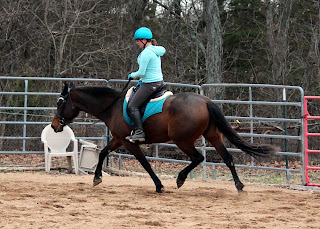 We had absolutely no issues with the elusive right lead Saturday, which was great. I think part of the problem previously is that I was overthinking it and overbending her -- I can't remember which blogger wrote about that, and how too much bend was actually preventing the horse from picking up the right lead, but it clicked something in my head. I certainly wouldn't say the problem is solved yet, and it might have just been a fluke, but I'll try it again next ride and see if it keeps working. 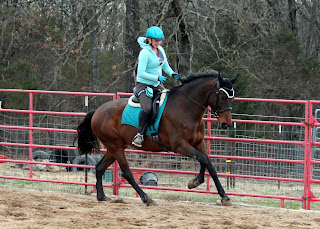 The rest of the ride was uneventful in the best kind of way. I rode in my Schleese for the first time in a while, and I think I could have dropped the stirrups another hole. I'll just toss the rest of the photos up, I don't think I have anything else coherent to add about the ride. Just trucking along, putting in the miles and those wet saddle blankets. I haven't really had many under saddle photos of Ruby in the last year or so, but now that she's home, it's nice to be able to have some progress shots! (although DH is now grumpy about taking photos, so I might not have any for a while besides between the ears shots haha). 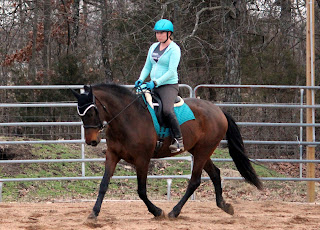 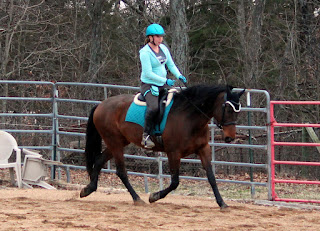 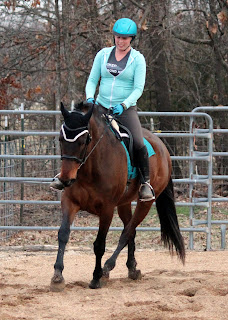 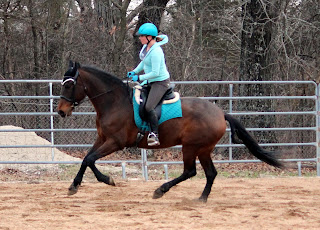 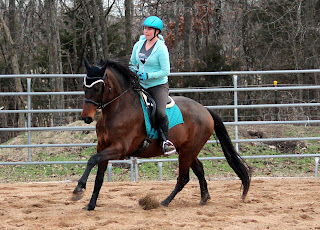 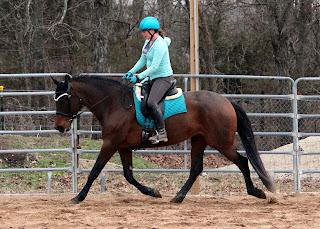 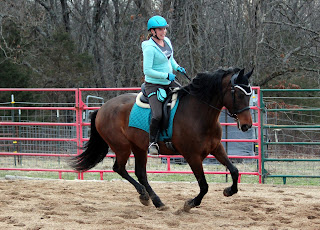 Sunday, we had plans to visit my family a few hours away, so I had no plans to ride. But Mother Nature but a kibosh on that, in a major way. Come back tomorrow to see why ;)
Also, I've convinced one of my best friends to join the "dark side" and start blogging! If you want to take a peek and welcome her, check out Elucidations of an Equestrian Book Nerd!
Posted by TrainwreckInTeal at 6:00 AM