I know in yesterday’s post I complained about everything being soggy, but since I started that draft last week, things actually had dried out some by early this week. I had DH drag the arena Sunday to let the footing dry out, hoping I would be able to start riding again in the evenings this week. Monday ended up being a wash – DH and I both had dentist’s appointments and then went out to dinner with a friend and stayed out wayyyyy too late on a work night.
But Tuesday was sunny and 70 most of the day, so I was excited to ride! Of course, as luck would have it, it was overcast and cooling down by the time I got home, but I still headed out to catch Ruby anyway. I was actually hoping for some media, but DH ended up being called away to the neighbor’s to pick up a 4 wheeler, so this will be a horribly boring post (as I somehow managed to forget to take any photos until we were done?).
We had a really productive ride that I was super happy with. She came out pretty lit up, but polite about it. I wanted to focus on controlling that rogue left hand of mine, so tracking left I hooked a finger through my grab strap to stabilize it. We had some really nice trot work, and at one point we came off the short side onto the quarterline and I just thought about leg yielding and she just effortlessly floated to the rail. I had a little more difficult time figuring out how to mitigate the narcissistic left hand when we were tracking right, but finally I did the same thing (finger through the grab strap) just with a much longer rein. She was feeling really forward, but we experimented with transitions within the gait and slowing down the trot with my seat. By the end of the ride, she felt much more adjustable (at the trot at least, although we had moments at the canter).
The canter work was also pretty excellent. Left lead is almost always great and fairly adjustable, but we struggle on that right lead. She picked it up, first try, and actually it felt even more cadenced and adjustable than the left! I was so excited that I just kept riding it, but she got tired and rather forehand-y pretty quickly so I found a good moment and quit on that. Duly noted Ruby, we both need fitness work. I really also want to get some poles and cavaletti so I can start incorporating those more – Missing all the options at the barn right about now!
She worked up a bit of a sweat, so after a few laps of the arena at the walk, I thought about trying the field again. I’ve made some changes to both Ruby’s diet and routine since we had our last less-than-successful trail experience, so I wanted to see if things had gotten any better. I was losing the light too quickly to do the whole loop (plus I wanted to start small and manageable), so we just walked a few hundred feet out into the pasture and then back. Several times I asked her to stop and relax, and petted and praised her for doing so. I also kept up a running commentary on everything we were seeing, as she seems to appreciate it when I “converse” with her. She gave the goats the hairy eyeball, and she definitely was more confident walking back “home” than she was walking out, but otherwise was a nice relaxed, swinging walk and we didn’t have any bit chomping, spinning, or rearing. So I’ll call that a win! 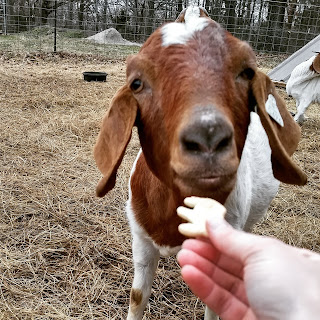 After I untacked, I cleaned the sweat off her and threw her back out in her swamp, where she immediately rolled *womp womp* not unexpected though, so it’s fine. I was pretty pleased on the whole, and looking forward to repeating it last night. Unfortunately I spent the evening driving my mom to the ER and taking care of her (everything's fine, well fine-ish), but it wreaked havoc on both my plans and my sleep schedule (I didn't get home until like 3 am). Thankfully, the weather looks nice this weekend, so hopefully we'll get to put in some more good work!
Posted by TrainwreckInTeal at 7:30 AM