Although we're still drying out from the unexpected snowstorm Sunday, we did get the arena dragged Tuesday night, meaning it was perfect for me to ride last night.
On my quest to alternate working the girls, that made last night Cinna's turn. It got off to a not-so-auspicious start right away, when I had to slog through ankle-deep mud to catch her. When I was trying to maneuver her through the barn door while leaving Jack outside, she pulled away and took off back to the far side of the turnout, soaking her lead rope in mud. I caught her again, got her through the barn, then swapped her mud-soaked lead rope for a clean one.
I was attempting to fill a bucket of water to soak the filthy lead rope in, when she spooked at a feed bag and took off again. By this point I was mumbling choice words under my breath about auctions and dog food and glue. On the plus side, any lingering concerns I had about a possible lameness after the frog abscess (and then subsequent mud) were laid to rest as she merrily trotted and cantered all over the property, sound as a dollar. I finally corraled her in an empty turnout and caught her for the THIRD time, swapped out another now-filthy lead rope AGAIN, and debated the merits of just putting her back and going inside to collapse on the couch (for some reason this year DST is kicking my ass and I'm insanely exhausted). I was starting to get pretty frustrated, and she's not the kind of horse I can ride when I'm already annoyed.
But I persevered, and after a quick refresher of lead rope manners (aka yanking it out of my hand to gallivant is NOT okay), Cinna and I headed over to the grooming area. Which was covered 2 inches deep with standing water. I sighed, envisioning another explosion about standing in the puddle, but she splashed right into it and stood without batting an eyelash. Win! We tacked up, and I decided to try her in Ruby's PS of Sweden knockoff and Verbindend. I had to put it all the way up on every hole, and it was still maybe a smidgen too big, but we made it work.
DH still wasn't home at this point, so I tossed her out on the lunge for a minute. I wish I were better at simultaneously videoing and lunging, because she was doing the most ridiculously cute little hunter canter, poking along with her neck stretched out. Not a single bolt, scoot, or hint of dramatics of any kind. Which made me highly suspicious, except she had done a lot of running away from me dragging a lead rope, so maybe she had just worn herself out.
I wanted to use the ride to test out an app I downloaded called Equilab (or as I'm jokingly calling it, the poor man's Equisense). I turned it on, and started riding. Between the pre-ride gallivanting and the lunging, I figured I wouldn't ride very long.
I spent the first half of the ride working on centerline and halting. Sometimes Cinna halts very nicely. Sometimes she gets very angry about it and roots the reins out of my hands. Sometimes she flings her head straight up. The last two are more common and less fun. I concentrated really hard on setting her up for the halts and asking very quietly, and whaddya know -- when I was quiet and methodical about my request, she was quiet and methodical about her response. Funny how that works!
We did do some trotting and a few circles of canter each way. She had trouble picking up the left lead the first time I asked, but was fine on subsequent transitions. I was ready to end on a good note, but on our last canter-trot transition, she spooked hard at DH, who chose that moment to step out from behind the tack shed into her line of sight. Pretty sure staying with her as she teleported across the arena undid all the good work my chiropractor did at my adjustment on Monday, but I'm gonna give myself a pat on the back for not eating sand. So of course I asked her to canter again, so we could redeem ourself with a nice transition to end on.
Since DH was standing there anyway, I cajoled him into accompanying us on a field walk, since the last one was so disastrous (leading to me having to dismount and handwalk her back). She was great on the way out, and much more manageable on the walk back. Having DH there as her security blanket made her much more brave. I think we'll try that a few more times before I attempt it alone again :) 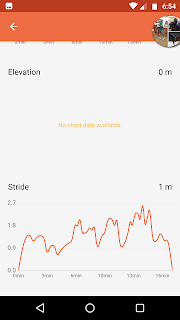 Once she was cooled out, we walked back over to untack, while DH shoved her full of candy canes. Of course she promptly rolled in the mud as soon as she was turned back out, but with our current forecast, she's probably going to get a few days off due to rain anyway, so whatever.
I also finished up making notes in Equilab -- it has a neat feature at the end where you can rate yourself and the horse on a scale of one to five (in terms of mood), track what kind of ride it was (flatwork, dressage school, endurance ride, etc) and also make notes. I used the notes section to write about what tack I used, and anything else I thought was notable from the ride. I also added a profile for both Ruby and Cinna, so I can track their rides and see if it notices differences or trends. I just shoved the phone in my breeches pocket last night, but for future rides I plan to use my horse holster. I also want to download an interval training app (thanks Nicole for that really good post!) so I can get a better idea for
Equilab's accuracy in terms of time spent in each gait. Obviously with only one ride under my belt with it, I can't make any claims to accuracy or long-term usability, but for a free app, I have no complaints. Even if I just use it to make notes about how often I ride each horse, for how long, and use the notes section for reminders, it'll be useful.
Posted by TrainwreckInTeal at 7:00 AM