This Sucks (am I talking about vacuums or the weather? You decide!)

Welp, I woke up to another two inches of rain right after everything had finally started drying out. At least it was nice all weekend? I took advantage of the sunshine and spring-like temps by spending most of both days outside and checking some things off my to-do list -- one of those things was introducing the girls to my vacuum. A few years ago, I picked this up used pretty inexpensively at our local tack store (which is on my list of topics to write about, because I LOVE that place), and I used quite a bit of consignment credit I had built up, so it cost me like... $20 out of pocket.
I attempted to use it on Ruby once or twice when she was a baby, but she was not interested, and since I wasn't riding much then, it sat in a box in storage for a while. I've thought about it several times in the last year, so I finally remembered to pull it out a few weeks ago. The hose had a break in it, but luckily the design lent itself to just trimming the hose to be a little shorter, and it still works just fine. The attachments thread on each end, so I could actually shorten it even more if I were so inclined, and it would still work just fine! 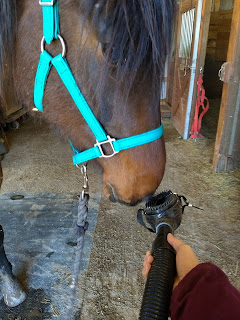 I started with Ruby, because I figured she'd be the easier study. I let her sniff the vacuum all over, then ran the attachments over her body without turning it on. She didn't care, so she got liberally rewarded with cookies. Then I stepped away, turned the vacuum on, and when she came over to investigate, more cookies. After that, it was no sweat to run it all over her body. I even cross-tied her and set my phone on a shelf to make this silly little video. Please ignore my hobo-like appearance, we were doing lots of clean up work on the farm all day so I was wearing clothes I could destroy, haha.
She did get a little nervous when I inadvertently pulled the cord taut against her chest, which was obviously my fault. She settled right back down, and after that I was more mindful of where I had the cords. I didn't really do much actual cleaning her up, mostly just wanted to desensitize her to it so I could start using it more in the future :) especially in the winter when there's so much scurf and dirt, and no bathing, I think it will help my horses look less raggedy and unloved.... haha.
I figured Cinna might not take to it quite so well, so I enlisted DH to help. I wanted him to just be in charge of keeping her (more or less) still, while I worried about the vacuum. She actually shocked me, she gave it the hairy eyeball initially, but she came around really quickly! She got a little wiggly when Jack started screaming for her from outside, and he kept racing around the barn and pelting it with mud, so she jumped at the noises a few times, but she seemed fairly unconcerned by the vacuum. 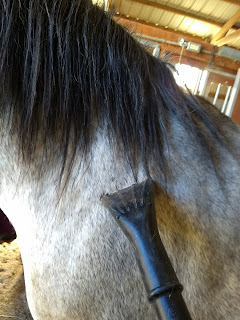 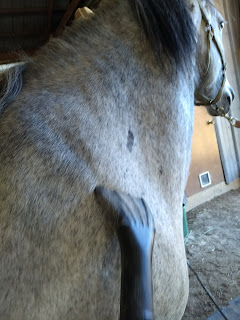 Same as with Ruby, I didn't worry too much about cleaning her up, just wanted to get her comfortable around it so I can start using it more in our regular routine! All in all, a very successful hour of "training" with the girls, they're such good eggs! :)
Stay tuned for entries about the fun stuff (riding!) later this week! ;)
Posted by TrainwreckInTeal at 5:30 AM