Hey look, I finally have time to write! Do you want to know why? Because my arena is currently a wee bit too damp to ride in without being dragged, and DH doesn't have time to drag it. Why is it a little damp? IT FINALLY RAINED! And there is more rain in the forecast! WHEEEE!
So because I can't ride, now I actually have time to sit down and catch up a little. As expected, last weekend's GMO show was STUPID HOT -- but the show manager was able to start the rides at 8 am, and we whipped through 30 or so rides to be done by like 1 pm. It actually worked out super well! I had a great time seeing friends, photographing rides, and helping run the check-in table. I even managed to sell a few photos, so I may or may not have a treat yo'self post coming.
Sunday I bailed on the idea of taking more pictures at the following day's jumping show and DH and I escaped to the river. We decided to go out alone and take Cici, one of my dachshunds, with us. I've been wanting to take her out on the water (mostly to play with her dachshund-sized life vest, let's be real) but I was apprehensive about taking her out in a big group or with other dogs, since she has some fear issues and can quickly get defensive. I thought taking her out alone would be the easiest way to help her acclimate, and I think I was right! She started out tense and shaky, but gradually got more confident in the boat, and she even had a blast running around the sandbar. She was not wild about her life vest or actually swimming in the river, but I think she'll come around gradually.
Sunday night was actually the goat shenanigans in the video I set up to post Monday, and Monday was actually even funnier (although not on video). I headed out to ride Ruby, and the minute I walked into the arena, both bucklings got back on the roof and started leaping around. I was a little concerned about what Ruby would think of that, so I tossed her out on the lunge first (because I like being alive). I let her walk around in circles loosening up while I giggled at the goats -- at one point one of last fall's doelings (Riesling) decided to get in on the action, and when she was about halfway up one of the bucklings slid down into her like a bowling ball into a pin and they both went tumbling to the ground. 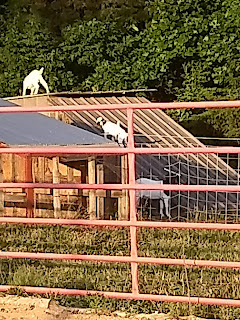 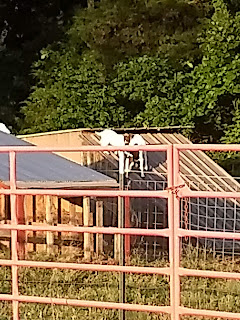 Thankfully, Ruby didn't care at all about the noises and flailing goats, so I was able to get on pretty quickly and have a nice ride. She was very quick off my leg and I was able to move her back and forth on and off the rail at will. She also picked up the right lead every time, no problem, so I think we're slowly making progress in that area! She also let me do a lot of influencing the tempo of the canter, sending her out and bringing her back (probably not to the point of an actual lengthening, but we had several distinct tempos at the canter).

It was pretty muggy, so we both ended up soaked in sweat quickly. Periodically I would look over to check on the baby goats, but they were still on the roof. I actually started to get a little concerned they were stuck, but as I climbed off and headed out of the arena, they finally got down. Ruby enjoyed a good hose-down, and then I actually moved the big fan in to blow on her to dry her off -- with as humid as it was and with her being wet, I wasn't sure her stall fan would cut it.
The rest of the week hasn't been quite as fun, between some adulting (got half our round bales for winter, bai money!), and the aforementioned rain (although I have 0 complaints, we needed it VERY BADLY). DH has had a wacky work schedule this week, working both his usual hours and then having to return to work around 9 for a few more hours, meaning my sleep schedule (and therefore my morning schedules) have been a little flexible this week. But at least it coincided with the rain, so I don't feel like I'm really missing out on any work with the girls. Today is the first day of summer, and our high temp is only in the mid-70s (apparently Mother Nature confused spring and summer, because it's been 90+ for like 3 weeks haha) so even though everything is soggy, I fully plan to enjoy lots of time outside over the next few days! Maybe this weekend if the weather is nice enough, I can even trail ride :)

Posted by TrainwreckInTeal at 5:01 AM