Even though I woke up a bit sore Sunday morning (the lesson kicked my butt in the best way), I was impatient to get right back to work! So after some Sunday slacking with coffee and my DVR, doing chores, running errands, hanging out with a friend, and the like -- Sunday afternoon was pony time!

I started with Ruby, because I wanted to take some time to stretch out my stiffness and also run through the mental checklist I put together in my lesson in terms of where my body parts needed to go -- that's a lot easier on Ruby because as a general rule, she'll just pack and let me focus on me, without the silly baby shenanigans Cinna likes to bless me with occasionally, haha. Towards the end of the lesson Saturday, DT had told me to do as much work off the rail as possible, to keep both myself and Ruby honest into both reins, not being lazy and letting the rail do half the work for me. So after a nice loose walk to warm up, I just checked my buttons both ways up and down the quarterlines and diagonals, focusing just on me and my building blocks. Square turns off the leg were the name of the game, and Ruby was ON FIRE. I do love that horse, so much. 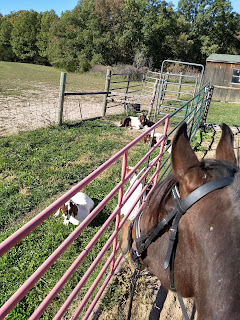 I mostly worked at the walk, because that's the easiest gait for me to work on my own position, but we did do a little trotting and a single circle of canter each way -- no issues with leads, hooray! Afterwards we hacked out... and guys, SO HAPPY. I haven't had time to update here, but within the last week I've hacked Ruby out more than once on a LOOSE REIN, basically back to how she used to hack out when we boarded with trails. IDK whatever in her brain knocked loose, but I don't have that awful, jigging, bolting, threatening to rear horse that she's been on my trails basically since I brought her home last December. We even flushed some deer last week and she just watched them bound away. She did give two halfhearted spooks Sunday, but remained soft and on a loose rein 98% of the time. She's the bomb dot com. 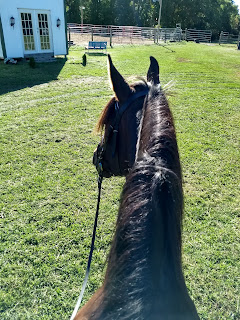 After Ruby got some well-deserved grazing in the yard, it was Cinna's turn. She's been coming along so well since the clinic -- one ride last week I pulled out my cones and marked off a 20 meter circle and we worked on both trotting and cantering through it, and despite some minor steering bobbles, she did manage it at all gaits, and it felt REALLY nice. Sunday I was a lot less motivated (still working through the sore muscles) so we spent quite a bit of time focusing on getting a nice, ground-covering walk and swinging through the back. Once she felt really soft and relaxed, we did trot and canter both directions, and holy cow, her canter transitions were like butter (a stark contrast from the clinic when they were a hot mess express, lol). 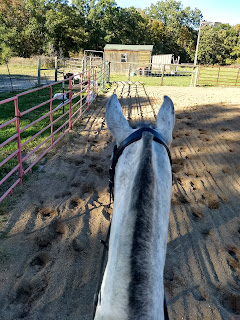 She's still a little uncertain outside the arena (the arena is her "safe space") so I opted to just end in there -- nobody was home and I wasn't sure my aching muscles were ready to deal with any teleporting spooks, so we just quit while we were ahead! 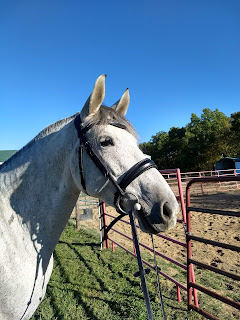 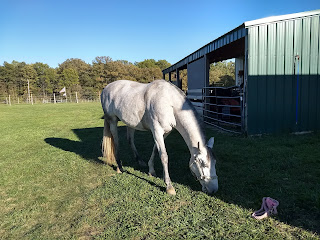 Basically I got to spend the afternoon basking in how much fun these mares really do make everything. They're so different to ride and I cannot express how much I appreciate having the chance to stretch my skills by not riding the same type of horse all the time. It's something I hope I never take for granted, and I'm looking forward to where they can take me in the future!
Posted by TrainwreckInTeal at 5:00 AM