Hot damn you guys, we got a minor break in the heat wave (very minor) and I am MOTIVATED. We all know that will last approximately two seconds, so I'll enjoy it while I can. 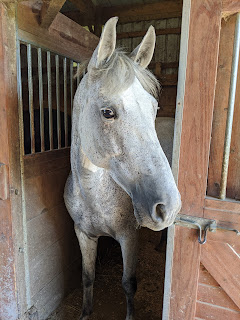 We spent a long weekend out in the heat getting other necessary things done, but I knew it was supposed to be cooler this week, so I figured it would be good for riding in the mornings again. I talked to my new boss last week (new because my division got reorganized, not because I changed jobs or anything) about logging on for work a little later so I could go back to riding in the morning, and she was fine with that. So I was super pumped to get up and go... annnnnnd then it was drizzling when I got up to do chores. The forecast didn't look super promising but I decided to go for it anyway -- we got drizzled on a little tacking up, then it mostly quit for our ride.
Despite her clear FEELINGS on the rain, Ruby was super good and came out ready to work. My EquiSense was real dead (can't remember the last time I charged it, oops! #badattech), so I didn't get any fun data from the work, but it felt pretty good. Some nice moments of trot and some great transitions. Canter is still hit and miss, since we're out of shape, but she was very obedient and tried hard, so I can't ask for more than that. After I finished up, she got hosed off and put back in her stall in front of a fan to dry... and about 30 seconds after I got back into the house the skies opened up with a deluge of rain. So the timing for that ride couldn't have been more perfect!
In other tangentially blog-related news, I sold my Pixio. I hadn't used it since December of 2018, between house construction/not riding/time management. Mostly because I kept ending up with 40+ minutes of footage that I'd then have to pull onto the computer, upload to YouTube, and then try to find time to watch/edit down into something useful. Plus dealing with the garbage laptop I used to have before WFH meant that any time I tried to do anything with the footage I usually ended up annoyed enough that I wanted to drop kick the laptop. So footage just kept stacking up and stacking up and I wasn't doing anything with it :(

It didn't make a ton of sense to have a $$$$ system sitting around in my closet not getting used, so I put out some feelers about selling it on FB. I assumed it would take a while, but apparently since there are like NEVER any of those available used, it sold in less than 24 hours. It's going to a really cool trainer who I think will get a ton of use out of it (certainly far more than I ever got!).
But, since I really did like having riding footage to review/share, I decided to go ahead and grab a Pivo. Definitely a little late on the bandwagon here, because I know about half the bloggers I follow already have one, but I'm still excited to try it out :) I ride with my phone on me (because I pretty much always ride alone), so I'm actually going to use an old cell phone I have lying around for the filming. We'll see if I struggle with the learning curve on the Pivo like I did the first month of the Pixio, lol. Having footage on my spare phone should make clipping/screenshots/sharing SO MUCH EASIER. 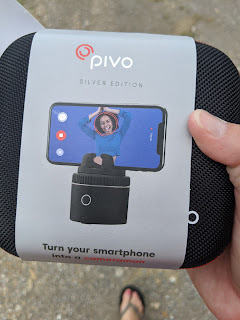 So. Here's to the motivation continuing long enough for me and my dramatic Spanish mares to get back into a steady routine! Maybe even.... *gasp*.... lessons?!
Posted by TrainwreckInTeal at 10:00 AM