OK so remember last post about Trigger's hoof when I was sort of down about how it looked and frustrated that the whole hoof was like... falling apart and gross? I mean, it's obviously still not anywhere close to back to 100%, but after a good trim from my farrier last week, I'm feeling a lot better!

My farrier and I had a long talk both while and after he trimmed it about my concerns. He's been trimming my horses for.... 8.5ish years? (since Cinna was a weeeeee wee thing and I had eight or nine horses). He is definitely aware of my neurotic tendencies, so he didn't hesitate to give me a little bit of a come-to-Jesus chat where he repeated ITS FINE multiple times 🤣 he watched me rewrap the hoof, and he also commented that I was keeping it WAY cleaner than like 95% of the people in our area would bother with, and reminded me how many horses blow out abscesses that no one even notices and then stand in sloppy mud with holes in their foot with no adverse effects. I pointed out how gross and soggy the hoof was, and he fired right back that it had ZERO thrush (unlike one of his hinds, whoops, bad owner). Yes, it was damp from being wrapped 24/7 for going on 2+ months at this point, but starting the durasole would hopefully help things toughen back up.
Obviously his recommendation wasn't to just take off the boot and kick him outside, but he said what I'm doing is working, so keep doing it. We did chat about the hospital plate, and he is capable of doing it, but he priced it out for me and for the price of the plate and a few resets while the hole grows out (not to mention how the care of his foot would have to change), I can buy like a lifetime supply of duct tape for a whole stableful of horses with holes in their feet. If either of us thought the plate would give us a better outcome, I'd do it in a heartbeat, but his foot IS healing this way, it's just slow. The hospital plate wouldn't make it heal any faster, and it would add a whole new layer of complexity and concern to managing his turnout.

I texted photos to the vet after the farrier finished up, and she was also really pleased with how much better it looked with all the dead stuff cleaned away. We had already discussed the turnout situation, and she advocated again to get him out as much as is reasonably possible for me, even maybe turning him out without the boot if I'm willing to clean it REALLY well when he's done and the ground isn't frozen into spikes that might stab tender areas. I'm not sure I'm mentally ready to go there yet (since we got MORE RAIN this weekend) but he did get out quite a bit over the weekend, mud be damned, so I'm trying to loosen up a little and be less of a control freak about it haha. He is much happier getting out for a few hours, and DH is happier cleaning a stall that's a bit less trashed. And the more I can get him out now the easier his transition back to normal turnout will be, whenever the hole grows out enough for that to happen :) 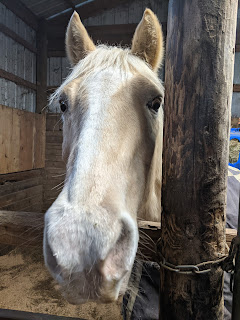 So despite my somewhat gloomy outlook last week, it IS progressing, and I just need to have a little faith and patience -- both of which are hard for me! Thank goodness I have horses to teach me these lessons, over and over again, right? :)