For my birthday this year, DH actually knocked it out of the park with the gift, and my involvement was minimal - miraculous! A few weeks ago we were sitting on the front porch enjoying coffee when he handed me his phone and asked if I thought this would work for a trailer camera. I've mentioned wanting them a few times, and I had a few systems on my Amazon wish list (usually put there after yet another friend got one installed and raved about it lol), but most of the ones I had on my list were wireless, and he preferred one that was hardwired in. I paged through the reviews (including one from someone using it as a horse trailer camera), said I thought it sounded good, and that I was totally fine with this system if I didn't have to help install it (I'm sure you can imagine how that went lol). 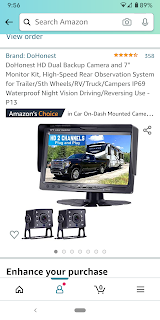 So he went ahead and ordered it, and it arrived the Friday of MDW. We had both taken off work that day to car shop (trying to replace his commuter car that was totaled in the accident a few weeks back and MAN THE USED CAR MARKET IS NUTS), and I planned to use the truck and trailer both days that weekend, so I sort of assumed it would be a little while until it got installed (which was fine, my birthday isn't until next week). But to my surprise, Sunday morning he got up and went outside and starting installing it while I was making breakfast -- he did most of the work solo, and towards the end there were a few parts that were easier with two hands, so I went out and helped a bit -- plus he needed me to okay the camera placement in the trailer :)
As with any project my husband does, about halfway through he got annoyed, and there was plenty of cursing under his breath and the occasional tossed tool, but by the end he had it working perfectly! The monitor in the truck comes on when you start the truck (but can be turned off), defaults to the trailer camera (when it's hooked up), and when you put the truck in reverse it switches to the camera on the back bumper (which I'll get lots of use out of when the trailer is unhooked, since LONGBOI IS LONG and backing it is pretty intimidating lol). The instructions that came with the camera were.... not great, and they referred you to a YouTube video that didn't actually exist, so some of it was trial and error. I emailed the company and they did send me an updated link, but by that point DH had already figured it out. But I guess if anyone else buys this exact same system, let me know if you need the link! lol

This is one of those things I've been meaning to do for AGES so I'm really glad it's all set up! It's so nice to be able to glance over and see the horses just chillaxing during the drive.