*unrelated to blog posts but blogger suddenly stopped displaying my feed earlier this week and so in my spare time (🤣😬🤬) I've been trying to recreate it in Feedly, so if I've missed reading/commenting on any blogs I'm so sorry!*
After we did responsible things with our 3rd stimulus payment (which was literally so long ago I can't actually remember what we did haha) I had a little left over so DH told me to buy myself something fun, since we'd been spending so much on responsible things at the time. In retrospect, probably would have been good to hold on to for all of Cici's medical bills or his new car 🥴 but at the time I didn't know those things were coming and I had some money to burn, and so I checked something off my wish list and grabbed an Equiband System!
It's been sitting in the tack shed for aaaaaages. I kept thinking "oh I should wait until they're more fit" and then once they were actually more fit it just seemed like so much #effor to actually get the bands set up for each individual horse so I kept just moving that to next week on my internal to-do list.
This past Sunday was another hot and humid disgusting summer day. I woke up and my left arm (still recovering from FUCKING CELLULITIS) was basically dead weight. I didn't want to waste the entire weekend day, since those are about the only days I get to work both horses, so I tried to figure out what I could do that didn't require both arms to be functional. Aha! Set up the equibands, since it would be a lot of standing around fiddling with them and the horses shouldn't spend too much time actually working in them in the beginning. I watched all of the fitting videos, read through the instructions, and finally meandered out to the barn to grab the horses.
Ruby was snoozing, so I started with Cinna. I was a bit mentally prepared for that to be a shitshow, both after her shenanigans Saturday morning, and also standing still is not always her favorite thing. But I kept my expectations low, tacked her up with the Equiband saddle pad and a surcingle, her rainbow bridle (since ya know, IT DOESN'T HAVE REINS), and a lunge line, and headed out to the arena. I parked her by the mounting block where I had the instructions and the extra stuff sitting, and started fiddling with the bands. I had good intentions to stuff my pockets full of bribes, but I forgot. Poor abused Cinna. Nevertheless, she stood like a statue as I followed the instruction video and showed her the bands, rubbed them around her body, and then eventually started fiddling with the length on the abdominal one. 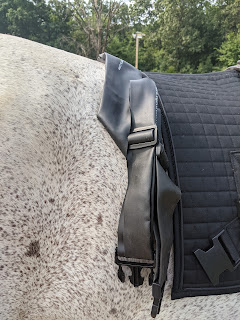 After being content with the abdominal band's adjustment, I started on the hindquarter band. I've seen some differing ideas on whether or not you should do both or just start with the ab one, but I figured I could at least adjust it, that didn't mean I needed to USE it right away. This one took me even longer to adjust, but Cinna was a saint and just stood there with a hoof cocked, baking in the sun and heat. Just adjusting these bands and walking around her had me DRIPPING SWEAT like a disgusting faucet, but she was cool as a cucumber.

I just sent her around in a few circles to see how she felt in them, and UNpredictably, she gave zero fucks lol. I'm still not sure I have them adjusted right, but I labeled her bands and I'll watch some more videos/read a bit more before pulling them out again. Still just sort of fun to get set up, I think it'll be a useful tool over the long term! Ruby was up from her nap by the time I finished with Cinna, so I pulled out my next long-suffering victim.... errr, horse who doesn't mind all my weird experiments.

After I got the ab band situation, I fussed with the hindquarters one. Initially I had it shortened wayyyy too much and it wouldn't even stretch all the way around, so I had to fuss with it more than once to get it at a more acceptable length.

I labeled her bands, put the lot of it away, and let her go back to napping :) Hopefully now that they're at least SORT of set up, I'll be more inclined to reach for them in the future as we work towards getting more fit and making... you know, actual progress? ;)
Posted by TrainwreckInTeal at 5:00 AM 6 comments:

All four of my stalls have fans mounted in the corners. We put them up every summer, and take the fans off the mounts every fall (well, most falls, last year we didn't and they got super dusty and I very much regretted it, ugh). This year, I replaced my fans with reallllllly nice ones from Hyper Tough.

I have an outlet at each stall that they plug in to, but plugging them in and unplugging them every day was really annoying. I realize that sounds incredibly first-world-problem-y, but the outlets are juuuuuuust tall enough that its hard for me to reach them. Enter, technology making my life easier -- wireless remote controlled outlets.

Now all four of the fans are plugged in to one of the little controllers, so I can turn them on and off individually, or all at once. Game changer!
Since I know the video embedding thing is a little wonky, here's a link to a silly video I made this weekend of turning all the fans off an on via remote (featuring some chatter from Cinna who apparently wasn't amused by me, lol).

As a reminder, none of the links to products in my posts are affiliate links, they're just products I purchased (at full price) and liked enough to share.

Posted by TrainwreckInTeal at 4:00 AM 10 comments: 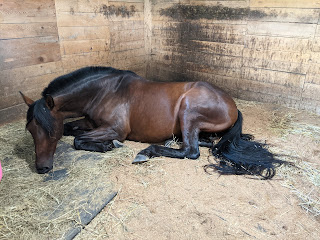 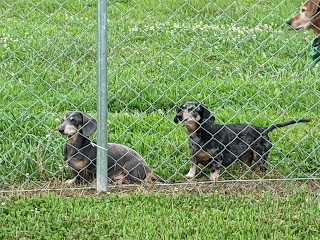 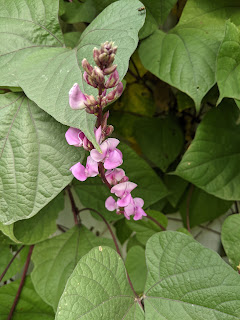 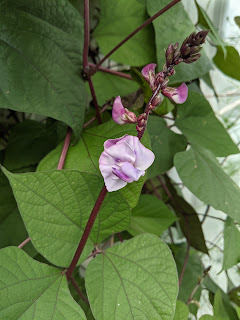 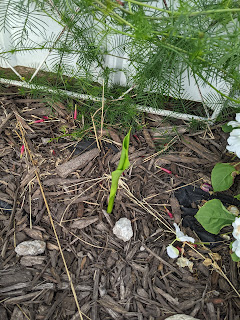 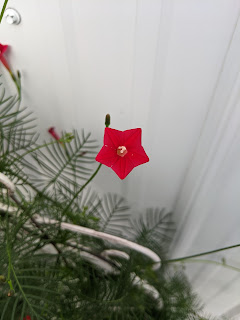 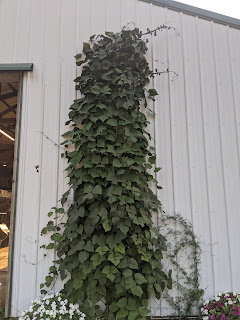 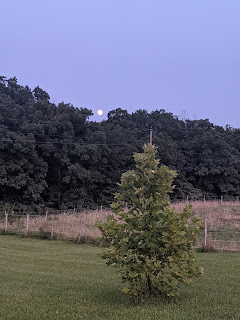 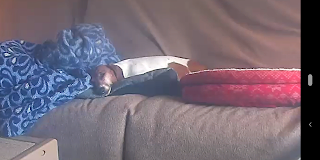 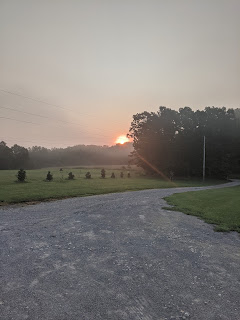 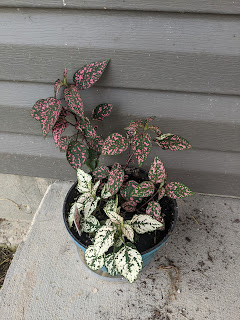 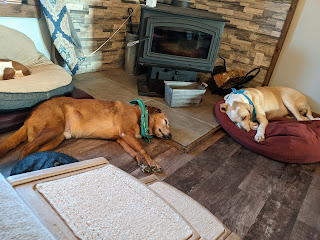 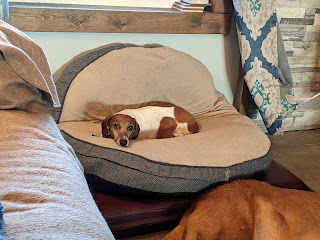 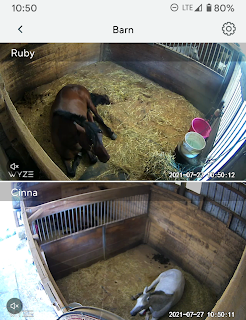 Posted by TrainwreckInTeal at 5:30 AM 4 comments:

Saturday was one of those perfect summer days -- not in temperature necessarily, it was hot AF. But it was such good mix of productivity and relaxing that I wish I could do it every weekend! I was up early to ride horses before it got too gross out. I was super excited to saddle up, but the day was almost ruined very quickly. As I was finishing tacking up and bridling Cinna, the neighbors did something very loud over across the property line and Cinna jumped, bailed, and bolted, ripping the reins out of my hands. I haven't had any issues bridling her for over a year now, and I had no reason to believe I needed to be on guard for spooky sounds at 8 am on a FREAKIN' SATURDAY, ugh. Lucky for me, she made a beeline for the back pasture, so I just closed the gate and waited for her to get it out of her system. She dragon-snorted and bolted around like a lunatic for a good 15-20 minutes (not helped by the fact that they started mowing up front, so she could hear but not see them). The reins survived most of that, but of course on her last pass up from the back, she stepped on them and broke them. She was in a bridle with shitty web reins I didn't care about, but I was still not in a super great frame of mind after I caught her. I wasn't mad at her, just the situation -- I cannot express how much I miss the days 5 years ago when we lived next to an empty field. I guess as she matures this sort of behavior is more of a once in a blue moon type deal vs when she was a baby and it was like every other ride, so I guess maybe by the time she's 15 it'll quit altogether, lol.

After the less-than-auspicious start, we were still able to have some really good work. She was a little high-headed/sewing-machine-ish to start, but she quickly relaxed and lengthened her neck and covered more ground instead of just going up and down. I didn't canter much, since her canter tends to be lateral and icky when she's tired and she'd already done plenty of running, but a circle in each direction to confirm leads and then lots of nice trot work and we called it a day. She got hosed off and parked in front of an extra fan while I rode Ruby.

Ruby was excited to be out and working, and when she's ready to roll, it normally manifests as anticipating what I might want and offering all sorts of things I haven't asked for. While I appreciate the work ethic and that she tries so hard to please, Saturday was a good day to work on remember to WAIT until I actually asked for something. So walk trot walk trot halt walk halt back trot walk trot halt walk halt back trot walk trot around on circles, semi-circles, quarterlines, serpentines, and teardrops ad nauseum until she was like "oh yeah I guess its easier if I just wait until you tell me what you want and then I can do it". Bless her :) she tries so hard, I really do love her.

I wrapped up with the horses by a little after 10 am, leaving the rest of the day open for the river! While I was riding, DH had been prepping the boat, so I just had to come inside, rinse off, throw on a swimsuit, pack a cooler, and we were out the door.

Such a long day full of all the things that make both me and DH so happy <3 I love perfect summer days like that!

Posted by TrainwreckInTeal at 5:00 AM 8 comments: