Final Trigger Hoof Update (unless he does something else stupid)

Amanda asked me about this last week and I realized I should probably whip up a really tidy conclusion to #hoofgate, haha. My farrier was out last Thursday and I remembered to snap a photo of the hoof when he finished up and it was relatively tidy (I won't say clean because it won't stop raining in Missouri so my farm is currently a mud farm). 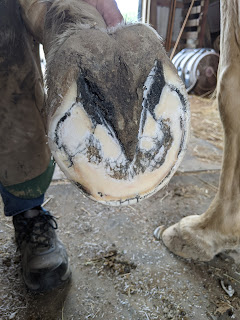 My farrier bevaled around that edge a bit, because there was still a little bit of a crevice that he was wedging dirt up into, but when he's standing on it, it look almost normal. Obviously you'll have to take my word for that, because I'm a dumb ass who didn't take a photo, but there you go. I think by the next trim or the one after, it will look completely normal. There doesn't seem to be a noticeable difference in the hoof quality in that area -- which isn't saying much, his feet have always been a little meh. 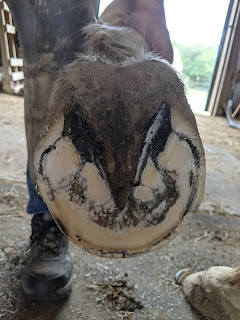 Pulling the link up there to the whole tagged group of posts about this was a bit of a trip down memory lane. I read the initial post about the injury and it brought back all of those feelings of helplessness and not being sure we would get him through this. I really thought this could be a death sentence, with the coffin bone involvement, and yet here we are less than a year later and it's like it never happened. We haven't taken the horses out trail riding too much this summer, with all the rain, but Trigger is still the sassiest. He did go out the last time we hauled to Indian Camp Creek in May, and rode the whole loop without a hoof boot.

I actually took those hoof photos originally to text to my vet, and then I ran into her Thursday evening and was able to just show them to her -- she was thrilled with how it looks and overall just so happy with how the whole situation played out. I mean ideally he wouldn't have stabbed himself with a gate hanger to start with, but once that damage was done, we really couldn't have asked for a better outcome to the whole thing. I'm very grateful for my vets, my friends who let me bounce so many ideas off them (particularly the "is the slow healing because of cushings?" rabbit hole), my farrier for talking me off the ledge more than once, and even some of you lovely readers who shared your own personal experiences with icky hoof injuries or the sturdiest type of duct tape for boots -- it really does take a village and I've got a great team.