Well, I moped briefly and then got on with life, lol. The show secretary and I traded some emails, so for now I am registered as a non-compete and will plan to use the weekend as a mini clinic and grab three lessons from TrainerB, while simultaneously getting Ruby used to the indoor at the show venue (in April we showed outside). I'm second on the wait list if there are any scratches, so we'll see how that goes. I reached out to the photographer and we'll either use the money I already paid for show photos towards artwork from Ruby's portrait session (which we'll do while she's at the show venue to help everyone's scheduling lol) or she might be able to hang around and snap some photos of one of my lessons -- in which case you better believe I will put show clothes on so we can be fancy AF haha.

Realistically this is probably how I should have STARTED the show season, but when I was tallying up costs in the spring it seemed SO ridiculous to spend this much money and not actually like..... SHOW. So I guess the universe just wanted to make a point to me :-P 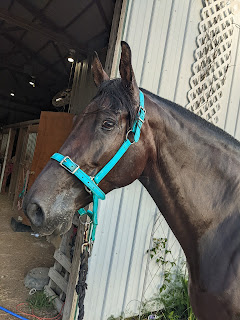 In the meantime, it's been absolutely fucking DISGUSTING out, and some work craziness has resulted in me spending more time in the office than I'd like, so not as much morning riding happening. But some is better than none! Originally both days this past weekend were scheduled to be 100+ before a heat index (105 Saturday, don't even want to know what the "feels like" was!), but then Saturday morning when I looked again, the weather for Sunday was still hot, but more reasonable. I shot a quick text to TrainerB to see if I could haul to the interim farm for a lesson, but also acknowledging that it was SUPER last minute and I would totally understand if she didn't have any slots. But the stars aligned and she had a 9:45 lesson slot for me :) based on the drive to the farm it made for an EARLY morning but it at least let us finish up before the heat index hit triple digits! I went alone, so limited media and nothing under saddle (I almost asked her to film a bit at the end, I should have!), but it was really, really nice. Not that we worked on anything particularly hard or that we were particularly spectacular (lol), but it just felt so damn good to be out there doing the thing with my best bay mare. Especially poignant for me being seven weeks to the day from fracturing my ankle. I still have some occasional residual stiffness, and I'm certainly not out running any marathons on it, but it feels pretty good!

She was a super good girl, starting off nice and relaxed and just showing up to work. No shenanigans about wanting to canter the whole time (which we are still struggling with at home), but letting me really supple her into both reins and turning from my outside aids. Neither of us has a ton of stamina at the moment, so I was pretty wiped out by the end of the lesson (despite copious walk breaks and also starting electrolytes last week to see if that helps me deal with the heat better)

So, this is no longer me questioning whether or not we're back -- we're officially back! And I'm looking forward to the second half of show season, some fun stuff this fall (a girl's trail trip and hopefully using my Gifted grant!), and then I'll make lots of big plans for NEXT YEAR and the universe can continue to disappoint me in new and exciting ways hahaha.
Posted by TrainwreckInTeal at 5:30 AM