I'm starting to feel like the universe just.... doesn't want me to show 😑 shortly after I drafted and scheduled yesterday's post on my lunch break Monday, TrainerB texted me to give me a heads up that entries for the next recognized show were filling quickly, so if I wanted to enter I should probably do so ASAP. I already had an account on the site to do it so as soon as work wrapped up for the day I went ahead and submitted my entries. Then preordered a horse show package from the photographer, because YOLO 💸💸💸
Annnnnnd then an hour later I got an email from the show secretary that the show was full so they would be refunding my entries.... Womp womp. I'm on the wait list, but not hopeful. TrainerB and I discussed the option of me still coming as a non-compete and just taking three lessons while I'm up there, so that may be what I redirect to I'm just... Really bummed. I started the year with such high hopes about a show season and it's been sort of an unmitigated dumpster fire 🤣 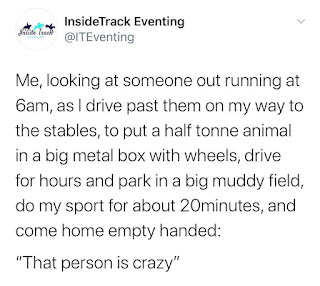 There aren't really any other show options this season unless I aim for the open show in conjunction with Regionals but I have the same concerns about that one that I had about Pony Cup - it's probably going to be a big show with a lot of atmosphere and it doesn't seem like a way to set us up for success at our second attempt showing recognized.
So currently I'm moping around annoyed at the world 🙃 at least at Pony Cup I *did* finally get to discuss a new barn timeline with TrainerB and we tossed some ideas around for me using my Gifted grant later this fall so obviously none of this is the end of the world I'm just... Miffed currently lol. First world problems, amirite?
Posted by TrainwreckInTeal at 5:00 AM