I wanted to write a post last night about all the trail riding I've accomplished this week (aka, conditioning for Ruby to maybe dabble in endurance). But while I spent the week riding, DH spent the week plotting to start his own goat herd. He built a pen, then a shelter. And then last night he dragged me to a goat auction. 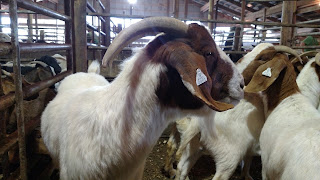 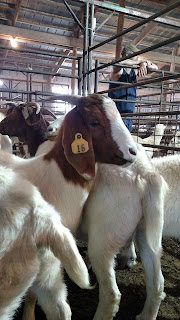 We ended up with two unregistered Boer (or high percentage Boer) females, around 3 years old -- which was the goal. It was my first time bidding on an animal by the pound at this auction, you should have heard us frantically doing calculations on the sidelines while we tried to stay under the financial limit I set, haha. We planned ahead and brought the horse trailer, and they loaded right up. They were dewormed, fly sprayed, had their hooves trimmed, and are now leisurely chewing on grass in their new pen! I haven't seen them in the daylight yet, so all you get is a crappy cell phone picture from my trailer, but I'm sure they will feature heavily in my IG posts (which is where I draw about half my media), so you'll be seeing more of them in the future! 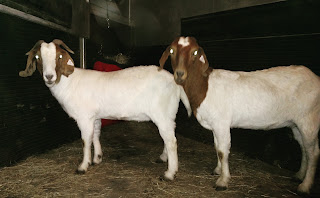