I had really good intentions to get up early and whipping through chores here so I could dash out to the barn and ride Ruby, but when I woke up everything was soggy and it was raining. Soooooo.... I didn't do that. No complaints from me, we needed the rain. And it gave me time to work on this half-finished draft that's been hanging out for a few weeks, so win-win!
I'm an impulse shopper -- that's not a secret. It's definitely worse when I'm stressed. Also not really a secret, haha. After Rolex, my friends and I have started referring to my binges as "life choices". Last month, life choices were made when C4 Belts had a BOGO sale.

In my defense, I've been wanting a C4 belt for a while now. I almost gave in to temptation earlier this year when they had a BOGO sale, but it was right before Rolex so I figured I should save my money. I also thought they might have some fun sales at Rolex, and I'd get a chance to actually see them up close. I was pretty disappointed by their "sale" at Rolex, but I did spend some time in the booth checking them out in terms of feel and the patterns, so I mentally added them to my list of things to buy at a future date. 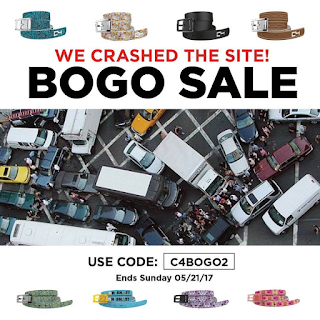 And then last month C4 had another BOGO sale, to make up for their website crashing during the previous one. So I started playing with their belt configuration tool and mixing and matching and seeing what I could come up with. Of course the first belt in my cart was the teal one (was there even a question?). And then I spotted a dachshund one. Duh. I kept scrolling through patterns and a few more caught my eye, so I figured why not? Had to meet the free shipping threshold, obviously!
I found myself more than a little frustrated with the C4 mobile site -- it was not at all easy to navigate and it was a total pain to try to figure out what was in my cart when I kept trying different combinations. At several points, I almost just said fuck it and didn't buy any belts, that's how frustrating it was.
After dithering for a while on patterns and buckles and choices and emptying and refilling my cart probably no less than 10 times, I finally decided to buy them. So I went through all the steps and submitted my payment. And then.....
I was more than a little worried when the charge went through on PayPal but I didn't get any kind of email confirmation (plus, you know, the crash page), so I dropped an email to C4 customer service just to verify that they received my order. I didn't expect to hear back right away, because I figured if I had the problem, everyone was probably also having the problem. I was pleasantly surprised to receive a reply within half an hour confirming my order -- customer service FTW!
So then all that was left was to wait for my belts to arrive. I spent that time grumbling at a friend who lives WAYYYY farther from the C4 shipping site than I do, and yet somehow received her belts 2 days ahead of me. Because that TOTALLY MAKES SENSE USPS. But I digress. 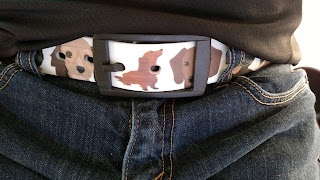 So the belts eventually arrived in their fun little boxes with their stickers -- exciting! Except then I had to cut them, and I'm alarmingly type A so I obsessed over that for a while. Finally I bit the bullet and cut the dachshund belt first, and the rest of the belts followed. I am super bad at ROOTD type photos and I never remember to have DH snap a pic of me wearing them, but I really love them! I have even been wearing them to work (usually just on casual Fridays haha). I was initially going to make this a "tack review" type post, since I haven't done one of those for a while, but I feel like I need more photos of them in action -- plus I want to abuse them a bit and see how they hold up. 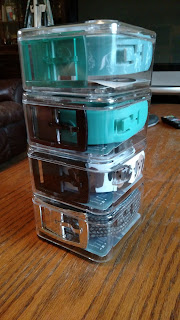 I know lots of bloggers out there have C4 belts -- what's your favorite pattern? How have you found their longevity? Do you like the custom aspects of the C4s (changeable buckles, one size cut to fit, etc), or do you prefer "normal" belts? Weigh in! 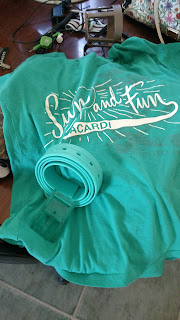