As some of you may have already seen, EventingSaddlebredStyle is making a pit stop on her very long drive west to hang out with me for an evening. I attempted to finagle a full day, but she's a busy lady with a tight schedule, so we will be cramming as much fun into that limited time as I can manage!
Knowing that she was coming and would definitely want to ride Ruby and possibly Cinna (depending on how much of a death wish she has? kidding!), I had good intentions of having them both reasonably back in work so they could show themselves in the best light. But ya'll know about how my best intentions work -- I haven't touched either of the horses this week (well, I lunged Ruby Monday?), so I'm sure they'll be maniacs. She'll probably take one look at my fire-breathing dragons and run screaming.... haha. Thankfully she has a hot horse herself, so I have no doubt that my dramatic Spanish mares will be amusing to her. 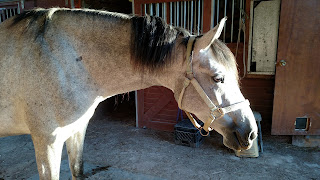 I could make excuses for why my horses have been so neglected, but really it's been hot AF and I've been prioritizing other things. Like, having my house look suitable for guests (or as suitable for guests as it can get when you have 2 humans and 6 dogs living in less than a thousand square feet, haha). And fulfilling my responsibilities as president of my GMO. Also writing an article aimed at publication in a west coast dressage magazine. And about a billion other tiny things. I finally broke down and made a paper list, and it's been alarmingly satisfying to check things off!
Thankfully today is supposed to be a little cooler than it's been most of the week, so I'll be taking off work a few hours early and hopefully we will do lots of playing with ponies! Then I will have something to write about and hopefully pictures for you ;) that is, assuming she's not an axe-murdering weirdo -- because that's always a risk you take when you agree to meet up with strange internet friends! haha
Posted by TrainwreckInTeal at 4:09 AM