I Need a Vacation Post-Vacation

Obviously I've been a bit MIA for the first half of this week -- and the reason is I had an absolutely fabulous time with my relatives from out of town. But fabulous is also synonymous with exhausting in this case, and I'm super wiped out. I actually sat down for a quick nap yesterday afternoon and ended up sleeping for almost 3 hours (which will surely wreak havoc on my sleep schedule in general haha). 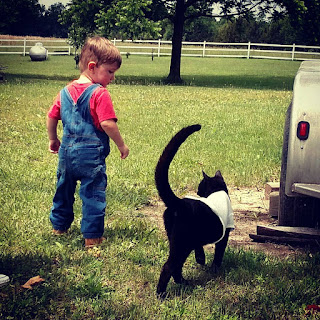 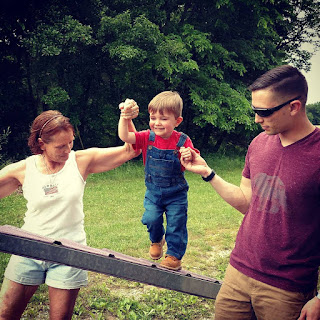 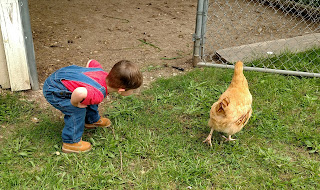 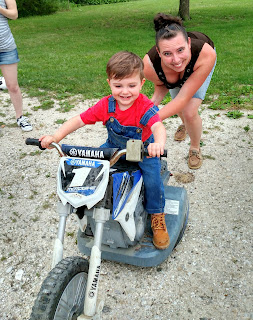 My mom's sister and husband flew out from Washington, and my brother and his wife/son also visited. I don't get to see this aunt/uncle frequently, but I always love spending time with them when I can. I also don't get to see my brother and his family very often (the last few times have been at funerals). My nephew is finally getting to an age (about 2.5 years old) where his personality is becoming more apparent and he is interacting with us, and my mom and I had so much fun playing with him and introducing him to all the farm animals. He loves the chickens (although he calls them all roosters, haha), and he also was super enamored with the goats. I think my favorite was when he got super intrigued by the horses (particularly Cinna!) -- he wanted to ride her, which obviously didn't happen, haha. He also loved the tractor, as long as it was turned off (too loud when it was running). We mostly left the dogs outside in their yard, but Indy did get to smooch him a bit and they had a ball together, lol. 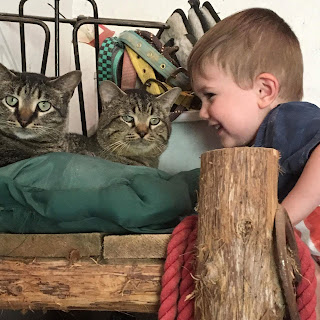 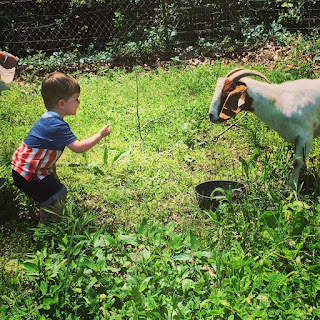 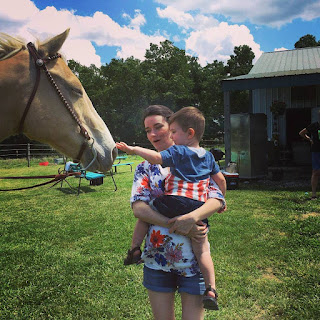 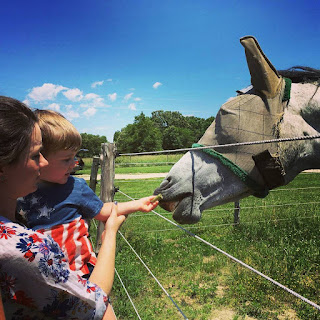 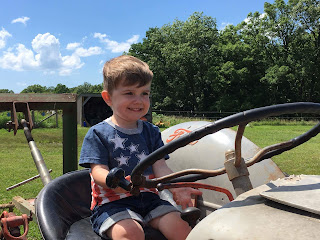 Monday we had a big smoke-out at our house, and my only interaction with the horses for basically the whole weekend was feeding them. Tuesday my mom, aunt and I did briefly hit the trails -- for convenience's sake, we just took the three horses from the house, because Cinna can always use the life experience. We went back to Rudolf Bennit and had a nice ride. The only down side was that Cinna buggered her face up in the trailer pretty good being an idiot when we were unloading -- we debated stopping by the vet's on the way home, but the final decision was that she'd probably rub out face stitches anyway (she gashed up right by her left eye), so we just brought her home and I've been doctoring her eye. Thankfully that appears to have been the right call, as it is healing up nicely with regular attention and 24/7 fly masks to keep the flies out of it. 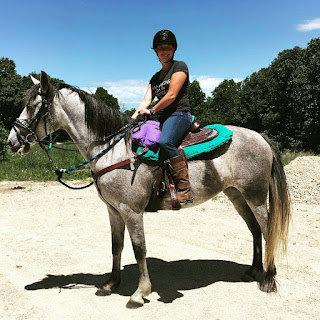 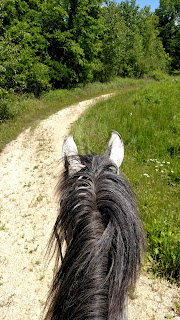 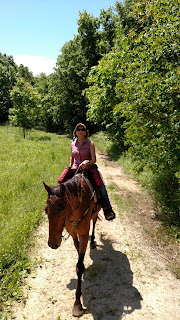 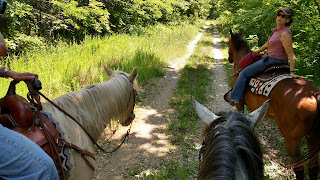 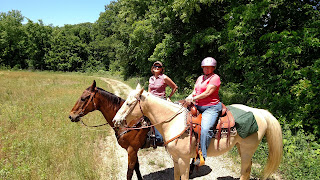 Aside from the gash and some leg scrapes, she was fantastic. She followed (although not necessarily quietly, lol), and led. She also crossed several creeks. For the first one, I got off (armed with a rope halter and lead, so she couldn't jump on me from a rein-length away), and she neatly tucked up her knees and hopped over.... don't get any ideas Cinna, I'm not jumping you... haha. The other 3 crossings she went across with varying amounts of grace -- basically she clung to Trigger and Jack like security blankets and pushed them across rather impolitely, but she's definitely making progress, so we'll keep working. Because my aunt has been out of the saddle about 8 years, we only rode for an hour, then came home and enjoyed a stop by the local tack store and then a delicious dinner out -- yum!
Yesterday my mom and DH went back to work, but I spent the morning with my aunt playing with clicker training with my mom's horse. He is going to be 8 this year, and is half-Andalusian, half QH. I got him for my mom and put some of the only training he has on him last spring, and he's basically been a pasture ornament ever since while my mom finishes painting her house (super frustrating for me, since he's SO athletic and smart and wants a job so badly). My aunt has a ton of experience with clicker training, and she brought my mom and I both some fun toys to play with. Initially Caly (mom's horse) was terrified of the clicker noise, but after a few short sessions (broken up with breaks where he could think about stuff), he was happily touching his "target" and taking his treats. He doesn't have a lot of life experience so I think giving him something to "do" will be great for his brain until my mom can start riding him. 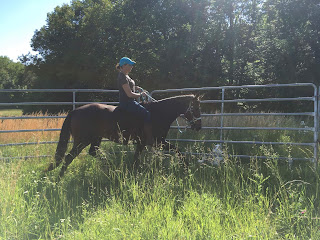 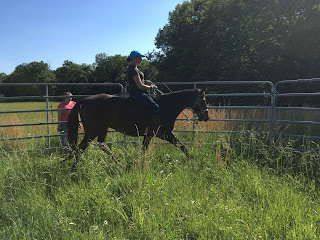 After my aunt and uncle headed back to the airport, I swung by the barn and got in a quick trail ride with Ruby. She was jiggy and head-tossy for the first 75% (I guess that's what happens when your average rides are once every two weeks, oops?) but she did finally settle down and we had some fun. It was hot and humid so she worked up a light sweat, and got to enjoy a bath and subsequent grass roll (I guess that's going to be a regular thing now!). Then I came home and crashed out, and tried to prepare to go back to reality! I guess I'm glad I only have today and tomorrow at work and then another weekend? I definitely need a vacation after my vacation... haha. I did finally catch up on everyone's blogs, looks like everyone had busy long weekends! 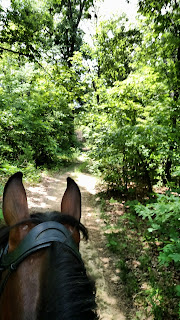 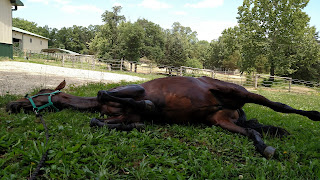 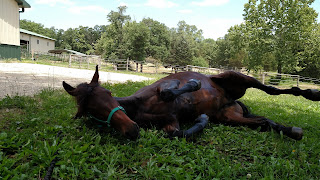 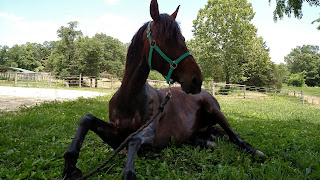 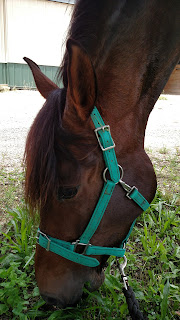