On the plus side, EventingSaddlebredStyle is definitely not an axe murderer! ;) she arrived safe and sound around the time I was feeding horses last night, so she came out to meet the boys and Cinna. While they ate, we got her settled in, and waited for the rest of the party to arrive -- Kaity was able to tweak her work schedule so she could hang out for a few hours, and DH surprised me by wanting to come out to the barn with us, so we had quite a crew!
We went out to ride Ruby first, while we still had daylight. While DH went out to grab Ruby from turnout, I got everybody squared away with waivers so they could ride. Ruby was mercifully clean, so I whisked a brush over her and we tacked up. She hasn't been ridden in... uhhh.... a while? (bad mom here). I climbed on first and put her through her paces to make sure she wasn't going to be a complete and utter lunatic, then gave everybody else a turn! 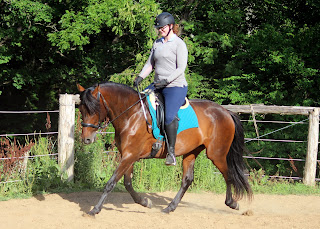 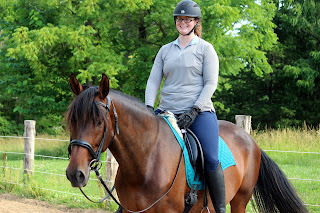 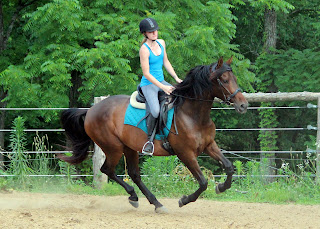 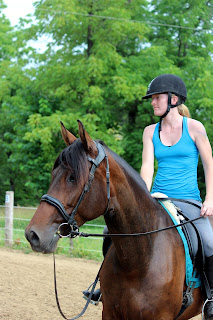 I'll let them write up their own posts about their impressions, but I was proud of Ruby for being game for three riders while being woefully out of shape. It was muggy and gross so she worked up a sweat, so after a quick hose down and graze, we headed back to the house. I made some spaghetti that was hopefully edible, and then we enjoyed some delicious turtle pie (impulse purchase when I was buying stuff for dinner, because who can resist caramel and pecan and chocolate? Yum!).
Tragically Kaity had to leave for work, and at this point we were losing the light. Luckily, this gave me the perfect excuse to test out the new lights -- by actually working under them! I haven't gotten a light installed over my cross ties yet (adding that to my to-do list), but we had enough daylight left that I could see enough for a quick grooming and tacking. Cinna hasn't been ridden in a while, and hadn't worked at all this week, so I tossed her out on the lunge to get used to the lights. She came out a little sassy (not unusual), but settled in quickly and was soon working all over the arena. She didn't seem super concerned about the lights, so I climbed on. She did have a minor meltdown over one corner, because the ladder was resting outside the fence, and clearly it was an alien spacecraft sent to abduct her -- she did eventually calm down (although I had DH move the ladder), and she worked pretty well. We had some giraffing and tension, but we also had some moments of relaxation where she let me direct her energy. She was a little sassy on her right lead canter depart, and she thought about being naughty a few times, but overall she was pretty cooperative.
So I let Teresa have a turn! Again, I won't spoil her fun and I'll let her write her own post about what she thought of my dramatic baby horse, but I will say it was really fun watching her ride Cinna -- I'm the only one who has ever been on her, so I never get to actually watch her go under saddle. Cinna is way more similar to Stinker than Ruby is, so I imagine Teresa felt right at home. There were some llama moments (Cinna seemed utterly confused to see me standing in the middle of the arena while someone else sat on her), but there were also some moments of nice, soft relaxed work. We kept the ride pretty short, but I'm glad I finally got a chance to test out the lights and share my dramatic Spanish mares with blogger friends! 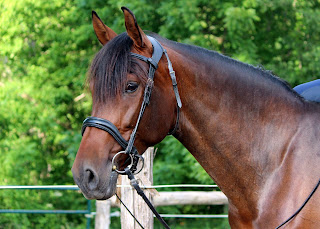 After we came back inside and cooled off, we enjoyed more dessert (she brought me Heath bar cookies that are basically like CRACK), and gabbed about horses for a while. I wish we could have stayed up all night talking, but she had another long day of driving ahead of her today, so we eventually crashed. It was an early morning for all of us, but I got chores done before a brief rainstorm blew in. After caffeinating and a few more dachshund snuggles (Cici was particularly obsessed with her!), Teresa got safely on the road for the next leg of her journey. So now that I've sorted through photos and written this (semi-coherent?) update, I better get to work!
One of the best thing about this weird blogging journey I've embarked on is 'meeting' all these people virtually, and then getting to hang out with them in real life. Strange internet friends are the best friends, especially when they become IRL friends! :)

Posted by TrainwreckInTeal at 6:02 AM