I finally did get a chance this weekend to ride my horses, and I wish I was super excited to blog about that… but I’m just kind of uninspired at the moment. Maybe I’ll get inspired if I just start writing? Let's try it and see.
I will give a public shoutout to Mother Nature for the awesome weather we have been having for the last few days (and hopefully will keep having haha). We had a bit of rain last Thursday that brought the temps down, and mercifully they’ve stayed down. I spend plenty of time bitching about it when it’s hot so I should probably devote equal time to nice weather, right? So here I am, telling you how NICE our weather was this weekend!
Friday night I had to grab groceries on my way home and I was frustrated because I wanted to finish mowing the back pasture so I could also drag the arena (once the brushhog is hooked up we have to do alllllll the mowing because getting it on and off the tractor is a BITCH), but I really wanted the arena dragged so I could take advantage of the beautiful weather in the forecast. When I got home I was pleasantly surprised to find DH already out on the tractor mowing ❤ so I made sure I got all the other chores done (and took him a beer!). I gave him a shoutout on my FB page, but here’s another one for those of you not on the ‘Book. He worked an 11 hour work day, spent two hours driving, another two on the tractor mowing, and then dragged the arena. Best. Husband. Ever.
Saturday I was up bright and early to knock out chores and some errands. Then a friend came over to keep me company (Cinna still has not achieved the level of trust necessary for me to ride at home alone when no one will be back for hours lol) and we tacked Cinna and Trigger up to tool around in the arena a little bit. Cinna hasn’t actually been saddled and ridden for…. a while? But she was shockingly good when I just hopped on without lunging and went right to work. We did a little bit of W/T/C – she was a little “sticky” about leaving Trigger to work on the other side of the arena, and I lamented not thinking to grab my whip. I let her be done once we had gotten a few decent circles at each gait both ways -- and by be done, I mean we hit the trail!
Cinna led the way for most of the ride (she did have a freeze and snort moment at the rubber mat on the trail…. you know, the one that’s been there every single time we’ve GONE on the trail). It was the first time my friend had been on my little trail, and she had some nice comments about it that I relayed to DH when he got home that night, because he’s the one who put it in for me :) we looped back and forth a few times, since it’s pretty short, and had a really nice time! Cinna did have one minor spaz out moment where I thought maybe she had snagged a branch in her tail or something, she got very goosy for about 30 seconds, but she eventually walked out of it. 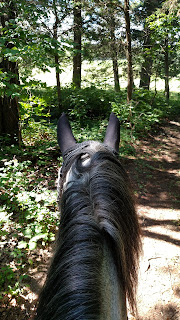 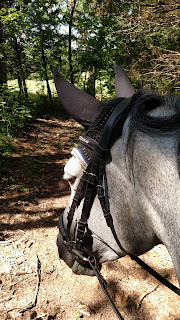 Thankfully since the weather was so beautiful, the horses didn’t work up too much of a sweat, but we hosed them off anyway and parked them back in their stalls in front of fans for the rest of the day. We hung out and chit chatted for a bit, then I grabbed some lunch and a super quick nap before heading out to the barn do ride Ruby and do chores! I was totally on a mission Saturday – the horses have been losing a lot of “clothing” in turnout, so I wanted to ride all over it and see what sorts of treasures I could recover. In the first five minutes I found a missing shoe, so I was feeling pretty confident in my ability to recover a bunch of lost items. 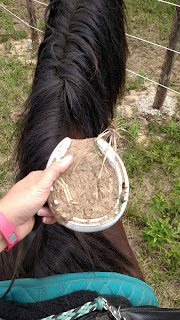 Except I rode for another hour and didn’t find a damn thing…. haha. We did hack all over the perimeter fence and criss-cross the turnout, then hacked out along the road to look in the big pasture for more items, but no dice. Ruby was a total rockstar about the traffic and me getting on and off while trying to juggle holding the shoe, my phone, and the reins haha. After detouring by the barn so I could toss the shoe in a safe location, I went over to the mowed section that is functioning as our outdoor riding space for the moment and did a little W/T/C – Ruby is going on a field trip soon and I kind of wanted to make sure we still had functional buttons. Which we sort of do. But I definitely need to start riding more (story of my life). 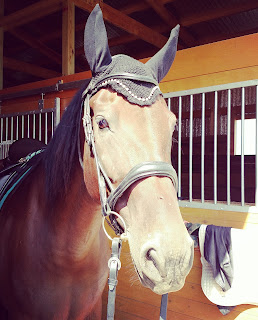 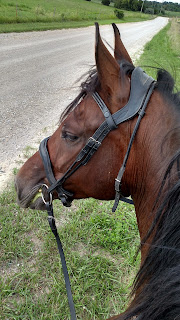 Sunday we knocked out some projects around the house (including putting up some fun decorative lights on the tack shed) before hanging out with some friends for a rocking BBQ! We also had a houseguest on Sunday necessitating some cleaning, so I had limited horse time.
Monday was a long day at work and knocking out other errands (including dropped off my Kastel dresses to hopefully be shortened into wearable shirts?), plus also my awesome new Kensington screens arrived. That necessitated a frantic trip to the hardware store, but tragically I live in the boonies so I ended up having to order the mounting hardware online. Which greatly annoyed me. So hopefully it arrives sometime this week so DH can get the awesome screens mounted before my next big pony adventure!
At any rate -- the weather looks good for most of this week, so hopefully I can get in some more good works with the horses! (I was gonna call them ponies, but I'm trying not to do that anymore Alli, haha). And by good, I mean less than a billion degrees. So yay!
Posted by TrainwreckInTeal at 7:00 AM