So I don't think I went into too much detail on the blog, but we've been experiencing a series of unfortunate events with our diesel. I know I mentioned the original brake issue, and that we had already scheduled some front end work so it was going to be out of commission for a hot minute anyway. All of this happened in July, but I wasn't super worried because I didn't have plans that involved the trailer until mid-August, and surely everything would be squared away by then -- right?
Hahahahaha. Cue Murphy's Law. So our fabulous mechanic got the front end work sorted out, so all that we needed was a front end alignment (which had to be done at an actual shop, vs our front yard). So we dropped it off two weeks ago expecting to pick it up that evening. After the alignment, it was still doing a little bit of "wandering", so he crawled back under to see what was going on. Apparently some sort of very important box was missing -- a box that stabilized the steering. The brackets were there, but the box was not. Fantastic, right? Since it was already at the shop, we told him to go ahead and order it and put it on -- at this point we still had like 3 weeks before my trip so I wasn't super concerned.
So a day or so later, the box arrived and got installed. Yay, truck is good to go. Right? I'm sure you can see where this is going, lol. Mechanic took it out for one more drive to test the steering stabilizer, and all was well. Until the clutch pedal broke. Fun fact about the actual clutch pedal -- kind of hard to buy alone. Locally, our auto parts store only sold it in conjunction with the gas and brake pedals, which I didn't need. Our normal online auto parts store was similar. And at this point, we had definitely blown the parts budget out of the water (which ultimately wasn't THAT big of a deal, but I also didn't want to spend 3x more than I had to on this stupid pedal).
So we found an eBay seller (a Ford dealer out of Ohio incidentally) and purchased one. Shipping was going to take a week, and at that point I was getting a little nervous. Luckily, it arrived a bit ahead of schedule, so we got it down to the mechanic and crossed our fingers. He was able to get it installed, and we picked it back up Friday. So fun fact about replacing the clutch pedal in an almost 20-year old standard truck -- that new clutch pedal is going to make it drive like a totally different truck. 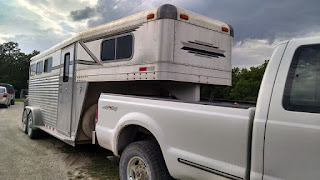 We bought this truck before I started blogging, so it isn't chronicled online, but my friends know exactly how much I hate driving a standard. Like hate. Particularly this truck -- it was SUPER hard to learn on. So the year we bought it, I made myself drive ALL. THE. TIME. And I got pretty decent at it. And by pretty decent, I mean I went from killing it 10x every time I drove it to killing it like once every few months. Instead of feeling a deep pit of anxiety in my stomach thinking about driving it, I started picking it for my trips to town. It got to feel comfortable, like a broken in pair of boots. 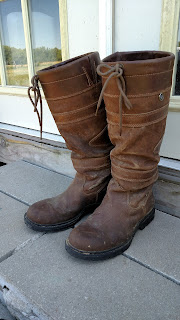 And then came the new clutch pedal. Ack. I drove it home from the mechanic last week and I'm not gonna lie. There was a lot of swearing on the struggle bus... haha. So I drove it again the next day to the feed store. And again to town. And to the barn. And I'm hopefully working through the pain of breaking in a new pair of boots -- because this truck is gonna be around for a while, and I've got to feel comfortable driving it :)
Posted by TrainwreckInTeal at 5:00 AM