I had good intentions (don't I always?) of finishing up my second post about the trails at Von Holten Ranch over the weekend to run yesterday. Obviously that didn't happen, haha. Hopefully later this week! My weekend was a bit off kilter because DH had to put in unexpectedly long hours at work because our local sheriff's department let an inmate escape -- super fun. But I digress. At any rate, my day yesterday was spent in a much more fun manner -- watching the solar eclipse!
My little corner of the boondocks just so happened to be in the path of totality. Because Missouri was expecting more than a million out of town visitors, both DH and I ended up with the day off (well, Mondays is normally his day off, but recently he's been working them, so it was nice for him to get time off). My mom is also off on Mondays, so we decided to watch the eclipse from the sandbar. My mom's friend drove out from St. Louis with a jet ski (our boat isn't really designed for more than 3 people), we loaded up multiple coolers, and took off! 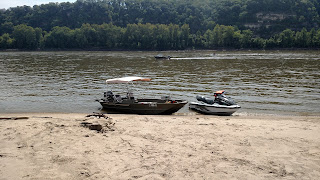 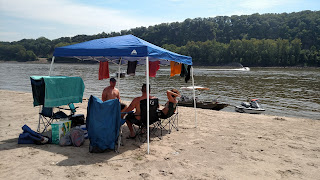 I was a little worried about traffic (because that's all the news had been talking about for DAYS), but luckily where we were heading was out of the way. The boat ramp parking lot was full of eclipse watchers, which was actually a bit annoying, because it was kind of complicated to put the boat in the water with that many people milling around with their cars parked in the way, but we managed, and then we set off! DH was also worried that the sandbar might be crowded, but thankfully, it wasn't too bad. We set up a canopy and a grill, and just vegged out in the sun. 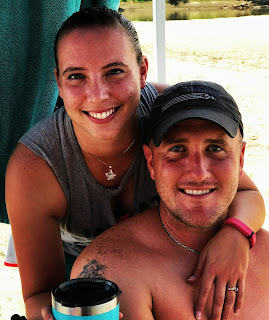 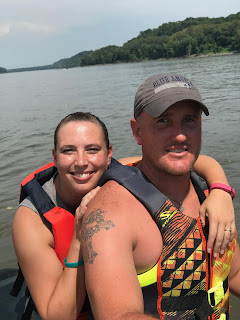 Everyone else had the same idea (although no one else had a canopy, haha), and so we hung out and chatted with people and petted lots of super cute dogs. One of these days we'll manage to bring a teeny dog to the river -- gotta test out that cute lil' life jacket I got! The eclipse started around 11:40 or so and and the totality was at like 1:20 (and then obviously it kept going until like close to 3 but nobody cared about that portion, haha). We all had eclipse glasses, and it was super cool to check the progress every 10 minutes or so. We all tried with varying degrees of success to get photos, but obviously as seen above, mine sucked.
The actual moment of totality was so insane -- it got dark enough to see stars, the temperature dropped, and it was eerily quiet. I really am disappointed none of my pics turned out, because it was such an experience to see the sun blotted out by the moon, with just edges of light trying to peek around. But alas, it was over too soon, and the world came back to life. 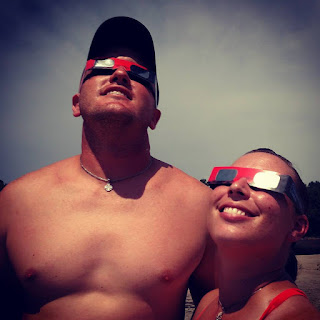 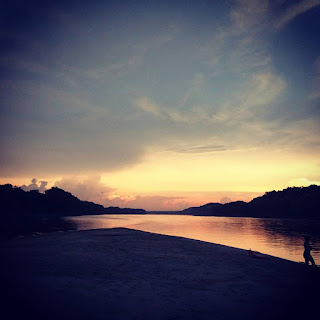 We tossed our food on the BBQ, and finished up a relaxing afternoon. DH and I got to take some turns on the jet ski (which of course led to him frantically shopping on Craiglist last night, so we'll see how that goes). Despite regular application of sunscreen we all got a little bit of color. Finally it was time to pack it up and head in for the evening. 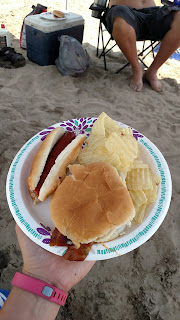 When we got home, all the animals seemed fine -- no one went blind from staring at the eclipse ;) hahaha. So enjoy this recounting of my non-horsey day on my horsey blog. Sorry not sorry!
Posted by TrainwreckInTeal at 5:01 AM