Whew okay. I need to force myself to get back in the blogging groove. Quick summation of basically the last two weeks. Water line got replaced so I finally have a functional hydrant in my barn, meaning I don't have to murder my back bucketing water everywhere (yay!).
One night last week (Wednesday? Thursday? They all run together, IDK), I tossed riding clothes in my car and stopped to ride Ruby after work. I tested the teal fly mask as an over-the-bridle addition and it worked super well -- she didn't even seem to notice it. So I think that'll definitely be added to our trail riding toolbox any time I think there might be spiderwebs. 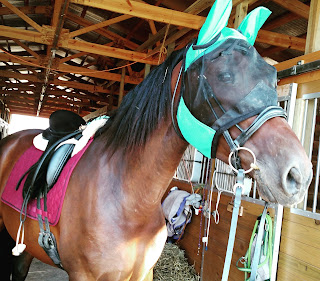 I hacked her out next to the road to warm up, then went back to the area that's serving as the outdoor arena. On our way back, the pasture horses were being a bit snorty and Ruby got excited. I attempted to navigate her around a plastic soda bottle on the ground, and she ignored me, resulting in her stepping on it with not just her front, but also a hind foot. Obviously this was the SCARIEST THING EVER and she actually dropped her head and started crowhopping and popped me out of the tack. Thankfully I was able to reel her in pretty quickly, so no harm done, and we ended up having a really nice schooling session. 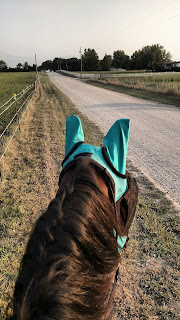 I had a nice holiday weekend split between horsey and non-horsey activities. Saturday and Sunday were both extremely hot, and Sunday we took the boat out with quite a few friends. It was a bit of a comedy of errors -- the day started with DH launching the boat and then belatedly realizing he forgot the keys on the kitchen table (half an hour away). He also managed to lose both his sunglasses and the grate to the grill in the water (although Kaity saved the day and recovered the sunglasses, haha). The last catastrophe of the day was DH dropping my truck keys IN the river, never to be seen again. I'm still quite angry about that, as I got those keys when I bought the truck 10 years ago, and I have never in my life lost a set of keys. Ever. Ugh. 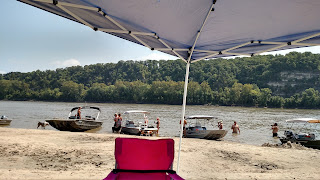 After driving home, locating a spare, and sending my mom back down to the river to retrieve the boys, Kaity and I attempted to decompress by doing some trail riding at my house. I say attempted, because apparently the horses were not fully on board with that plan. They were fine to tack up, but when I got off to open the back pasture gate, Cinna bolted when I tried to re-mount, and Trigger was also being quite a turd (for him anyway). In their defense, it was super muggy, the horseflies were WRETCHED, and there was some sort of animal in the woods making very weird noises. But we soldiered on! Eventually they both calmed down and played nice, although Cinna was absolutely drenched in sweat. Probably not the relaxing excursion I promised Kaity, but hopefully she had a good time... haha. I owe her a real trail ride at Rudolf Bennit now though! 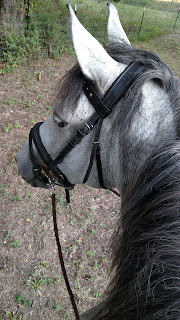 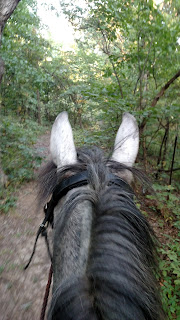 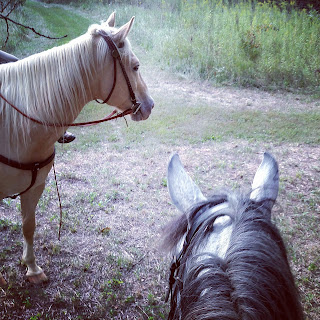 Monday I thought DH's plan was to go back on the river, so I decided to have a spa day for the horses and do some tack cleaning. Both girls and Trigger have been rubbing their tails for no reason that I can sort out, so I wanted to wash everybody and try some dry skin shampoo, in case that was the issue. I started down at the barn and worked Ruby before sudsing her from head to tail, then cleaning tack while she dried. She was a good sport for everything, as usual, and looked pretty stunning when I got done (I'm not biased or anything). My tack was SUPER grungy (I should have done before/after photos, lol), but it was quite relaxing sitting in the aisle scrubbing away. All I needed was some company and it would have been very Saddle Club-esque!
My day took a mild detour when I attempted to drive home from the barn -- my diesel has been a little difficult to start the last few times I've drive it, although I chalked it up to the chilly(er) mornings we've been having. Unfortunately that was not the issue, as when I went to leave the barn (at about 90 degrees), the truck refused to start. Thankfully DH's plans had changed and he was not out on the river, because I needed him to come give me a jump (times when its super convenient living a mile from the barn!) and then we had to take the two batteries into town and try to exchange them under our warranty. At home the batteries were testing bad, but upon testing at the store, they seemed fine. So we had to take them back home, put them back in the truck, and then spend an hour checking various fuses and trying to figure out if something was draining power from them. After no real answers (but a lot of sweat and swearing), the truck started just fine? Ugh. Vehicles guys. 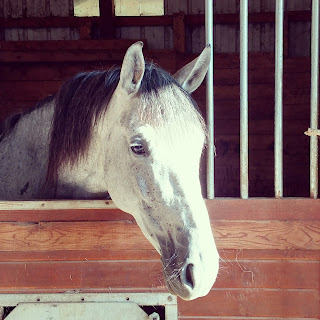 That ate up more of my day than I wanted, but I still managed to pull Cinna and Trigger out and scrub tails (although they didn't get full baths, blah). I haven't noticed quite as much rubbing (although there's still some going on, dammit), so hopefully the dandruff shampoo helped.
This week I returned to normal work hours -- this should give me a little more time to ride in the evenings, but it also means getting up earlier to get chores done. I'm solidly back to doing chores by the light of a headlamp, which I hate :( boo. However it was quite fun to get home, get horses turned out and change, and be back to the barn by 5:15 to work Ruby last night! I got done and home at a decent hour, I'd forgotten what that's like ;)
At any rate, September and October are shaping up to be busy months -- my GMO is putting on our fall schooling show next weekend, and while I'm not showing, I'll be there photographing and helping out. A few weeks after that is a Centered Riding clinic (again, not riding, just auditing). We are also expecting the goats to kid in October, although none of my photos really adequately capture how very pregnant the goats look.... lol. I'm a bit in denial about how quickly this year is slipping away -- I can't believe it's fall already!
Posted by TrainwreckInTeal at 5:30 AM