Obviously with my absence, it's fairly easy to guess that my life got busy and blogging (as always) took a backseat.
Our juvenile male goat is still touch-and-go -- despite working closely with the University vets to develop a multi-product dewormer protocol based on his fecal egg count and following their instructions to the letter, he is still incredibly wormy and sick, so they finally pulled out the big guns medication-wise Wednesday. Jury is out on whether or not that will be enough to turn the tide -- he has been a pretty sick goat this week. I'm trying to steel my heart to the possibility that we might lose him. For as much as I bitch to DH about the goats being "his", I'm the one who handles 90% of their care, and I'm the only one Sam (the goat) would eat for this week. If we lose him, it'll be hard.
We also had a scare with one of the babies last Sunday -- she went missing and we assumed the worst (we have a terrible predator problem). Thankfully she turned up, but it was a rough half hour of thinking that we are the worst animal caretakers ever and should probably just sell everything off and move to the suburbs. (although side note, my dad called during all the hysteria and I told him what was going on -- we've been making "kid" jokes since they were born, and apparently that morning when he went to church, he asked his pastor to pray for his daughter because she had 3 kids on Friday and one was missing. I'm assuming the pastor knows my dad well enough to know that was a joke, but once all the dust had settled, I did get a good giggle out of that.)
Things have moved firmly into manic at work as well -- I work in the health insurance industry and our open enrollment period starts Sunday. Last minute fires to put out, problems to solve, and mistakes being found and hopefully corrected. Of course 10 minutes before I walked out the door yesterday I got an email that wrecked my whole day. Then I came home to hook my truck up to the trailer for the clinic this weekend to find that it wouldn't start.... hooray! So my evening last night was spent frantically making contingency plans for truck/trailer combinations and hoping that SOMETHING would work out.
I did manage to swing by the barn and see my horse yesterday -- I was in flip flops, so wasn't planning to ride, but BM was kind enough to loan me some socks and my tall boots managed to zip over my jeans, so I did climb on Ruby for a bareback hack to try to calm my brain down a bit. She was her usual perfect self. DH's work schedule hasn't been the same two weeks in a row for like the last 3 months, so I'm juggling that mania as well (he had to be at work at 1:30 am today and works through 4 pm, so you can imagine what kind of fun that's wreaking on.... well, everything?). 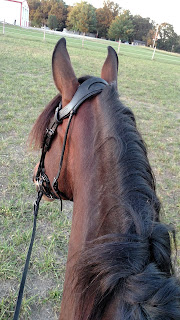 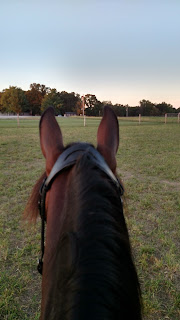 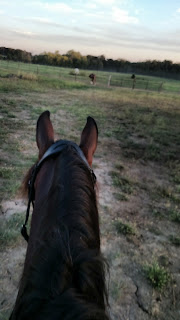 My phone is also on it's last legs and fritzing the eff out on the regular, but a new one should arrive today. Incidentally, blogger shoutout to Nicole who gave me some pretty solid phone suggestions when I griped about the shitty pictures my current phone takes, and my complete and utter disdain for the phone company's new programs where you "lease" a phone for like 3 years and pay a monthly fee.... haha. I ended up buying a phone she suggested as a possibility (after copious obsessing and comparison reviews obvs) so hopefully I love it. Although at this point I'll love anything with a screen that doesn't embed glass shards in my fingers when I try to use it, or shut off randomly and refuse to turn back on. #firstworldproblems
Basically, life is... LIFE. But I'm very much looking forward to auditing the Centered Riding clinic my GMO is hosting this weekend, and hopefully that will give me some much needed content and media to write about ;) in the meantime, thanks for hanging out with me through all the good and the bad, through the times where I write and give you fun photos, and the times where I drop off the radar for days at a time. Even when I'm not keeping up with posts, I'm lurking and reading and trying desperately to keep up with everyone's lives, trials, tribulations, and success stories!
Posted by TrainwreckInTeal at 5:00 AM