Hey, do you know what today is? Wednesday! The week is half over! Thank God, cause it's been a doozy already.... ugh. Thankfully, after my super fun chill day Saturday with Tanya, Sunday was equally as relaxed -- my brother, wife, and two nephews came out to BBQ for lunch and to let my older nephew Jack meet the baby goats! (my younger nephew is only a few months old, so he didn't care so much about them, haha). Despite the weather being absolutely disgusting (drizzly and cold after Saturday's sunny and 80), DH set up a nice little area in the barn away from the wind and we used our propane heater, which actually kept things fairly pleasant! I won't spam you with kid pictures (because personally I find that super boring, even if I like the kid, which I usually don't, lol), but I will share this one adorable shot of him feeding Cinna a carrot. She was SO GENTLE taking it from him -- he's a bit too young to really grasp the "flat hands" thing but she was so cautious and didn't nip any of his little fingers. I have it on good authority that during his evening prayers, he specifically thanked God for both horses and goats ;) although not for his awesome aunt who is going to teach him to ride as soon as he's a little bigger? Huh.... weird..... haha. 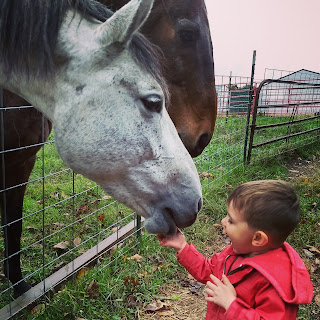 Monday I had an off-kilter sort of day at work, so I was very much looking forward to getting out to the barn to ride. I zipped home, changed, and had just walked into the barn aisle when DH called and asked if I was almost done..... *cue much annoyance and mood change haha* he spent most of the day painting at my mom's house and she was going to take us out to dinner. I grumpily tacked up and just spend half an hour working on bend at the walk and trot in the indoor -- I'm holding off on canter for a bit until I feel like she's a little more fit, as I think some of our right lead canter depart issues are fitness related (I'm sure the majority of it is due to me being an unbalanced sack of potatoes, but it will only help us both if she's more fit when I go to work on it). Because I was frustrated (with my husband, not with Ruby), I ended up not taking any photos..... if you didn't document the ride for social media, did it even happen? It was too muddy from the weekend's rain to ride outside, which also annoyed me. Basically, I had a nasty case of the Monday blahs.
Tuesday was another rough day at work. Thankfully, while it was grossly cool, it was also very windy -- drying out the field enough that I could ride outside when I got home. We took advantage of the poles set up again (several girls are going to a big world show soon, so the trail course is semi-permanent until they leave), but Ruby remembered our "canter after we finish the poles" and got a bit strong coming out the first few times. To the right she's gotten very bracey and tends to fall in on the circle very badly, so I was struggling to keep her between the aids and moving from my inside leg into my outside rein. So every time she started to fall in, I asked for a downward transition and then immediately to leg yield out. Then we'd pick up the trot until she fell in again, and rinse, repeat. It only took about one big lap of the field before she remembered that she could in fact move off my leg at the trot as well as the walk -- funny how that works, right? :) we ended on a good note, and then I made her try on a baroque bridle for a fun scheme I'm working on. She was unsure about the curb bit, but game to try for me! Love her. 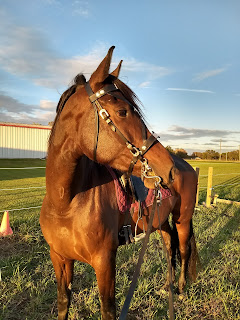 The ring got dragged at home, so maybe tonight will be Cinna's turn! Or maybe I'll get SUPER MOTIVATED and ride Ruby, then come home and work Cinna under lights! Has fall arrived in earnest where you are? Are you dealing with trying to squeeze in rides in the ever-shortening daylight hours?
Posted by TrainwreckInTeal at 4:30 AM