I am late as heck with this, but oh well. That’s life! Let’s start with the details – my local GMO hosted a Centered Riding clinic with Carol O’Donnell Wilson a few weeks ago. We tried to have her out in May, but ended up having trouble filling all the slots in the original date, so we postponed it a bit, which ended up working out pretty well! I didn’t sign up to ride, mostly because of my lack of saddle time lately (also apparently money is a thing?). I did however audit, and I ended up bringing up my trusty “husband horse” Trigger for some clinic participants who lacked a horse to ride. 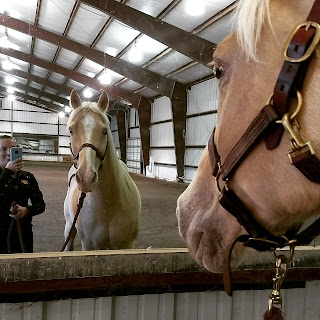 One of the riders was local, so he had a chance to come out and “test ride” Trigger a few times prior to the clinic to make sure they got along okay. The other was from a few hours away, so her options were pretty much to just show up at the clinic and ride, and trust that things would work out! Luckily Trigger is basically the most laid-back soul on the face of the planet, so it was fine. Well, fine-ish. He did test both of them by pretending he didn’t know how to steer, but since both of their lessons were both conducted in the walk, the worst he could do was walk a direction they didn’t want. And by the end of the clinic, both of them had him going quite nicely. 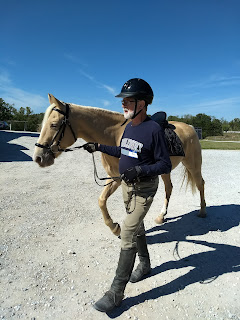 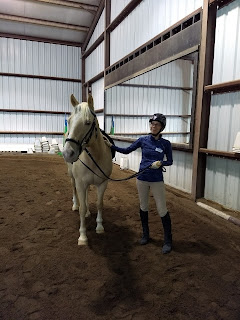 But I’m getting ahead of myself, let’s go back to the beginning – both days of the clinic started with an unmounted discussion/lecture session (I say discussion because there was definitely some back and forth between Carol and the participants, so we were listening and participating in an engaged fashion!). She started out with some information about what Centered Riding is, and how it can be a multi-disciplinary tool to assist riders in all walks of life (we had participants ranging in age from 16-79 with backgrounds including saddle seat, western, dressage, and jumping riding Saddlebreds, stock horses, warmbloods, and ponies). *disclaimer: any misunderstanding of Centered Riding concepts can be blamed solely on me* She summed up Centered Riding in a single statement: Centered Riding is becoming aware of what’s in your mind, how that affects your body, and how your body affects your horse.

She spoke a little bit about Sally Swift and the two books she’s published on Centered Riding (I’m actually like 90% sure I own one, so I need to dig around haha), and then we moved into talking about “the critic”. You know “the critic” – we all have one. It’s that little voice in our head saying we look dumb or don’t know how to ride or are screwing up our horses. As someone who struggles with being a little Type A (or a lot Type A, shut up, okay?), it was a really fascinating topic for me. Carol told us to send our critic on vacation (preferably somewhere nice, so they’d never want to come back), and work on changing our mental approach. I think one of the most important takeaways I got from auditing the clinic was that when your critic is present, it gets in the way of your learning. If you’re spending all your mental energy beating yourself up for not being good enough, that doesn’t leave much room to focus on learning how to get better – and isn’t that the point? Always striving to learn and improve?
From there we moved into the basic principles of Centered Riding (in no specific order):
• Breathing (I have a lot of notes scribbled next to this but none of them are making sense two weeks later, oops? Except maybe one that says “exhale! Audibly”)
• Building Blocks: Carol passed around a really neat illustrated diagram breaking the parts of the body down into blocks and showing how stacking them “correctly” put the rider in balance.
• Soft Eyes: literally the hardest concept (but most useful!) for me ever. I am a confirmed “hard eyes” starer when I get focused on something, so working on softening my gaze is actually something I’ve done every ride since this clinic!
• Centering: this is where she lost me a little bit. This is a big part of Centered Riding and it involves visualizing a little spinning ball in your lower torso and focusing the energy there.
Another mental image that was useful for me was to treat your pelvis like it was a bowl full of water – if you tipped too forward or too far back, the water would spill. Focusing on keeping the “bowl” of your pelvis level made me think a lot harder about how I was sitting. I also practiced this one on Ruby the next few times I rode.
Other little notes that I probably can’t flesh out into an entire paragraph, but that I found interesting enough to jot down: A relaxed horse is a thinking horse (LOVED this). Ride your bones, not your muscles, and “allow” your body to work. Sometimes it’s beneficial to try what doesn’t work (hard eyes) and gradually segue into what does work to see how the horse reacts (this was really interesting to watch during the mounted portion of the clinic). Riding is a feeling sport. She also touched on the Alexander Technique and how first you had to have an awareness of a habit, pause, and then you could make a change.
I didn’t take many notes during the mounted sessions because I was snapping some photos, but it was really fun to watch the changes from the beginning to the end of each session. And most of the riders came back for day two, which was even more informative! I was going to do both recaps at once but this was only one page of notes, and day two was another page, so I figured I would break this up so I don’t bore you to death haha. Stay tuned for my takeaways from day two!
Posted by TrainwreckInTeal at 6:30 AM