Well in this case, the radio silence is for a fun reason – I’ve actually had a chance to ride this week! Multiple times even

Ruby was not amused… haha. But making it to the barn to ride in the evenings also means I have no computer time to format and schedule posts, hence the quiet.
Tuesday we rode mostly in the indoor. After a lengthy loose rein (or maybe no rein, because I was on my phone multi-tasking by answering emails, haha) warm up, we got right to work. Knowing that I have a lot less riding time, I’ve gotten more purposeful about the work we’re doing when I can squeeze in a ride. Tuesday we worked on a lot of changes in bend – serpentines, circles, diagonals, teardrop shapes, and quarterlines. There was plenty of giraffeing (because OMG WORK), some counterbend (since that is my specialty apparently), and some tension – but there were also many moments of pleasant work. We worked a little bit at the canter, but mostly just focused on lots of trotting. Nothing groundbreaking, but I feel like we’re taking baby steps at getting back into regular work and maybe ready for some lessons again. Maybe? Shhh, let's not jinx it. 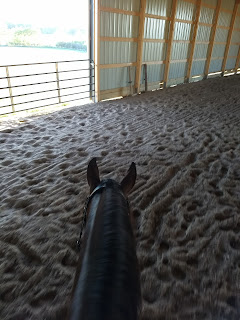 Wednesday I was determined to ride again, and I got down to the barn early enough that I rode outside instead. We have several girls heading off for Color Breed Congress next month, so there was a pretty intricate pattern of poles and obstacles set up in the field, which I had a lot of fun with. Using some of the poles and not others gave me a chance to sneak in some lateral work, and I played with asking for canter transitions right after we got through the poles and got some shockingly lovely upward transitions (and some that were less lovely, lol). This was also the ride that made me realize our right lead canter transition is kind of MIA. In the indoor, the arena is small enough that she kind of has to pick up the correct lead, but out in the field… ummmm less so. So, clearly I know what we’ll be working on for a while.
Towards the end of the ride I just rode big easy laps around the field at the trot, and whenever we were in a good place, I’d ask for canter, canter 10 strides, and then go back to trot. Over and over again. To the left, the canter work was excellent, and the trot was so-so. To the right, the trot was great, and the canter was… nothing to write home about (minus one super lovely transition using the poles that led to 10 strides of nice floaty canter that I couldn’t replicate again, oops). Not only did Ruby actually work up a sweat, but I had to clean green foam off her boots, bonnet, and my breeches (I’m not going to ponder too hard how she managed to get foam in all those locations haha). We were finishing up about the time some big machinery came in to work on the water line, so we hung out to watch it for a minute (I’m all about the desensitization). I debated hosing her off, but the temps were dropping into the chilly range, so I just gave her a good scrubbing with my cactus cloth, make her stretch for her cookies, and settled her back into her stall.
I was really hoping to ride Cinna last night (and take advantage of the beautiful weather!), but we had to go pick DH's car up from the shop -- where it was unceremoniously towed earlier this week when it refused to start. Adulting is stupid expensive, and I would like to not. Can that be arranged?
Thankfully it looks like Missouri has finally settled in to fall, and the forecast looks decent for the forseeable future, so I'm going to keep squeezing in rides wherever I can. Maybe even a lesson? IDK guys, let's not get too crazy yet.
Posted by TrainwreckInTeal at 5:00 AM