Well would you look at that? I actually managed a ride last night!
DH was running a bit late last night, so I got home and powered through chores. It was still about 40 degrees, and I checked the forecast for the rest of the week and it was only getting colder (it was 24 with a 'feels like 12' when I got up this morning) -- I have plans after work tonight and tomorrow, so I figured last night would be my best chance to ride before the weekend.
Ruby seemed less than impressed when I pulled her out and tacked her up, but she perked up when we walked in the arena. She was remarkably steady throughout the ride, although she was hyperaware of the goats any time we were on that side of the arena. The last time I rode her (Nov. 30 for the last no stirrup November ride -- bareback) she was so incredibly spooky she almost dropped me in the dirt more than once, so I was braced for some of that, but she didn't spook once. She did spend some time acting like she didn't know what a half halt was tracking right, and we had some canter zoomies. But she was basically perfect to the left, and gave me some nice lateral work pushing off and then back on to the rail, so it worked out.
In particular our left lead canter was so effortless and adjustable that I grinned like a loon the entire time -- and then for the downward transition I just had to think 'trot' and she was there. Magical! 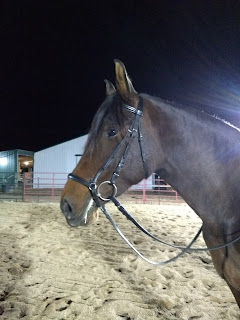 In an effort to discourage Cinna from lunging over the fence (because my leg was right about biting height haha), I carried a dressage whip -- our first lap of the arena she came charging over and a light tap on the end of her nose made her think twice about trying again. She did pace us up and down the fence a few times, but a sharp growl sent her back off to her hay pile. Her behavior was much improved over Monday so I think shortly she'll be ambivalent to what is going on in the arena. 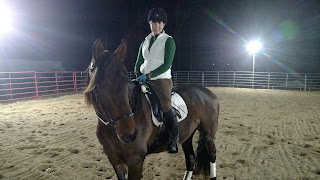 DH wanted to try out a new (to us) restaurant for dinner, so I kept the ride short and sweet -- but it felt so nice to feel like I'm developing some tiny semblance of a routine with everybody at home again :) now I just need to start alternating Ruby and Cinna's workouts...
The high today is only 34 so I have no regrets about my evening plans keeping me out of the barn, haha. But the weekend forecast looks promising, so maybe I can actually get some riding media!
Posted by TrainwreckInTeal at 7:00 AM