Whooo, look at me go! A post every day this week. And some of them even had content ;) hahaha.
Today I want to talk about hay feeders -- specifically, hay feeders in stalls. Although I try to keep my horses out as much as possible, it is inevitable that they spend some time in stalls. I don't have the quality or size of pasture necessary to leave them out 24/7, nor would that be healthy for Ruby and Cinna, who are quite easy keepers (unless they lived in grazing muzzles). Feeding hay has always been a PITA. Too much, and they waste it and use it as bedding (Cinna in particular loves to bed down in hay). Too little, and they finish quickly and then stand around with nothing to eat for hours (because I love them, but I'm not doing a daily 1 am feeding in the dead of winter) -- that's something I prefer not to happen, especially after dealing with ulcers with Topaz.

I've tried hay racks (my stalls came equipped with combination hay rack/swing out feeders). I've experimented with a variety of slow feed nets. I've tried tossing it directly on the floor. I've seen (but not tried) hay pillows and porta grazers, or wooden mangers. Some work better than others, some are complicated and annoying to use (not something I want if a horse is boarded, or if I have someone taking care of my animals while I'm away from the farm). Some are $$$$.
A few years back I was rotating through options trying to find something that Topaz wouldn't destroy that was also easy for the boarding barn staff to fill, and I came across the Health E-Z Hay Feeder at my local farm supply store. The $40 price tag gave me pause, but I had a gift card from a family member, so the end cost would be about the same as trying another net (the previous one had lasted less than a week -- she was an aggressive eater). The design also gave me some pause, but after checking out their website, I decided to give it a go. (Not super relevant to the story, but they're manufactured in St. Louis, which is where I grew up, so it made me feel good to support a "local" product!).
DH and I took it out to the boarding barn, where he installed it in her stall -- we hung it about wither height in the center of her stall. Our logic was that it would be hard for her to get her feet that high (although the holes are smaller than a size 00 shoe, which Topaz was NOT), and that if it was in the center of the stall, she couldn't brace it against the wall and inhale the hay. 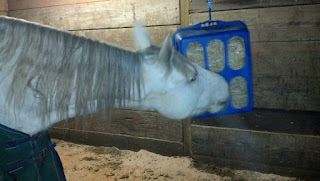 When I initially posted the photo on my FB page, hoards of people crawled out of the woodwork to tell me how dangerous the feeder was -- because you know, people just can't help themselves. However, I am nothing if not stubborn so I stuck with it, and I'm so glad I did. It kept Topaz occupied for hours, slowing down her hay consumption to a more sustainable level, and allowing me to keep food in front of her at all times. She also got a lot of amusement out of swinging it around her stall, but she was funny like that, haha.
Eventually I moved her back home, and the hay feeder ended up in my horse trailer tack room gathering dust (I was less inclined to use it at home because she was stalled way less than at the boarding barn). At an auction the next winter, someone consigned a brand new one of these feeders which I eagerly snapped up at wayyyyyy under retail.
The feeders were on my mind again after I moved Ruby home Sunday, because she has a tendency to inhale her hay in like 2 hours and then stand around bored. I don't want another bout of ulcers on my hands, and since I already had two of the feeders, I decided to break them out for Cinna and Ruby. They're both easy keepers and could use the challenge to keep them eating a little slower. So I hung them from the rafters and filled them up! It took a day or two, but now both girls have the hang of it.
Considering that the blue feeder still looks almost like new after Topaz abused it for months, I'm not super concerned about the longevity. Although I'd love to acquire more of these at bargain basement auction prices, I'd also happily pay retail now that I've used them.
How do you handle feeding hay in stalls? I'm always on the lookout for new ideas and ways to make horsekeeping at my house easier! :)
Posted by TrainwreckInTeal at 6:50 AM